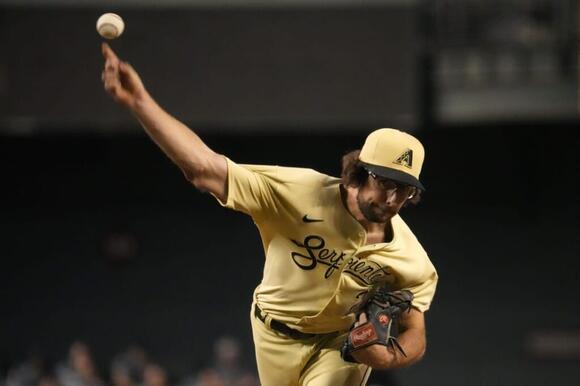 Zac Gallen pitched seven shutout innings and Ketel Marte and Daulton Varsho each homered to lead the Arizona Diamondbacks to a 10-1 victory over the Washington Nationals on Friday night in Phoenix.

Gallen (5-2) gave up just a pair of singles and no-hit the Nationals for 5 2/3 innings before Cesar Hernandez beat out a comebacker that deflected off Gallen’s glove and settled between the mound and second base. He didn’t walk a batter and struck out seven in picking up his first win since May 30.

Juan Soto had a line single leading off the seventh to extend his on-base streak to a major league-best 27 games and Hernandez also had a double to finish with two hits. Patrick Corbin (4-13) suffered his major league-leading 13th loss, allowing five runs on eight hits over five innings. He walked one and struck out seven.

Corbin allowed four consecutive hits during a four-run third for the Diamondbacks. Jordan Luplow made it 1-0 with an RBI single, driving in Perdomo, who started the rally with a single and advanced to second on a single by Kelly. Marte then followed with a three-run homer, a 423-foot drive to center.

Kelly extended the lead to 5-0 in the fourth with an RBI single, driving in Varsho, who had singled. Varsho made it 6-0 in the sixth with his 13th home run of the season, a 451-foot drive deep into the bleachers in right.

Marte tripled and scored on a Christian Walker sacrifice fly in the seventh to extend Arizona’s lead to 7-0. The Diamondbacks added three more runs in the eighth off reliever Victor Arano on an RBI single by Perdomo, a bases-loaded walk by Luplow and a sacrifice fly by Marte.

Washington’s lone run came in the ninth when Hernandez led off with a double, advanced to third on a wild pitch and scored on a ground out by Keibert Ruiz.

That was quick. Less than an hour after catching Aaron Judge’s 62nd home run ball at Globe Life Field in
ARLINGTON, TX・1 DAY AGO
Sportsnaut

It has finally happened. Star New York Yankees outfielder Aaron Judge is in the American League record books all by
BRONX, NY・1 DAY AGO
Sportsnaut

The New York Mets are planning to start Max Scherzer in Game 1 of their National League wild-card series with
QUEENS, NY・10 HOURS AGO

It was an unsurprising Sam Haggerty move. Trailing the Detroit Tigers by a run with two outs in the bottom
SEATTLE, WA・2 DAYS AGO
Sportsnaut

After a disappointing end to their faint wild-card hopes, the Milwaukee Brewers will have to regroup against Arizona ace right-hander
MILWAUKEE, WI・2 DAYS AGO
Sportsnaut

The 2022 Major League Baseball season is drawing to a close and that means it’s time for the MLB playoffs.
MLB・8 HOURS AGO

Mets stay alive — barely — in division race ahead of DH vs. Nats

Jose Ramirez had four hits and two RBIs as the Cleveland Guardians headed into the postseason on a winning note,
KANSAS CITY, MO・11 HOURS AGO

Luis Arraez walked twice and doubled in his final at-bat while wrapping up his first American League batting title as
MINNEAPOLIS, MN・5 HOURS AGO
Sportsnaut

Ty France grounded a tiebreaking, bases-loaded single down the right field line with one out in the bottom of the
SEATTLE, WA・10 HOURS AGO

There promises to be a ton of managerial moves around MLB with the regular season now over. Mike Matheny is
KANSAS CITY, MO・7 HOURS AGO