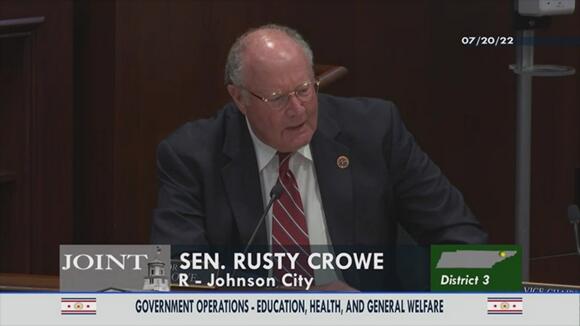 While speaking during a subcommittee meeting in Nashville on Wednesday, Crowe said some doctors, hospitals and groups like the Tennessee Medical Association have reached out to him with concerns about the law , which is set to go into effect in mid-August. Once it does, anyone who performs or attempts to perform an abortion can be charged with a Class C felony.

The so-called trigger ban makes no exceptions for rape, incest or sex trafficking. It does create an “affirmative defense to prosecution” if an abortion “was necessary to prevent the death of the pregnant woman or to prevent serious risk of substantial and irreversible impairment of a major bodily function of the pregnant woman.”

Crowe, who chairs the Health and Welfare Committee, said medical professionals and organizations want the law to be clearer “to make sure that we don’t get our docs in trouble when they’re trying to follow the law.”

“There are some groups getting together now to look at it in a very prudent way, just to make sure we don’t get our docs in a situation wherein they think they’re doing the right thing and possibly they’re not,” Crowe said. “So, there will be some fine-tuning, as we normally do, you know, with different bills. But I think that we all know what the intent Tennessee has with that bill, but let’s make sure we do it in a way that we don’t get some of our docs in trouble.”

The trigger ban was passed by the General Assembly in 2019. Crowe was among several senators who co-sponsored the bill, which would ban abortions in the state in event that the Supreme Court overturned Roe v. Wade.

A Vanderbilt University poll conducted in the spring showed that 80% of Tennessee voters were OK with abortion being either completely legal or legal under certain circumstances, such as rape or incest.

And yet again, the Republican politicians of Tennessee, refuse to represent the will of the majority of the people. 80% of us have clearly stated we accept abortion.

it's not good to make hard rules you always have exceptions, abortion is not meant to be for birth control.

Forcing their religious beliefs on everyone. Religion a man made construct for power and control of the masses.

The bill would criminalize women who file a 'false report' to receive an abortion, even if they do so unknowingly.
TENNESSEE STATE・3 DAYS AGO
WJHL

Bill would allow lane splitting in traffic in Tennessee

More than one thousand anti-abortion advocates, including Governor Glenn Youngkin, flooded the grounds of the Virginia State Capitol for the first March for Life since the fall of Roe v. Wade.
VIRGINIA STATE・4 DAYS AGO
WJHL

Certain details conflict with what the coroner in the case, and police, initially said.
IDAHO STATE・1 DAY AGO
WJHL

WASHINGTON (WJHL) — Rep. Diana Harshbarger has introduced legislation that she says will help solve the opioid addiction epidemic by closing a loophole regarding suspicious drug shipments. The Northeast Tennessee congresswoman introduced the bill last week, which would require drug manufacturers and distributors to halt suspicious orders of controlled substances. Currently, they are only required […]
TENNESSEE STATE・4 DAYS AGO
WJHL

A massive high altitude balloon passed through the St. Louis area Friday afternoon. A NOAA computer model show which states it could pass over next.
NASHVILLE, TN・2 DAYS AGO
WJHL

BRISTOL, Tenn. (WJHL) — A Bristol man was arrested Saturday night and accused of murder following an incident on Clark Drive, according to the Sullivan County Sheriff’s Office. A release from Sullivan County Police Captain Andy Seabolt says Benjamin Oliver Sly, 26, of Bristol is charged with one count of first-degree murder and one count […]
BRISTOL, TN・16 HOURS AGO
WJHL

TAZEWELL, Va. (WJHL) – A young child and his father have died after what the Tazewell County Sheriff’s Office (TCSO) is calling a ‘tragic’ incident that occurred in the Moore Mountain Road area on Feb. 3. According to a release from the TCSO, Tazewell County 911 received a call from the mother of two-year-old Thomas […]
TAZEWELL COUNTY, VA・1 DAY AGO
WJHL

One dead, police officer in ‘extremely critical condition’ after shooting at Memphis library

UPDATE: The Memphis officer has been upgraded from extremely critical to a stable condition. This story has been updated to reflect the identity of the deceased man. MEMPHIS, Tenn. (WREG) — One person is dead and a Memphis police officer was critically injured in a shooting Thursday afternoon at the Poplar-White Station library in East […]
MEMPHIS, TN・3 DAYS AGO
WJHL

HAWKINS COUNTY, Tenn. (WJHL) — Donald Wells spoke on camera for the first time since he was released from jail three months ago. An Amber Alert for his daughter, Summer Wells, remains active 19 months after it was first issued. “We have to prepare ourselves for a worst-case scenario. You know, we could always hope […]
HAWKINS COUNTY, TN・3 DAYS AGO
WJHL

Over $250,000 of counterfeit clothing seized from Knoxville store

A Knoxville man is facing charges including money laundering after officers conducted a search of the story he was operating, according to the Knox County Sheriff's Office.
KNOXVILLE, TN・4 DAYS AGO
WJHL

JOHNSON CITY, Tenn. (WJHL) — Some East Tennessee State University students are concerned about a bill that would allow guns on school property. Sen. Joey Hensley (R-Hohenwald) introduced a bill that would allow bringing guns on college and K-12 school campuses, deleting where it prohibits it in current code. This has students worried, including former […]
JOHNSON CITY, TN・3 DAYS AGO
WJHL

RICHMOND, Va. (WJHL) – A bill that could widely increase access to broadband internet service in rural parts of Virginia has cleared all hurdles in the state Senate. A release from the Virginia, Maryland, and Delaware Association of Broadband Cooperatives (VMDABC) states Senate Bill 1029 passed the Virginia Senate with bipartisan support. The bill, sponsored […]
VIRGINIA STATE・4 DAYS AGO
WJHL

WCSO: Man arrested for burglary, theft of a motor vehicle

JONESBOROUGH, Tenn. (WJHL) – A man was arrested Saturday after being found in possession of stolen items, according to the Washington County Sheriff’s Office (WCSO). Brandon Ely, 20, was arrested and charged with burglary, theft of a motor vehicle and violation of probation, according to a release from the WCSO. Deputies found Ely in the […]
TELFORD, TN・15 HOURS AGO
WJHL

JOHNSON CITY, Tenn. (WJHL) — A man has been arrested following the alleged theft of two trailers in Johnson City. According to the Johnson City Police Department (JCPD), George Hendricks was arrested after an investigation revealed his involvement in the theft of a trailer from Lamons Court on Dec. 21 and another trailer theft from […]
JOHNSON CITY, TN・3 DAYS AGO
WJHL

Unicoi Co. sheriff wants to hear about your ex’s crimes

ERWIN, Tenn. (WJHL) – Unicoi County Sheriff Mike Hensley wants to set your ex up with a date. A court date, that is. In a Facebook post, Hensley said that his office is offering a “Valentine’s Day Weekend Special” for residents to turn in their ex-lovers. “Do you have information on an ex-Valentine involved in […]
UNICOI COUNTY, TN・3 DAYS AGO
WJHL

KINGSPORT, Tenn. (WJHL) — Around ten Kingsport students will face an extra challenge when they begin TCAP testing this spring. Tennessee’s controversial third-grade retention law will hold children learning English as a second language to the same testing standard as other students, provided that they’ve received English instruction for the past two years. Kingsport Assistant […]
KINGSPORT, TN・4 DAYS AGO