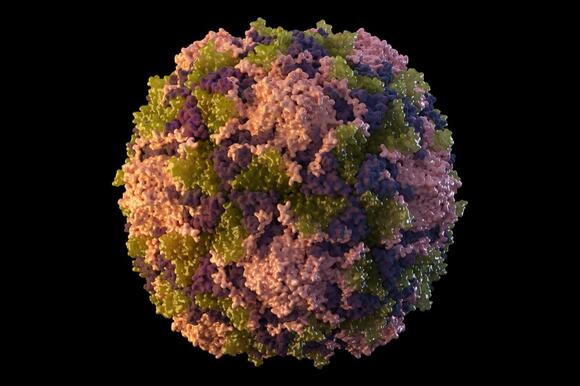 Officials said the patient, who lives in Rockland County, had developed paralysis. The person developed symptoms a month ago and did not recently travel outside the country, county health officials said.

It appears the patient had a vaccine-derived strain of the virus, perhaps from someone who got live vaccine — available in other countries, but not the U.S. — and spread it, officials said.

The person is no longer deemed contagious, but investigators are trying to figure out how the infection occurred and whether other people were exposed to the virus.

Most Americans are vaccinated against polio, but this should serve as a wake-up call to the unvaccinated, said Jennifer Nuzzo, a Brown University pandemic researcher.

“This isn’t normal. We don’t want to see this," Nuzzo said. "If you’re vaccinated, it’s not something you need to worry about. But if you haven’t gotten your kids vaccinated, it’s really important that you make sure they’re up to date.”

Health officials scheduled vaccination clinics in New York for Friday and Monday, and encouraged anyone who has not been vaccinated to get the shots.

“We want shots in the arms of those who need it,” Rockland County Health Commissioner Dr. Patricia Schnabel Ruppert said at a Thursday news conference.

Polio was once one of the nation's most feared diseases, with annual outbreaks causing thousands of cases of paralysis. The disease mostly affects children.

Vaccines became available starting in 1955, and a national vaccination campaign cut the annual number of U.S. cases to less than 100 in the 1960s and fewer than 10 in the 1970s, according to the Centers for Disease Control and Prevention.

In 1979, polio was declared eliminated in the U.S., meaning there was no longer routine spread.

Rarely, travelers have brought polio infections into the U.S. The last such case was in 2013, when a 7-month-old who had recently moved to the U.S. from India was diagnosed in San Antonio, Texas, according the federal health officials. That child also had the type of polio found in the live form of vaccine used in other countries.

There are two types of polio vaccines. The U.S. and many other countries use shots made with an inactivated version of the virus. But some countries where polio has been more of a recent threat use a weakened live virus that is given to children as drops in the mouth. In rare instances, the weakened virus can mutate into a form capable of sparking new outbreaks.

U.S. children are still routinely vaccinated against polio with the inactivated vaccine. Federal officials recommend four doses: to be given at 2 months of age; 4 months; at 6 to 18 months; and at age 4 through 6 years. Some states require only three doses.

According to the CDC's most recent childhood vaccination data, about 93% of 2-year-olds had received at least three doses of polio vaccine.

Polio spreads mostly from person to person or through contaminated water. It can infect a person’s spinal cord, causing paralysis and possibly permanent disability and death.

Polio is endemic in Afghanistan and Pakistan, although numerous countries in Africa, the Middle East and Asia have also reported cases in recent years.

Rockland County, in New York City's northern suburbs, has been a center of vaccine resistance in recent years. A 2018-2019 measles outbreak there infected 312 people.

Last month, health officials in Britain warned parents to make sure children have been vaccinated because the polio virus had been found in London sewage samples. No cases of paralysis were reported.

The Associated Press Health and Science Department receives support from the Howard Hughes Medical Institute’s Department of Science Education. The AP is solely responsible for all content.

Get your shots. Have your kids get their shots. Polio is nothing to scoff at, unless you want yourself/your kids paralyzed or dead. Some of us old folks remember the days of it running rampant.

I have to get COVID SHOTS but everyone coming across the BORDER is bringing in all the old diseases and PESTILENCE. Wow how many of you in GOVERNMENT graduated from the SCHOOL OF COMMEN SENSE. YOU ALL MAKE ME SICK 🤢🤮🤢🤮🤬🤬🤬

Report urges improvements in US approach to hostage cases

Japan to pay up to $320M for US company's chip production

Japan said it is providing a major U.S. chipmaker a subsidy of up to $322 million to back its plan to produce advanced memory chips at a Hiroshima factory
BUSINESS・23 HOURS AGO
San Diego Union-Tribune

Biden vows Russia won't 'get away with' Ukraine annexation

The United States and its allies are hitting back at Russia's annexation of four more Ukrainian regions, slapping sanctions on more than 1,000 Russian individuals and companies
POLITICS・12 HOURS AGO
San Diego Union-Tribune

The Kremlin and Russian state media are aggressively pushing a baseless conspiracy theory blaming the U.S. for damage to natural gas pipelines in the Baltic Sea
U.S. POLITICS・13 HOURS AGO

Most High Court judges will be women in Australian first

CHARLESTON, S.C. (AP) — A revived Hurricane Ian pounded coastal South Carolina on Friday, ripping apart piers and flooding streets after the ferocious storm caused catastrophic damage in Florida, trapping thousands in their homes and leaving at least 27 people dead. The powerful storm, estimated to be one of the costliest hurricanes ever to hit the U.S., has terrorized people for much of the week — pummeling western Cuba and raking across Florida before gathering strength in the warm waters of the Atlantic Ocean to curve back and strike South Carolina. While Ian’s center came ashore near Georgetown, South Carolina, on Friday with much weaker winds than when it crossed Florida’s Gulf Coast earlier in the week, the storm left many areas of Charleston’s downtown peninsula under water. It also washed away parts of four piers along the coast, including two at Myrtle Beach. Online cameras showed seawater filling neighborhoods in Garden City to calf level. As Ian moved across South Carolina on its way to North Carolina Friday evening, it dropped from a hurricane to a post-tropical cyclone.
FLORIDA STATE・45 MINUTES AGO
San Diego Union-Tribune

Vegas hero survived mass shooting but died of suicide; parents now looking for those he saved

Scotty Pettersen survived the Las Vegas massacre five years ago only to die by suicide. Now his parents are trying to find the people he saved.
LAS VEGAS, NV・25 MINUTES AGO
San Diego Union-Tribune

A United States federal judge has dismissed a lawsuit brought by the Mexican government against U.S. gun manufacturers that argued their commercial practices has led to bloodshed in Mexico
CONGRESS & COURTS・7 HOURS AGO
San Diego Union-Tribune

Western countries are leading a simultaneous push at the U.N.'s top human rights body to scrutinize human rights in two of the world's most influential countries: China and Russia
WORLD・2 HOURS AGO

A street in San Francisco will now be renamed after a 84-year-old man whose death brought national attention to the rise of anti-Asian hate last year.
SAN FRANCISCO, CA・44 MINUTES AGO
San Diego Union-Tribune

Biden on ending hunger in US: 'I know we can do this'

President Joe Biden says his administration's goal of ending hunger in the U.S. by the end of the decade is ambitious but doable, if only the nation would work together
U.S. POLITICS・2 DAYS AGO
San Diego Union-Tribune

Malaysia aims to add US flights after safety rating boost

Cubans protest in Havana for 2nd night over lack of power

Groups of Cubans have protested in the streets of Havana for a second night, decrying delays in fully restoring electricity three days after Hurricane Ian knocked out power across the island
ENERGY INDUSTRY・4 HOURS AGO
San Diego Union-Tribune

Jimmy Carter, already the longest-living U.S. president in history, will celebrate his 98th birthday Saturday with family and friends in Plains, the tiny Georgia town where he and his wife, 95-year-old Rosalynn, were born
PLAINS, GA・4 HOURS AGO
San Diego Union-Tribune