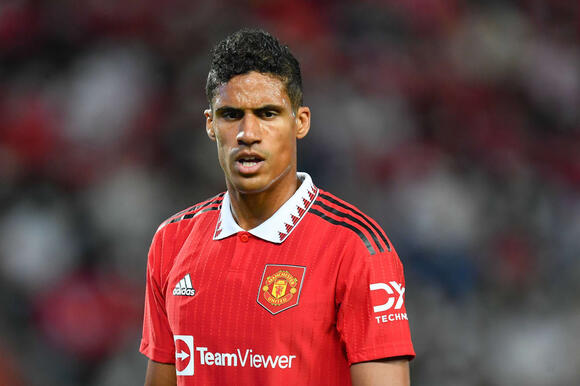 Varane left a Real Madrid team that went on to win La Liga and the UEFA Champions League last season.

Raphael Varane has insisted that he remains happy with the decision he made last summer to leave Real Madrid for Manchester United.

Varane arrived at Old Trafford on a wave of optimism as part of a 2021 splurge that also saw United sign Jadon Sancho and Cristiano Ronaldo.

It was hoped that United's trio of big-name additions could inspire them to mount a serious title challenge.

But instead United endured their worst season in Premier League history, while Real went on to win La Liga and the UEFA Champions League without Varane.

Nevertheless, Varane does not regret leaving Madrid for Manchester and is feeling upbeat about the 2022/23 season under new manager Erik ten Hag.

Asked if he may have made the wrong choice by joining United last year, Varane told BBC Sport : "No, absolutely not."

He added: "In football, you have to challenge yourself and try to improve. I wanted to live another experience after 10 years in the same place.

"The Premier League is absolutely fantastic and Manchester United are a great club. There was no doubt about my decision."

United ended last season by losing four of their final six games, but they have recorded some encouraging results in their pre-season friendlies this summer.

Ten Hag's side have played three warm-up games and won all three by an aggregate score of 11-2.

"Confidence is important and we lost confidence when we lost some games. But I think we have great potential.

"The new manager is very positive. He wants this energy and to press high up the pitch, with more space behind our backs. That is maybe more offensive but it is football we really enjoy, so that is a good start."

Ronaldo appeared to slap a mobile phone out of a 14-year-old fan's hand as he walked off the pitch following United's 1-0 loss to Everton on April 9.
PREMIER LEAGUE・2 DAYS AGO
Futbol on FanNation

Luke Harris, 17, is said to have caught the attention of Chelsea officials in August when he scored a hat-trick for Fulham against the Blues at under-21 level.
PREMIER LEAGUE・4 HOURS AGO
Futbol on FanNation

In front of 47,367 fans, Vivianne Miedema scored twice in a 4-0 win for the Gunners.
WORLD・15 HOURS AGO
Futbol on FanNation

Diogo Dalot and Bruno Fernandes were the stars of the show against the Czech Republic.
SOCCER・16 HOURS AGO

The Three Lions have now failed to record a win in five consecutive competitive matches for the first time since 1992.
UEFA・1 DAY AGO
Futbol on FanNation

De Bruyne said in the build-up to Thursday's game that the prospect of playing Wales again was "a little bit boring".
SPORTS・2 DAYS AGO
Futbol on FanNation

Richarlison has now scored 16 goals for Brazil, including six in his last five international games.
PREMIER LEAGUE・1 DAY AGO