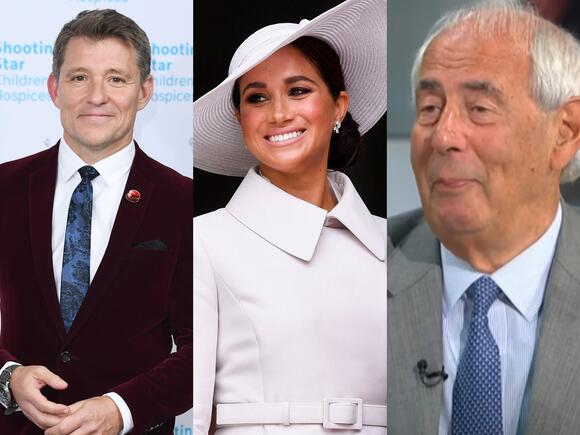 Bower is the author of a new unauthorised biography, Revenge: Meghan, Harry and the war between the Windsors , which explores an alleged “rift” between the Duke and Duchess of Sussex and other members of the Royal Family.

Bower appeared on Good Morning Britain on Thursday (21 July), telling hosts Ben Shephard and Charlotte Hawkins that he spoke to nearly 80 insiders to collect information for the book.

The book includes several claims about Meghan and alleges that the Duchess “manipulated” journalist Sam Kashner during a 2017 interview with Vanity Fair .

Challenging Bower on his portrayal of the Duchess, Shephard said Meghan was “an independently successful Hollywood actress, famous in her own right” before meeting Prince Harry .

Prior to her marriage to Harry, Meghan appeared in the US TV series Suits as Rachel Zane. She held the role for six years.

He asked why she should “suddenly be judged” for having “forthright views”.

“She’s just trying to control her brand and control who she is, she’s not the first well-known person to do that, is she?” Shephard said.

Bower replied: “Not at all, but we always say she was a famous actress, she wasn’t, she was a third-rate...”

Shephard interjected and came to Meghan’s defence, telling viewers: “No, that’s not true. She was a very famous actress, and she had a high profile in Hollywood and Suits is a series streamed all over the world, so people knew who she was.”

Bower responded to say he “won’t argue”, but that he disagrees with Shephard’s view.

Earlier this week, Kashner wrote a letter to The Times dismissing Bower’s claims after the newspaper published an excerpt from the book.

“Sir, I’m afraid Tom Bower didn’t convey my admiration and respect for Meghan Markle in the excerpt from his new book in The Times on Saturday,” Kashner said, adding that he found Meghan to be “exceptionally warm and gracious”.

“A belated congratulations to Prince Harry for taking such an extraordinary woman as his bride. Theirs is clearly a love match, so maybe we should stop piling on and let the couple live their life in peace.”

I don't know about her acting skills..mediocre, from what little I've seen...I never even heard of her before she was engaged to Harry

There is no defense for the Gold Digger Serf, no defense

Queen Margrethe II of Denmark has announced her intention to strip four of her grandchildren of their royal titles, a decision that left some members of the Danish royal family shocked and “saddened”. The monarch’s decision was announced in a statement shared by the royal palace on Wednesday,...
EUROPE・16 HOURS AGO
The Independent

Pierce Brosnan has revealed how Robin Williams saved one of his most dreaded Mrs Doubtfire scenes.The actors starred together in the 1994 comedy, which was directed by Chris Columbus, with former Bond star Brosnan reflecting on the experience in a new interview.Discussing his past credits in a recent interview with GQ, Brosnan spoke specifically about a scene in the film in which he has a lime lobbed at the back of his head by Williams’s character, Daniel Hillard, while he is carrying a drinks tray.Hillard does this after Brosnan’s character, Stu, the new boyfriend of his ex-wife (Sally Field),...
CELEBRITIES・2 DAYS AGO
BuzzFeed

"I’m not surprised to hear that it’s yet another movie fetishizing female pain, even in death."
MOVIES・10 MINUTES AGO

Warning: MASSIVE SPOILERS AHEAD
MOVIES・10 MINUTES AGO
The Independent

‘She was deemed mad and unpredictable’: The day Sinéad O’Connor tore up a photo of the Pope on Saturday Night Live

Her green eyes gleaming with determination, Sinéad O’Connor stares into the cameras at the Saturday Night Live studio – in the bowels of the Rockefeller Centre in Manhattan – and holds a photograph in front of her face.Nobody blinks or says a word. Around her, the backstage bustle continues uninterrupted. The picture is of a Brazilian street child shot dead by police death squads. It’s 3 October 1992 and O’Connor is rehearsing her cover of Bob Marley’s “War” for her performance on SNL that night. The child’s photo is a calculated distraction. For her real appearance, she’ll proffer another image...
ENTERTAINMENT・2 HOURS AGO
The Independent

King Charles III has decided not to attend the international climate change summit in Egypt next month, fueling speculation that the new monarch will have to rein in his environmental activism now that he has ascended the throne.The Sunday Times newspaper reported that the decision came after Conservative Prime Minister Liz Truss objected to Charles attending the conference, known as COP27, when she met with the king last month at Buckingham Palace. While there was no official rebuttal, other British media quoted unidentified palace and government sources as saying that Charles made his decision after consultation with the prime...
ENVIRONMENT・2 HOURS AGO
BuzzFeed

19 True Crime Dramas That Seem Like They Should Be Fiction, But Are Actually Based On Facts

Here's a bunch of dramas you may wanna watch while you're in the mood for true crime.
TV SERIES・15 MINUTES AGO