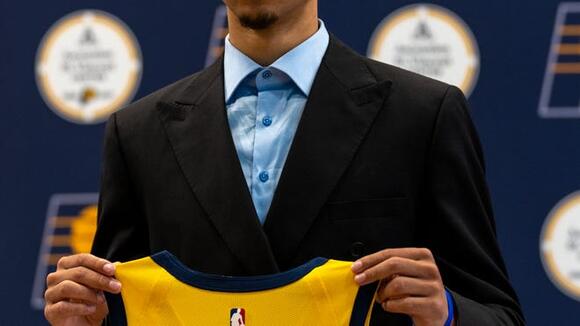 Nembhard's contract guarantees $6.4 million in the first three years, which is the most ever for a collegiate second-round pick, per Givony. ESPN's Bobby Marks added that Nembhard received more guaranteed money than first-round picks 18-30.

Nembhard is the second Pacers draft pick to sign a deal, joining No. 6 pick Bennedict Mathurin. Kendall Brown, the 48th pick, is the lone draftee who hasn't been signed.

"The word that stands out for me is feel. (Nembhard) has just got an amazing feel for the game,” Pacers coach Rick Carlisle said during the draft picks' introductory news conference. “I love point guards. I've had the real privilege of working with some great, great point guards. I mean, Jason Kidd, we won a championship (in Dallas) with Jason Kidd, we had J.J. Barea on that team. Jason Terry was a point guard that converted to a scoring guard. I see some of all those qualities in Andrew. Love his size, love playmakers that can control the game, not only with their skill but with their mind.”

Nembhard played four years in college, two at Florida and two at Gonzaga. The 22-year-old commanded the Zags' offense with career-highs of 11.8 points and 5.8 assists while shooting a career-high 38.3% on 3s during the 2021-22 season.

He followed that up by averaging 6.6 points and a team-high 5.0 assists in the Pacers' five Summer League games in Las Vegas.

"The last few years I've been really fortunate to win a lot of games and be a part of a team that has a great culture and knows how to kind of come to work every day and get better," Nembhard said at his introductory news conference. "I think I can just be another piece of the puzzle here that can connect guys and just be myself."

Peyton Manning tells Pat McAfee about the origin of 'Omaha'

Peyton Manning is a two-time Super Bowl champion and a Pro Football Hall of Fame quarterback. That's all great, but nowadays you're more likely to see him on a commercial or casually analyzing NFL games with his brother, Eli. He's also the author, so to speak, of a popular random...
OMAHA, NE・2 DAYS AGO
IndyStar | The Indianapolis Star

Colts LB Shaquille Leonard is dealing with more than a concussion

INDIANAPOLIS -- Shaquille Leonard will not play against the Broncos on Thursday as the Colts work through a short week before a road trip to Denver, but he's also dealing with more than originally known. The Colts All-Pro linebacker broke his nose on the play that gave him a brain...
INDIANAPOLIS, IN・1 HOUR AGO
IndyStar | The Indianapolis Star

INDIANAPOLIS — The Colts had to make a move. Indianapolis has been taking advantage of the NFL’s expanded practice squad rules for three weeks by keeping kicker Chase McLaughlin there, elevating him on game day and protecting a spot on the 53-man roster. But the NFL’s rules only...
INDIANAPOLIS, IN・2 HOURS AGO
IndyStar | The Indianapolis Star

Peyton Manning prefers to talk offense, but he gave Los Angeles Rams linebacker Bobby Wagner props Monday night for tackling a protestor who had run onto the field during the Rams' game against the San Francisco 49ers. Peyton initially called the intruder a "streaker," though the person was clothed. He...
NFL・20 HOURS AGO

The latest update on Colts RB Jonathan Taylor (ankle) and his status vs. Broncos

INDIANAPOLIS — From the sounds of it, Jonathan Taylor is going to use every second of time available before making any decisions on his sprained right ankle for Thursday night’s game against the Denver Broncos. The Colts’ star running back has never missed a game due to injury,...
INDIANAPOLIS, IN・3 HOURS AGO
CBS 42

INDIANAPOLIS -- The Maniac is officially back. Colts All-Pro linebacker Shaquille Leonard is among the active players for Sunday's 1 p.m. game against the Titans at Lucas Oil Stadium. After practicing for weeks through a back issue stemming from a June surgery, he will take the field and start at middle linebacker for the first time in Gus Bradley's defense.
INDIANAPOLIS, IN・2 DAYS AGO
IndyStar | The Indianapolis Star

Doyel: College football is big business. So big buyouts be damned if you want to keep up.

Wisconsin fired Paul Chryst on Sunday, fired him five games into the 2022 college football season, fired him with a career record of 67-26. Just sent him packing, humiliated the former Wisconsin quarterback, as if his previous seven seasons — all ending in bowl games, the Badgers winning six of those — hadn’t happened. ...
MADISON, WI・1 DAY AGO

INDIANAPOLIS — The Colts have made a change to the starting offensive line, a unit that has struggled mightily through the first three weeks of the season, for this week’s AFC South showdown against the Tennessee Titans. Second-year guard Will Fries was lined up with the starters at...
INDIANAPOLIS, IN・2 DAYS AGO
IndyStar | The Indianapolis Star

'They know what time it is': Ex-Colts DL Denico Autry gets crucial sack vs. former team

INDIANAPOLIS -- Late in the fourth quarter, the Tennessee Titans defense needed a sack to push the Indianapolis Colts out of field goal range. Going through All-Pro left guard Quenton Nelson seems like the least likely way to get pressure on Colts quarterback Matt Ryan, but former Colts defensive lineman Denico Autry knew the Titans front four could scheme someone into Indy's backfield.
INDIANAPOLIS, IN・2 DAYS AGO
IndyStar | The Indianapolis Star

Indianapolis Colts linebacker Shaquille Leonard was taken to the locker room Sunday after being inadvertently hit by teammate Zaire Franklin in the second quarter. He was ruled out with a concussion. The Tennessee Titans scored on the play, taking a 24-3 lead. Leonard, in his fifth year, made his season debut Sunday after missing...
INDIANAPOLIS, IN・2 DAYS AGO
IndyStar | The Indianapolis Star

'Time to put these horses down?' Colts tumble in NFL rankings

The Indianapolis Colts hit the (almost) quarter pole of season looking up at most of the NFL. Offensive struggles have left them with a 1-2-1 record, and early optimism has mostly faded among national observers. Here's where the Colts stand entering Week 5. ...
INDIANAPOLIS, IN・7 HOURS AGO

Nobody is feeling good about themselves as the Indianapolis Colts visit the Denver Broncos in NFL Week 5 action on Thursday Night Football. The Colts (1-2-1) have made a habit of falling behind early and trying to rally. They have trailed at halftime in all their games, including a 14-point hole that yielded a 24-17 loss to the Tennessee Titans last week. ...
INDIANAPOLIS, IN・7 HOURS AGO