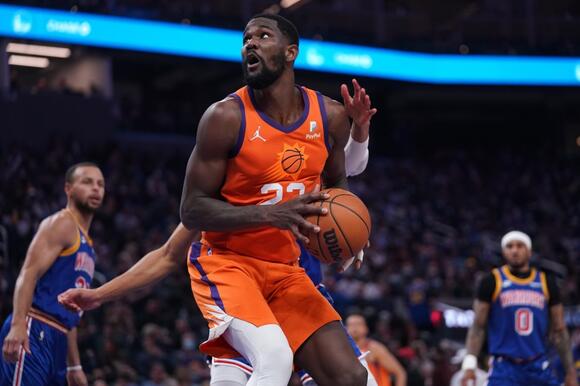 Phoenix Suns center Deandre Ayton was perhaps the most popular person of the NBA offseason thanks to his status as a restricted free agent. At times, it felt as if Ayton was one of the trending topics of the world, basketball or not.

Ayton's case was rare, as he was just the second No. 1 pick to hit restricted free agency since the NBA lottery system was implemented.

The talent was flashed on several occasions, and you saw exactly what the Suns did when they drafted him over the likes of Luka Doncic and Trae Young. Ayton molded himself into a key part of squad that helped turn the tide of the franchise almost overnight, going from their impressive streak in the bubble to the NBA Finals before having the league's best regular season record.

However, those aforementioned accolades failed to result in Phoenix's first NBA title, and some believe Ayton will need to hit the next level in order for the Suns to reach that goal.

There was fog around Ayton's future for a long time, and to be quite honest, the organization didn't exactly help that go away. The Suns failed to reach an extension with Ayton early last season, and reportedly tried to deal him at both the trade deadline and in recent sign-and-trade talks, both with the Indiana Pacers.

Factor in the Game 7 meltdown between he and coach Monty Williams on top of the ESPN article that displayed his love for video games (and getting no sleep due to that sometimes) and you've got yourself quite the target for rumors and gossip.

Yet all that talk and uncertainty ultimately led to nothing, as the Suns retained Ayton immediately upon receiving an offer sheet from the Pacers to the tune of a four-year deal worth $133 million.

Ayton can't be dealt until Jan. 15 of next year, but general manager James Jones made it sound like the Suns planned on keeping their big man around for the long haul.

"I'm one to just be direct. And if you're convicted, if you know what you want to do, you do it. But if there's any doubt from anyone that we wanted him, I think that the matching did that. It was urgent for us. It was important. It was critical for us. So, we just wanted to make sure that we handled our business quickly," said Jones in an interview with ESPN's Marc J. Spears.

Most of the article features the perspective of Ayton, who touched on a variety of topics from potentially playing in Indiana to what gaining that nice contract means for the present and future of his family:

Ayton told Spears he was "anxious" while waiting for his future to unravel itself. The Pacers showed interest from the jump, but it took about two weeks for anything to materialize in the form of an offer.

"This is a blessing. This contract not only has generational impact for my family, but also with the way we are able to work in the Phoenix community and home in the Bahamas. That is the things that we go by," said Ayton.

"I've come to understand that this is a business. So, I was more anxious to know the end of the result so I could focus, move on and just get back to work. I just treated everything like a business. Just keep being professional, approach everything with professionalism and not looking too deep into it."

In the article, Ayton was described as "enthusiastic" to potentially join the Pacers and assist in their rebuild.

Yet at the end of the day, Ayton was simply excited to get a deal he wanted and is now focused on winning a title in Phoenix.

"The shift in free agency brought a lot of uncertainty through the whole process," Ayton said. "I got to give a lot of respect to the Pacers organization. They were aggressive from the start and showing a lot of love. And we agreed to a max offer sheet. The Suns matched. Now, I'm back in Phoenix as a Sun.

"I'm happy. The process is over. I put all this behind me and focus on chasing a championship this upcoming season with my brothers."

After putting in work during the offseason, Ayton is off to celebrate his new contract (and his upcoming birthday on July 23) with his family back in the Bahamas.

"I want to keep doing what I'm doing being the face of my family and sharing," Ayton said. "We notice the things going around us in the community and we are willing to help in any way we can possible. That is one of the things my mom kept me on and that's what I stand by."

Thank you for making Inside The Suns your destination for Phoenix Suns news. Please be sure to give us a like on Facebook, and follow us on Twitter @InsideTheSunsSI for more news, updates, analysis and more!

The Adelaide 36ers traveled to the Valley and upset the Phoenix Suns in the NBA preseason, and the world of basketball had a few words.
PHOENIX, AZ・13 HOURS AGO
Inside The Suns

Devin Booker had a message for everybody following Phoenix's preseason loss to the Adelaide 36ers.
PHOENIX, AZ・3 HOURS AGO
Inside The Suns

Suns Must Look at the Positives After Preseason Blunder

Despite a shocking preseason loss to the Adelaide 36ers, the Suns have no reason to panic.
PHOENIX, AZ・12 HOURS AGO
Inside The Suns

The Phoenix Suns were certainly surprised when the Adelaide 36ers upset them in their preseason opener. Perhaps it was needed.
PHOENIX, AZ・11 HOURS AGO

Suns May Sell for NBA Record Amount, per Report

The Phoenix Suns may see a whopping final price tag in their new sale, according to NBA analyst Marc Stein.
PHOENIX, AZ・4 HOURS AGO
Inside The Suns

Phoenix Suns shooting guard Devin Booker, with quite the car collection himself, asked his Twitter followers what their favorite cars were.
PHOENIX, AZ・1 DAY AGO
Inside The Suns

The Phoenix Suns opened their preseason against the Adelaide 36ers. Here's how the action unfolded.
PHOENIX, AZ・20 HOURS AGO