The 37-year-old has hosted a weekly Sunday morning programme on the station since 2018.

The move comes as the latest series of ITV dating show Love Island secured its biggest launch audience since 2019. 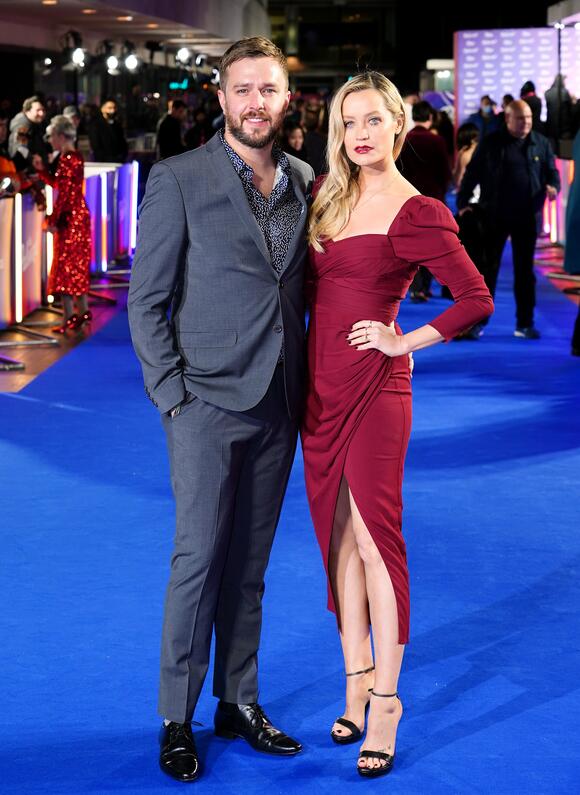 ITV has also announced there will be two series of the show in 2023 – a winter series in South Africa and a summer series in Majorca – with Whitmore likely to host both.

The Irish presenter, who started her career reading news bulletins for MTV in her home country, has hosted the show since 2020 after taking over from close friend and original presenter Caroline Flack.

Heidi Dawson, controller, BBC Radio 5 Live, said: “Laura has made the difficult decision to leave her weekend show after a brilliant four years.

“We’d like to thank her for the energy, insight and humour she has brought to this programme and look forward to working with her again in the near future.”

– BBC Radio 5 Live will launch a new Sunday morning show combining sport and current affairs discussion, which will lead into the afternoon of live football commentaries.

Prince Harry and Meghan MarkleTown and Country screenshot. Prince Harry and Meghan Markle have been blamed for a lot of issues related to the royal family and a new book is accusing the Duke and Duchess of Sussex of something quite interesting. Royal correspondent and author Katie Nicholl is causing quite a stir with "The New Royals: Queen Elizabeth's Legacy and The Future of the Crown," Nicholls insists that "Megxit," caused more harm than anyone realized and that Harry and Meghan leaving the Uk for the US has placed "an unfair burden on the Prince and Princess of Wales' three young children"..
1 DAY AGO
iHeartRadio

Royal fans are talking about a quick moment where Camilla, Queen Consort, seemingly lost her temper with Prince William and Kate Middleton's children. The moment happened during Queen Elizabeth II's state funeral on Monday, September 19th. As members of the Royal Family gathered outside of Wellington Arch to watch as...
CELEBRITIES・9 DAYS AGO
The Independent

Actor Robert Cormier, best known for roles in Heartland and Netflix’s Slasher, has died aged 33. The Canadian performer died on Friday (23 September), according to his obituary. His sister later told The Hollywood Reporter that Cormier died in hospital in Etobicoke, Ontario, of injuries obtained following a fall.
CELEBRITIES・2 DAYS AGO
RadarOnline

King Charles III hasn't shut down the idea of giving Prince Harry's children royal highness status, but he wants something in return. RadarOnline.com has learned Britain's 73-year-old monarch is willing to bestow Harry and Meghan Markle's kids — son Archie, 3, and daughter, Lilibet, 1 — with prince and princess titles but only if he knows he can "trust" the Duke and Duchess of Sussex.
U.K.・6 DAYS AGO

Hayden Panettiere has opened up about the “horrifying” moment when her only daughter asked other women if she could call them “Mommy”.The Nashville actress spoke about the moment to Jada Pinkett Smith, Adrienne Banfield Norris, and guest host Kelly Osbourne during the latest episode of the Facebook Watch series Red Table Talk.Panettiere, 33, discussed an alleged phone call she had with ex Wladimir Klitschko, 46, about their seven-year-old daughter Kaya. “I also remember her dad calling me and he said, ‘Kaya is going around and asking other women if she can call them Mommy,’” she explained. “And my breath...
CELEBRITIES・2 DAYS AGO
RadarOnline

Billy Ray Cyrus may soon be heading down the aisle again as he is reportedly engaged to much younger singer Firerose months after his estranged wife, Leticia "Tish" Cyrus (née Finley), filed for divorce, RadarOnline.com has learned. The Australian-born performer was spotted wearing a massive diamond ring, fueling rumors...
RELATIONSHIPS・22 HOURS AGO
Marie Claire

Every few months, a royal book crashes onto the scene that reveals some of the juiciest behind-the-scenes drama in the House of Windsor. This time around, it's royal reporter Valentine Low who's making waves, with his upcoming opus Courtiers: The Inside Story of the Palace Power Struggles from the Royal Correspondent who Revealed the Bullying Allegations (opens in new tab), which takes a closer look at Prince Harry and Meghan Markle's relationship with their staff while they were working royals.
CELEBRITIES・4 DAYS AGO
msn.com

The Prince of Wales has said that “no parent should ever have to endure” what Molly Russell’s family have been through following the conclusion of her inquest. Coroner Andrew Walker concluded Molly had died while suffering depression and the negative effects of online content. In a message of condolence to Molly’s family, Prince William said: “No parent should ever have to endure what Ian Russell and his family have been through. “They have been so incredibly brave. Online safety for our children and young people needs to be a prerequisite, not an afterthought.”Molly took her own life in 2017 after looking at content related to suicide, depression and anxiety online. Coroner Walker said that the images she viewed “shouldn’t have been available for a child to see.”More to follow... Read More Prince and Princess of Wales visit nation for first time as royals return to dutyOnline Safety Bill amendment to be brought forward after Molly Russell inquest‘Global first’ ruling that online content contributed to Molly Russell’s death
CELEBRITIES・36 MINUTES AGO
The Independent

Miles Teller shared that he “felt the vibe” with the Prince of Wales during the Top Gun: Maverick premiere in London.On Wednesday, Teller appeared on The Tonight Show Starring Jimmy Fallon where he spoke about meeting the Prince and Princess of Wales at the film’s UK premiere in May. However, the actor said he messed up “right off the bat” when it came to following royal protocol.“They give you a full kind of rules, like do’s and don’ts,” he told Fallon. “There’s a lot of etiquette, which, deservingly so. I kind of had a sheet to prep to make...
CELEBRITIES・2 HOURS AGO
The Independent

A famous Indian YouTuber died in a road accident on Monday.Abhiyuday Mishra, who also ran a YouTube channel named Skylord, was killed in the central Indian state of Madhya Pradesh after a truck rammed into his motorbike.Known for creating gaming videos on his YouTube channel, he used to upload clips of his gameplay of Garena Free Fire, a multiplayer battle mobile game, similar to PubG. He has over 424,000 followers on Instagram and 1.64 million subscribers on YouTube.Mishra was on a bike trip with a group that was promoting tourism, reportedly sponsored by the Madhya Pradesh government. The tour began...
ACCIDENTS・6 HOURS AGO
BuzzFeed

16 Screenshots Of People Who Borrowed Someone's Login Info, Then Got Way Too Comfortable On Their Account

Be careful who you lend passwords to.
INTERNET・2 MINUTES AGO

Netflix's new series about serial killer Jeffrey Dahmer is being described by viewers as harrowing, and Evan Peters talked about how he was "very scared" to take on the role.
TV & VIDEOS・2 MINUTES AGO
The Independent

This week on Millennial Love, we talk to actor, writer, and comedian Jack Barry about the darker side of the comedy circuit, which he says is “ripe for abuse” for female comics.“I know that there are several Whatsapp groups amongst female comedians discussing who not to find yourself alone in a room with,” Jack reveals, blaming a late-night, boozy culture for fuelling harassment and abuse in the industry.Check out Millennial Love on all major podcast platforms and Independent TV, and keep up to date @Millennial_Love on Instagram and TikTok.
CELEBRITIES・1 HOUR AGO
UPI News

K-pop stars Mamamoo released a teaser for their EP "Mic On," which will feature the new single "Illella."
CELEBRITIES・17 MINUTES AGO
Daily Mail

Stuart Pearce has encouraged the Premier League to take high-profile games overseas after suggesting the North London derby could be the perfect fit for a match abroad. In similar fashion to the NFL bringing games to London, the Premier League has long been viewed as an asset that could be moved to different countries, with America seen as a potential location.
PREMIER LEAGUE・17 MINUTES AGO
The Independent

Kesha has revealed that her recent performance at the US Taylor Hawkins tribute concert left her with a haemorrhaged vocal cord. On Tuesday (27 September), the 35-year-old singer joined a handful of musicians in Los Angeles, including Miley Cyrus, Travis Barker, and Dave Grohl, to honour Grohl’s late Foo Fighters bandmate Hawkins, who was found dead in his hotel room in Colombia in March. During Kesha’s performance of David Bowie’s “Hero”, she experienced a wardrobe malfunction on stage.In an Instagram post on Thursday (29 September), the Grammy-winning artist shared a photo commemorating the night, explaining that “in the middle...
LOS ANGELES, CA・2 HOURS AGO
The Independent

Where to watch the London Marathon? Best spectator spots

The iconic London Marathon is back as 50,000 runners make their way through the 26.2 mile route.The famous sights of Cutty Sark and Tower Bridge are among the best spots along the route.Runners will work their way from Greenwich to Tower Bridge when they cross the Thames.And all the training and commitment becomes worth it when the runners arrive in Westminster and eventually turn at Buckingham Palace towards the finish line on the Mall. Here’s all you need to know about the route for this year’s race.When is this year’s race?The 2022 London Marathon takes place on Sunday, 2...
WORLD・1 HOUR AGO
The Independent

London Marathon 2022: Start time, route, odds and everything you need to know

The TCS London Marathon is here with the streets of London set to be filled with spectators to cheer on around 50,000 runners. Sir Mo Farah unfortunately was forced to pull out with a hip injury, but last year’s winner winner Sisay Lemma is back, while Kenenisa Bekele also runs - the Ethipian is the only man in the field to run under 2 hours 2 minutes with Eliud Kipchoge the only man faster in history. Look out for Kenya’s Joyciline Jepkosgei in the elite women’s field, with her battle against Ethipians Yalemzerf Yehualaw and Ashete Bekere likely to...
SPORTS・1 HOUR AGO