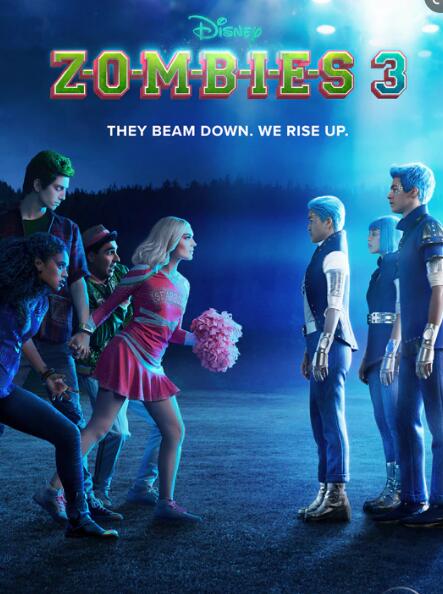 “ZOMBIES 3” stars Milo Manheim as zombie Zed and Meg Donnelly as cheerleader Addison, who are beginning their senior year at Seabrook High in the town that’s become a safe haven for monsters and humans alike. Zed is anticipating an athletic scholarship that will make him the first zombie to attend college, while Addison is gearing up for Seabrook’s first international cheer-off. Then suddenly, extraterrestrial beings arrive in Seabrook, provoking something other than friendly competition.

The third installment in the super popular ZOMBIES franchise will premiere exclusively on Disney+ on July 15 th .

WARNING: THE FOLLOWING VIDEO CONTAINS GRAPHIC VIOLENCE THAT MAY BE DISTURBING TO VIEWERS. VIEWER DISCRETION IS ADVISED. MEMPHIS, Tenn. (AP) — Video showing five Memphis officers beating a Black man was made public Friday, one day after they were charged with murder in the death of Tyre Nichols. The footage shows Nichols being held down, […]
MEMPHIS, TN・1 DAY AGO
PIX11

CYPRESS HILLS, Brooklyn (PIX11) — A Brooklyn man allegedly lit a woman on fire, killing her, a criminal complaint revealed.  Lashawn Duffie, 28, was arrested Tuesday in the Nov. 11, 2022, death of Sugerys Ramirez. The 40-year-old woman’s body was found in a Van Siclen Avenue home near Fulton Place after a fire.  Authorities didn’t […]
BROOKLYN, NY・2 DAYS AGO
PIX11

THE BRONX (PIX11) — A 17-year-old mom and her two babies were reported missing in the Bronx on Thursday, police said. Rihanna Joyner and her 2-month-old baby boys, Anais and Versaille Swinson, were last seen leaving their Howe Avenue home in Castle Hill at around 11:45 p.m., police said. Joyner is about 5 feet, 6 […]
BRONX, NY・15 HOURS AGO
Outsider.com

In Pamela Anderson’s upcoming memoir, Love, Pamela, she claims that Tim Allen flashed her on the set of Home Improvement. Allen says that the incident never happened. However, that didn’t stop some from looking back on the hit 90s sitcom with a critical eye. Before long, a clip resurfaced in which Allen appeared to flash his on-screen wife played by Patricia Richardson.
1 DAY AGO
INSIDE News

Jennifer Lopez and Marc Anthony have maintained a good friendship since they separated, and they do this for the well-being of the children they have in common. In addition, the ex-partner has always decided to support each other in any circumstance.
19 HOURS AGO
PIX11

NEW DORP, Staten Island (PIX11) — An alleged drunk driver has been charged with manslaughter after a woman died when she was ejected from a car that crashed into a utility pole on Staten Island Saturday morning, police said. Adem Nikeziq, 30, was allegedly impaired when he was driving his white Dodge sedan southbound on […]
STATEN ISLAND, NY・18 HOURS AGO
PIX11

STAPLETON, Staten Island (PIX11) — A Staten Island man allegedly stabbed his ex-lover while she was trying to get into her car on Wednesday, police said. The suspect slashed the woman, 33, in the abdomen with a knife as she opened her car door near Broad and Warren streets just after 12:30 a.m., according to […]
STATEN ISLAND, NY・16 HOURS AGO
PIX11

Update, Jan. 27: Diana Mendez-Gonzalez safely returned home on her own on Thursday, police said in an update on their Facebook page Friday morning. Original story: OLD BRIDGE, N.J. (PIX11) — A missing woman was last seen leaving her house in Parlin, New Jersey, around 10:30 a.m. on Wednesday, according to police. Diana Mendez-Gonzalez, 21, […]
CHICAGO, IL・2 DAYS AGO
PIX11

WARNING: THE FOLLOWING VIDEO CONTAINS GRAPHIC VIOLENCE THAT MAY BE DISTURBING TO VIEWERS. VIEWER DISCRETION IS ADVISED.  NEW YORK (PIX11) — Mayor Eric Adams, a former cop, feels betrayed by the Memphis police officers charged with beating Tyre Nichols to death, according to a video statement the mayor released on Saturday. “As a human being, […]
MEMPHIS, TN・19 HOURS AGO
PIX11

Group tries to steal microwave from dollar store in the Bronx: NYPD

Correction: A previous version of this story misstated that the group stole a microwave. The story has been updated to reflect that the suspects attempted to steal the microwave. THE BRONX (PIX11) — A group of people tried to steal a microwave from a dollar store in the Bronx and assaulted a security guard during […]
BRONX, NY・3 DAYS AGO
PIX11

Nafessa Williams brings her bright spirit to ‘Whitney Houston: I Wanna Dance with Somebody’ film

NEW YORK (PIX11) Nafessa Williams brings dimension to the role of Robyn Crawford in the biopic ‘Whitney Houston: I Wanna Dance with Somebody.’ Williams did her research and put watching every Crawford interview she could find. Nafessa is best known for the role of ‘Thunder’ in the hit CW super hero series ‘Black Lightning.’ ‘Whitney […]
NEW YORK STATE・1 DAY AGO
PIX11

MALVERNE, N.Y. (PIX11) — For more than a century, a street in Malverne was named after a Grand Titan of the Ku Klux Klan. That changed on Thursday after years of efforts to get it done. Civil rights leaders and residents alike applauded the change, but they also said that it may not have happened […]
MALVERNE, NY・2 DAYS AGO
PIX11

UNIVERSITY HEIGHTS, the Bronx (PIX11) — The NYPD on Thursday released new surveillance images of a person wanted in connection to a November hit-and-run in University Heights that left an officer hospitalized. Uniformed officers in an unmarked car were on patrol near Loring Place North and West Fordham Road around 10:40 p.m. on Nov. 22 […]
BRONX, NY・3 DAYS AGO
PIX11

NEW YORK (PIX11) — Protests are expected in the New York City region in response to the release of video showing Tyre Nichols’ beating by five police officers in Memphis. Communities are preparing for its impact, with a wide array of people from New York’s governor and New York City’s mayor, to clergy leaders and […]
NEW YORK CITY, NY・1 DAY AGO
PIX11

WASHINGTON HEIGHTS, Manhattan (PIX11) — More than a dozen people are under arrest after federal agents and NYPD officers swooped in en masse at at least 12 locations on either side of the Hudson on Wednesday. Their targets were Trinitarios gang members who have carried out illegal drug and weapons activities that have made neighborhoods […]
NEW YORK CITY, NY・3 DAYS AGO
PIX11

WEST CALDWELL, N.J. (PIX11) – A Newark man is suspected of driving a school bus under the influence and crashing it into a house in West Caldwell Friday morning, according to police. Anthony Stuckey, 37, was arrested and is facing a slew of charges, including suspicion of DWI and 15 counts of endangering the welfare […]
WEST CALDWELL, NJ・1 DAY AGO
PIX11

Tyre Nichols remembered as beautiful soul with creative eye: ‘Everyone loved him’

Growing up in Sacramento, Nichols spent much of his time at a skate park on the outskirts of the city. There, he met a youth pastor and his wife from a local church. They found Nichols energetic and fun-spirited, with a quick wit to make everyone laugh.
MEMPHIS, TN・1 DAY AGO
PIX11

HOMECREST, Brooklyn (PIX11) — Police have charged a man who tried to kidnap a 9-year-old boy from a Brooklyn synagogue on Wednesday, officials said. Yossi Mayer, 42, was charged with kidnapping and endangering the welfare of a child, police said. Mayer allegedly attempted to snatch the boy from a synagogue at 1848 East Seventh St. […]
BROOKLYN, NY・3 DAYS AGO