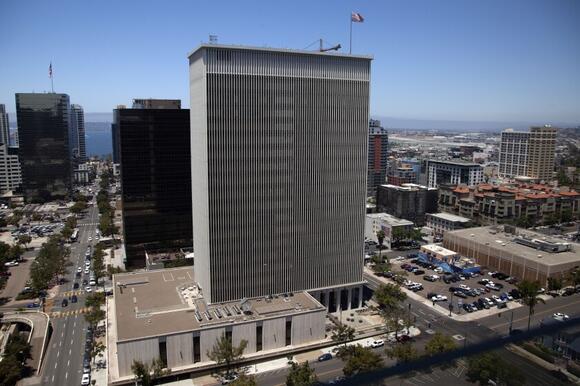 Gloria is the mayor of San Diego. He lives in Downtown.

In our efforts to resolve the disputes over 101 Ash Street and Civic Center Plaza, my fellow city leaders and I have had to accept an unfortunate truth: There is no ideal outcome to this situation. But we also recognize it’s our responsibility to address it in the best interest of San Diego taxpayers, and that’s what the proposed settlement under consideration does.

It was always clear to me and others at City Hall that the winning political move in this debacle would be to continue the litigation over the disputed leases until the bitter end — which almost certainly would be after everyone currently elected to lead our city is long gone. Those of us in charge today would get to claim the “righteous fighter” mantle while liability mounted, and whatever happened at the end of litigation — win or lose — would be someone else’s problem.

I don’t believe San Diegans elected me or their council members to pass the buck. You elected us to solve problems. And having been stuck cleaning up messes created by those who put politics above prudent governing, I’m not about to burden my successor with what would unquestionably be a mess — even if we prevailed after the expected five to eight years of litigation.

That’s because even the best outcome of trial — voiding the leases on both buildings — would mean the city is still responsible for remediating the shoddy construction work at 101 Ash Street that disturbed asbestos and made the building uninhabitable. Imagine paying tens of millions of dollars to fix a building, only to hand back the keys to the owner. Voiding the leases would also require the city to vacate Civic Center Plaza, requiring that we find space for the 800 employees who currently occupy the building. To spend millions on attorneys’ fees chasing that “victory” makes little sense.

Of course, prevailing in litigation is hardly certain, and a loss would be devastating. Should the city lose in court, we’d remain stuck in a business relationship with Cisterra Development, owe millions in back rent — and we’d still need to fix the 101 Ash Street building. Plus, we’d have to pay the owners’ legal costs, which are already in the millions and mounting.

These are the options we’re faced with, and none of them is great. That’s why we negotiated for over a year toward a resolution that provides certainty on costs, protects taxpayers from the intolerable risks of ongoing litigation, and that has long-term potential to deliver benefits to the city through the opportunity to redevelop nearly six blocks in Downtown.

Our Downtown real estate assets are not serving the people of this city well. Our Civic Center is a disaster, with hundreds of millions of dollars of deferred maintenance and substandard space for hundreds of our Downtown workers and the public who engage with them in our buildings.

It’s long past time we hash out a plan for the Civic Center’s future — one that includes space for the city to do its business, as well as affordable housing and possibly a transit and mobility hub. Without resolving this litigation, we don’t know what land we actually have to work with, which means putting off meaningful planning for five or more years as the cases wind their way through the courts.

I do understand why folks are skeptical about this. The missteps and outright boondoggles of the past have each left a scar on the public’s trust in the city’s decisions. But those of us San Diegans elected to lead on these issues refuse to accept the notion that the city is doomed to mediocrity. We’re here because we committed to doing better by San Diegans. We intend to deliver on that promise.

I’m grateful to the City Council for its rational, thoughtful engagement and guidance throughout the 18-month settlement talks, and I look forward to moving past this debacle with lessons learned and a renewed commitment to proving San Diegans can trust their city government to do hard things and make the city work better for all of us.