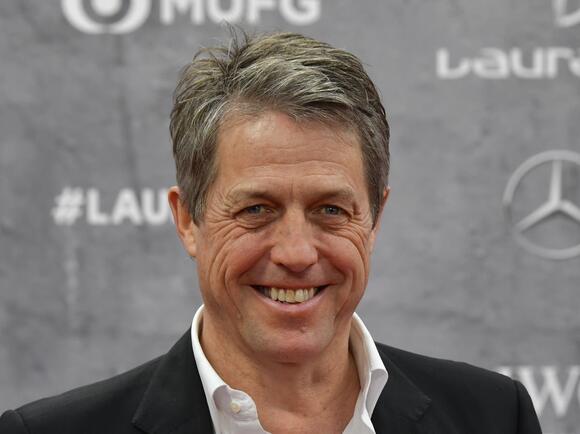 The actor took to social media to express his discontent with Patel – who has held the role of Home Secretary since 2019 – posting an photograph of long queues at Heathrow Airport immigration, which he branded “a disgrace and inhumane”.

When asked for more detail with regards to the photo, Grant responded: “It’s a queue for immigration control. Which is staffed and run by the Home Office. We’re not allowed to call Brexiteers thick but it’s a struggle sometimes.”

Grant has long been critical of the current UK government. Earlier this month it was revealed that Grant was the reason the Benny Hill theme music was played over a broadcast about Boris Johnson’s resignation, after he tweeted a message to political activist Steve Bray, who is known for his musical protests outside the House of Commons in Westminster.

In January, the actor hit out at the government over plans to scrap the licence fee that funds the BBC, calling politicians “spittle-flecked nut jobs” who “want to destroy” the corporation.

Then, in February, he showed his support for an anti-Boris Johnson march taking place in London and in May mocked MPs support for Johnson amid Sue Gray report fallout.

Last year, Grant had accused the government of using the Covid-19 pandemic as an opportunity to “enrich” its friends and donors.

Cleverly and Sefcovic to talk amid row over Northern Ireland Protocol

The Foreign Secretary will hold his first call later with Maros Sefcovic, amid an ongoing row over post-Brexit arrangements in Northern Ireland.The European Commission vice president, who has led talks between the EU and the UK over the Northern Ireland Protocol, is expected to speak with James Cleverly around lunchtime.Relations between London and Brussels remain at a low ebb, after the Government angered the EU with plans to rip up swathes of the protocol in a bid to address the concerns of unionists in Northern Ireland.The protocol, signed by former prime minister Boris Johnson’s government, effectively keeps Northern Ireland aligned...
POLITICS・1 HOUR AGO
The Independent

The Prime Minister and Chancellor have lost the faith of the markets and the public and will never get it back, says Labour. Ahead of Liz Truss’s meeting with the Office for Budget Responsibility (OBR) – Britain’s independent fiscal watchdog, shadow business secretary Jonathan Reynolds told Sky News: “It’s a bit late for that now, isn’t it?”He added: “I cannot stress how angry people should be at this Government for what is without question one of the biggest unforced errors in policy-making in this country’s history.”Mr Reynolds claimed that people and businesses are looking at the “entire approach” of...
ECONOMY・29 MINUTES AGO
The Independent

David Dimbleby delivered a rare expletive on-air as he discussed the UK’s economic turmoil with the BBC.During Thursday’s (29 September) episode of the BBC’s Newscast podcast, host Adam Fleming told Dimbleby: “I should make clear, you don’t work for the BBC, you can speak really freely.”“It just seems extraordinary and I mean, it is a complete s***storm for people who are actually trying to sell abroad or back here,” the former Question Time host said.His language caused Fleming to exclaim “you’ve definitely left the BBC haven’t you” while co-host Jo Coburn reassured listeners it was after the 9pm UK...
INCOME TAX・2 HOURS AGO
Cheryl E Preston

Prince Harry and Meghan MarkleTown and Country screenshot. Prince Harry and Meghan Markle have been blamed for a lot of issues related to the royal family and a new book is accusing the Duke and Duchess of Sussex of something quite interesting. Royal correspondent and author Katie Nicholl is causing quite a stir with "The New Royals: Queen Elizabeth's Legacy and The Future of the Crown," Nicholls insists that "Megxit," caused more harm than anyone realized and that Harry and Meghan leaving the Uk for the US has placed "an unfair burden on the Prince and Princess of Wales' three young children"..
1 DAY AGO

Britain’s youngest female murderer who stabbed a stranger to death and was only caught after bragging about it is seeking to be released from prison after 25 years.Sharon Carr was just 12 years old when she knifed 18-year-old Katie Rackliff more than 30 times in an unprovoked attack in June 1992.The killer, dubbed the Devil’s Daughter, had picked the teenage hairdresser out at random as she walked home from a nightclub in Surrey.The murder went unsolved for two years until Carr attacked a girl with a knife at school in Camberley, Surrey, in June 1994, and tried to strangle two...
PUBLIC SAFETY・2 DAYS AGO
The Independent

A guest at Queen Elizabeth II’s funeral has revealed the sweet gesture that Prince Harry did to wife Meghan Markle in order to make her feel more “comfortable” during the service. On Monday 19 September, thousands of mourners and members of the royal family attended the State’s...
CELEBRITIES・10 DAYS AGO
The Independent

Richard Bacon highlighted the “damage” Liz Truss has done to Britain in the space of a week as he appeared on the BBC Question Time panel on Thursday.“I think Liz Truss has done more damage to the British economy than Brexit, the war in Ukraine, or the pandemic. And she’s done it since Friday,” the TV presenter said to applause.On the same episode, a first-time buyer sparked gasps from the audience by claiming her mortgage offer has jumped from 4.5 per cent to 10.5 per cent since last Friday.Click here to sign up for our newsletters.
CELEBRITIES・59 MINUTES AGO
The Independent

Mike Tindall has claimed the Queen approved a plane, that repatriated the bodies of British soldiers, to transport her coffin with the words: “If it’s good enough for my boys, it’s good enough for me.”The former England rugby star, who is married to the late Queen’s granddaughter Zara Tindall, described how the aircraft, due to fly the Queen from Edinburgh to London after her death, was substituted for a larger RAF aircraft to enable a more “dignified” ceremony.Mr Tindall said he could not verify the story, sent to him by an “ex-army friend”, and it appears the claims have been...
U.K.・1 DAY AGO

Vladimir Putin is set to formally announce the annexation of four regions in Ukraine as Western leaders insist they will refuse to consider them part of Russian territory. He is expected to declare Russia has absorbed areas of eastern and southern Ukraine on Friday following referendums considered a sham by Kyiv and beyond. Russia’s president is due to deliver a major speech and host a grand ceremony in Moscow for the annexation of the Russian-controlled areas of Donetsk, Luhansk, Kherson and Zaporizhzhia.A Kremlin spokesperson said the pro-Russian administrators from the four regions would sign treaties to join Russia in...
POLITICS・52 MINUTES AGO
The Independent

The Queen’s cause of death was old age, her death certificate has revealed.The document, published by National Records of Scotland, records that the late monarch died at 3.10pm on 8 September at Balmoral Castle in Ballater.The cause of death of Britain’s longest-reigning sovereign is listed as old age.In a day of pageantry and processions, the Queen was laid to rest on Monday 19 September following her 70 years of service and a state funeral at Westminster Abbey, attended by hundreds of world leaders and dignitaries.As the Princess Royal paid tribute to her mother, she revealed she was with her...
CELEBRITIES・2 HOURS AGO
The Independent

Two major British museums are opening their collections to Cambodian archaeologists for inspection following allegations that valuable artefacts were illegally brought to England.The Cambodian government in May this year demanded the right to inspect the museums to recover antiquities that it says were stolen from the country’s temples during years of conflict under the Khmer Rouge regime.The British Museum, a month later, granted permission for a specialist team to inspect and identify the potentially stolen objects, the Cambodian government said. The museum houses nearly 100 pieces from the southeast Asian country.The Victoria & Albert Museum also joined the UK’s...
WORLD・1 HOUR AGO
The Independent

Liz Truss has been accused of “repeatedly misleading” the public by claiming no one will pay energy bills above £2,500.During her morning broadcast round, the prime minister told BBC Radio Kent the government had stepped in to ensure “nobody is paying fuel bills of more than £2,500”.She later repeated the claim to BBC Radio Leeds, telling the programme: “The action we've taken on energy bills will mean that Leeds and other people in West Yorkshire aren't going to be facing energy bills of £6,000 which is what was forecast, they're going to be, through the energy price guarantee, the...
ENERGY INDUSTRY・1 HOUR AGO

The cost of living crisis is forcing healthcare workers to walk away from the NHS in pursuit of better-paid jobs, trust leaders have warned.As energy, food and transport costs rise, staff are skipping meals to feed their children or taking on second jobs, with some also struggling to make the journey to work, according to a new survey of NHS trusts in England.Health workers are turning to the hospitality or retail sectors, placing further strain on an already overburdened NHS, leaders say. Two-thirds of surveyed trusts “report a significant or severe impact from staff leaving”, with services struggling to respond...
HEALTH・51 MINUTES AGO
The Independent

Royal Mail: Why are postal workers going on strike?

Royal Mail workers are staging a two-day strike on Friday (30 September) and Saturday (1 October) over a long-running dispute over pay and working conditions.Earlier this week, the Communication Workers Union (CWU) announced that its members would go on strike for 19 days across October and November.The industrial action, which follows four days of strikes in August and early September, will have a “dramatic impact” on peak mail periods such as Black Friday, Cyber Monday and the run-up towards Christmas.In a national strike ballot over pay, 97.6 per cent of CWU members who work for Royal Mail voted to...
WORLD・1 HOUR AGO
The Independent

This all started when I came across the work of Algernon Newton, who painted wonderful pictures of London houses and English landscapes. Even by 1943, when Enid Blyton published the first of the Five Find-Outers books, the name Algernon had become a comic archaism (as in Frederick Algernon Trotteville). Anyway, this set me off on a voyage of discovery, and I ended up with two top 10s, of extinct girls’ and boys’ names. The boys’ list will come next week.I used the Office for National Statistics dataset of babies’ first names in England and Wales, 1996-2020, and the Scottish records...
RELATIONSHIPS・45 MINUTES AGO
The Independent

Malawi-born artist Samson Kambalu has unveiled his new sculpture on the Fourth Plinth in London’s Trafalgar Square.Antelope depicts a 1914 photograph of European missionary John Chorley and Malawian Baptist preacher John Chilembwe, who fought against colonial rule, representing “standing up for justice and equality.”The artist told the Press Association that he was “glad” he could carry forth Chilembwe’s message.“His [Chilembwe’s] act of protest is still relevant today, and I’m glad that I can carry it forward,” Mr Kambalu said.Sign up to our newsletters. Read More Clashes between protesters and police outside Iranian embassy in LondonMet Police commissioner 'happy' for daughters to walk in London at nightAston Martin stunt car from No Time To Die expected to fetch up to £2m at auction
VISUAL ART・2 HOURS AGO