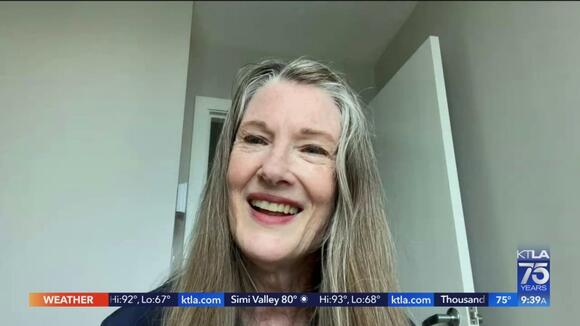 We know Annette O’Toole as the woman sticking her nose in everyone’s business in Netflix’s “Virgin River,” but we actually got to know her mom during the pandemic.

A year ago O’Toole’s mother, Dorothy Geraldine Niland, fell and broke her hip. The now 96-year-old ended up teaching her physical therapist how to tap dance. Niland is a known dance instructor.

The tap-dancing duo ended up becoming great friends and KTLA’s Lynette Romero featured them in her segment Link up with Lynette.

When it comes to the dancing gene, O’Toole definitely inherited it as well.

“I was tap dancing at three. You can’t escape it in our family,” she explained. “We all tap.”

Things haven’t been slowing down for O’Toole either.

Her role as Hope McCrea in Netflix’s “Virgin River” has opened her up to a newer and larger fanbase.

“It’s very exciting, the people are amazing,” the actress exclaimed. “Everywhere I go, if I happen to have my mask off which is rare, I get recognized all over the place and it’s not just a certain group of people. Young people really like the show and older people certainly. It kind of runs the gamut. It became this interesting monster, this show.”

The 70-year-old is proud to play a role that steers away from the stereotype actresses of a certain age tend to play.

“It’s turned into this really exciting new way of looking at, I think, older women in film. Her life is not one thing. It’s not just her grandchildren, she doesn’t even have children,” she explained. “It shows you life for her character, and life for me- I didn’t expect to be at this age still being able to do all this work and it’s more fun than it’s ever been for me.”

The series is currently filming Season 5 in British Columbia, Canada.

A baby girl, her parents and uncle were found dead in a central California orchard two days after they were kidnapped at gunpoint from their business, police said. “Our worst fears have been confirmed,” Merced County Sheriff Vern Warnke said at a Wednesday night news conference. Warnke said the victims were close to each other […]
MERCED COUNTY, CA・1 DAY AGO
KTLA

An attorney representing the family of a Los Angeles police officer who died during a training earlier this year alleges that the victim was targeted and killed because he was investigating fellow officers. “We have uncovered evidence that Houston Tipping may have been harmed and later died as the result of retaliation against as a […]
LOS ANGELES, CA・2 DAYS AGO
KTLA

2 inmates die after being attacked in California prison yards

Two inmates serving life sentences have died after being attacked at California prisons, corrections officials said Wednesday. Robert Tunstall, 64, died Wednesday morning after another inmate attacked him in the recreation yard at Salinas Valley State Prison, according to a statement from the state Department of Corrections and Rehabilitation. Life-saving measures failed and Tunstall was […]
16 HOURS AGO
KTLA

More than 23 million California residents are expected to receive a Middle Class Tax Refund in their bank accounts or by mail starting this week.
CALIFORNIA STATE・1 DAY AGO

Las Vegas police are investigating the stabbing of eight people on the Las Vegas Strip Thursday. Police said the suspect used a large kitchen knife and was taken into custody.
LAS VEGAS, NV・9 HOURS AGO
KTLA

The man suspected of kidnapping and killing four family members in central California had previously worked for the family, the Merced County Sheriff said Thursday. The bodies of Jasleen Kaur, 27, Jasdeep Singh, 36, Amandeep Singh, 39, and eight-month-old Aroohi Dheri were discovered in an orchard Wednesday night. All four were kidnapped at the family’s […]
MERCED COUNTY, CA・5 HOURS AGO
KTLA

A homeless woman died when she was run over by a tractor trailer in a parking lot in Los Angeles Tuesday morning. The accident occurred around 12:45 a.m. in the Vons parking lot near the intersection of Montana Street and North Alvarado St. in the Echo Park neighborhood. According to a Los Angeles Police spokesperson, […]
LOS ANGELES, CA・2 DAYS AGO
KTLA

Study ranks the California housing markets that are cooling the most

A driver was killed after their vehicle plunged several hundred feet off a cliffside in Palos Verdes Estates on Tuesday. The car was found near 2100 Paseo Del Mar, according to the Los Angeles County Fire Department. The vehicle lost control and fell about 300 feet off a cliff before crashing on the shoreline. Authorities […]
PALOS VERDES ESTATES, CA・2 DAYS AGO
KTLA

The man's death has been ruled an accident.
MYRTLE BEACH, SC・1 DAY AGO
KTLA

Police: 6 California killings may be work of serial killer

Ballistics tests have linked the fatal shootings of six men and the wounding of one woman in California – all potentially at the hands of a serial killer – in crimes going back more than a year, police said. Authorities last week announced that five men in Stockton had been slain in recent months, ambushed […]
STOCKTON, CA・2 DAYS AGO
KTLA

From the Emmy award-winning reality TV series “Deadliest Catch,” this father-daughter duo is making a splash in their return with their spinoff show “Deadliest Catch: The Viking Returns.” Captain Sig Hansen and Co-Captain Mandy Hansen are of Norwegian descent, so this spinoff is helping them get back to their roots. In Norway, they turn their […]
TV SERIES・2 DAYS AGO

For the first time in five years, the waitlist for a rental assistance lottery program for low-income Los Angeles residents is opening up. The Section 8 Housing Choice Voucher Program will help up to 30,000 households by paying a portion of their rent paid, according to the Los Angeles Housing Authority. The program provides rental […]
LOS ANGELES, CA・2 DAYS AGO
KTLA

Los Angeles drug authorities have seized a record $33 million dollars worth of narcotics during a massive bust in Norco. Around 3,552 pounds of methamphetamine and 66 kilograms (145 pounds) of cocaine were seized by the Los Angeles Field Division of the U.S. Drug Enforcement Administration (DEA). This marks the largest amount of methamphetamine ever […]
NORCO, CA・1 DAY AGO
KTLA

The Los Angeles Police Department has arrested a man suspected in at least a dozen crimes along Pico Boulevard, and now they are looking for additional victims who have not been contacted yet. On Sept. 2, police arrested 56-year-old Douglas Irvin Kaufman, a homeless man in the Los Angeles area. Kaufman is suspected in several […]
LOS ANGELES, CA・3 DAYS AGO
KTLA

Two men were arrested after being found in an Apple Valley playground with loaded guns over the weekend, police said Tuesday. The incident unfolded just before 4 a.m. Sunday at 14999 Dale Evans Parkway. A witness reported seeing several people arguing, when one of the suspects, 22-year-old Jovan DeLao, brandished a gun and told the […]
APPLE VALLEY, CA・2 DAYS AGO
KTLA

A woman’s body was found partially in a donation box in Santa Clarita Thursday morning, though the circumstances surrounding her death are unknown. The incident was reported just before 10 a.m. near the 24800 block of Orchard Village Road in Newhall, according to the Los Angeles County Sheriff’s Department. The woman, believed to be in her […]
SANTA CLARITA, CA・10 HOURS AGO
KTLA

It's the final day of Southwest Airlines' current winter sale, with fares as low as $29 still available for customers who book before 11:59 p.m. (CT) on Oct. 6.
LIFESTYLE・8 HOURS AGO
KTLA

Man arrested on suspicion of assaulting ex-wife, another man with blunt object in Thousand Oaks

A man suspected of assaulting his ex-wife and another man with a blunt object in Thousand Oaks over the weekend was arrested Tuesday, police said. The incident occurred around 2 a.m. Sunday when Thousand Oaks police responded to a local hospital regarding two people who needed medical attention after being attacked, the Ventura County Sheriff’s […]
THOUSAND OAKS, CA・15 HOURS AGO
KTLA

A 30-year-old man has been arrested and faces possible attempted murder charges for allegedly pulling out a gun and firing it at another person during an early morning fight at a bar in San Bernardino County. It happened around 2 a.m. Monday at Cosmos Tavern at 12409 Mariposa Rd. in Victorville. Deputies from the San […]
APPLE VALLEY, CA・2 DAYS AGO