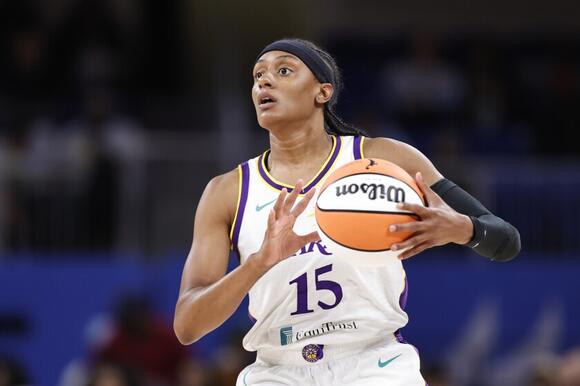 Sparks guard Brittney Sykes and sneakers of all kinds awaited the young adults of the Covenant House California on Monday afternoon for the conclusion of a shoe drive honoring Brittney Griner .

The transitional youth ages 18 to 24 lined up in the shelter's courtyard to chat with Sykes and pick out their favorite kicks donated by the Sparks in partnership with the nonprofit Hav A Sole . Sporting a shirt reading “ We Are BG ,” Sykes listened to their stories and hyped them up as they shopped for shoes collected throughout the WNBA season.

“These are kinda swaggy,” she said to one young woman before convincing her to try on the sneakers.

It’s what Griner used to do in Phoenix for her Heart and Sole Shoe Drive before she was detained by Russian officials in February while traveling during the WNBA offseason to play for UMMC Ekaterinburg, an elite basketball club. At the time of her arrest in a Moscow airport, Russian officials said they found hashish oil in Griner’s luggage.

The seven-time WNBA All-Star pleaded guilty to carrying the substance during a court appearance July 7, but she said she did not bring it into the country with criminal intent and later provided a doctor's letter indicating cannabis was recommended for pain relief. Griner’s next court date is scheduled for next Tuesday. She could face up to 10 years in prison.

Since her arrest, Griner’s loved ones and people from across the sports world have participated in a campaign to bring her home. Griner’s supporters and the basketball star herself have called on the White House to negotiate a deal for her freedom. Griner penned a letter to President Biden this month asking him not to “forget about me and the other American detainees. Please do all you can to bring us home.”

When the Sparks played the Phoenix Mercury in Los Angeles on July 4, the team held a shoe drive in Griner’s honor. She was known for keeping shoes in the trunk of her car to give to those in need and inspired the Mercury to start annual shoe drives.

In giving back to the community, Sykes hopes to keep the conversation about Griner and her generous spirit alive.

“To be able to come here and partner with Hav A Sole and partner with the Covenant House and have the opportunity to meet some really dope kids and just be able to honor the fact that she saw something in Phoenix and she wanted to help a problem, you can do that anywhere,” Sykes said.

The Sparks guard said delivering shoes to those in need was bittersweet because Griner still remains detained. When she thinks about it, Sykes said she feels angry, particularly about the circumstances that led to Griner's detention. Many WNBA players travel overseas during the offseason to supplement their incomes as Griner did this past winter.

One way people can help, Sykes said, is by contacting their elected officials and urging them to push for Griner's release. While some have criticized Griner for breaking local laws, her supporters want people to know who she is off the basketball court.

Sykes said events like the shoe drive give people a glimpse into Griner's character.

“People cannot only know her as a name and as a basketball player, but know her as Brittney Griner, why we love her and why we want her back here so bad,” Sykes said. “ It’s about her giving back to the community, her being a loving friend, her being a goofball, like a bright spirit. Her heart is what draws you to her, so we want her back. … That’s not just a basketball player. She’s a human being, and she’s supposed to be back here with us.”

Shoes made in China? In the sweat shops where they make a dollar an hour.

I'll take a knee on this situation. just like she does during the national anthem

The Celtics employee with whom Ime Udoka had an affair helped make all his travel arrangements ... and that job sometimes included organizing travel for his fiancee, Nia Long. Sources connected to the couple and the NBA franchise tell TMZ ... one of the staffer's duties included planning Udoka's team-related travel, and we're told she was also involved in booking travel for Nia to come to Boston or to road games.
BOSTON, MA・13 HOURS AGO
Yardbarker

Whenever anyone talks about the Phoenix Suns, it is the superstars Devin Booker and Chris Paul who often stand out. But the Suns are much more than just Booker and CP3. Boasting some of the best role players, the Suns are a very balanced side. Among one of the most important role players on the team is Jae Crowder.
PHOENIX, AZ・1 DAY AGO
Los Angeles Times