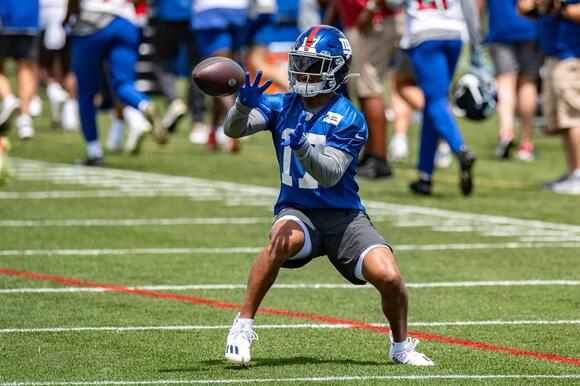 New York Giants camp starts Tuesday for rookies, and finally, all of their rookies are in the fold.

Less than 24 hours before camp opens, the Giants have agreed to terms with second-round pick Wan’Dale Robinson and fourth-round pick Dane Belton, their last two unsigned draft choices, and both are expected to sign their rookie deals and be in camp Tuesday.

Robinson was an interesting pick in the second round given his similar skill set to Kadarius Toney in an already-crowded receiver room, but head coach Brian Daboll praised Robinson during OTAs.

“We throw a lot at him. And he can handle it. He’s smart,” Daboll said. “That was part of the evaluation process, in terms of getting ready for the draft with the position coaches and the coordinators, of really trying to teach these guys as much as we can in that process to see what they can grasp and how smart they are. We place a high premium on intelligent players, and he’s certainly one of them.”

Belton, meanwhile, could be a contributor as soon as Week 1 at the safety position, as the Giants have no one on the current roster behind Xavier McKinney and Julian Love who have taken an NFL snap in the middle of the defensive backfield.

Kenny Golladay made a catch late in the first half that was sarcastically celebrated by Giants fans, but it was immediately negated by an OPI call.
SAN FRANCISCO, CA・14 HOURS AGO
WFAN Sports Radio

In an Instagram post, Cooper Rush’s wife Lauryn trolled the Giants for cutting him after Rush led the Cowboys to victory over Big Blue on Monday.
SAN FRANCISCO, CA・12 HOURS AGO
WFAN Sports Radio

Sterling Shepard’s teammates said they were “choked up” to see the veteran receiver go down with what looks like a serious knee injury at the very end of Monday’s loss.
SAN FRANCISCO, CA・14 HOURS AGO

Shepard went down on the Giants’ final offensive play of Monday’s loss to the Cowboys, clutching his left knee after taking a step and having to be carted off the field.
SAN FRANCISCO, CA・1 DAY AGO
WFAN Sports Radio

Giants tried to trade Kenny Golladay, were willing to take on 'significant chunk' of salary: Report

According to NFL insider Albert Breer, the Giants tried to trade Kenny Golladay before roster cutdowns, and were willing to take on a significant amount of his salary.
SAN FRANCISCO, CA・13 HOURS AGO
WFAN Sports Radio

Cameras caught Williams and defensive line coach having what appeared to be a heated argument after the defense gave up a long touchdown - but Williams downplayed it as ‘just a loud conversation.’
CINCINNATI, OH・2 DAYS AGO
WFAN Sports Radio

Williams was carted off Sunday with his lower left leg in an air cast, but X-rays were negative, and head coach Robert Saleh said he is week to week with a high ankle sprain and the team “dodged a bullet.”
NFL・1 DAY AGO

Williams was hurt making a tackle on Cincinnati’s Chris Evans in the third quarter, and had his left leg in an air cast as he was carted off the field.
NFL・2 DAYS AGO
The Perquimans Weekly

Football has definitely evolved over the years

Evolution cannot be denied. Before anyone gets too emotional, you should know I’m not referencing the Bible, though there will be mention of a man with what many dubbed “the voice of God.” I am certainly no stranger to discussing how the business of sports or the social impact of those who make a living from it have changed. What stands out to me after another weekend of football is...
NFL・15 MINUTES AGO
WFAN Sports Radio

Boomer breaks down all that's wrong with Giants broken offense

After managing just 16 points against the Cowboys, Boomer Esiason breaks down all the issues with the Giants offense, including Daniel Jones’ pocket presence.
SAN FRANCISCO, CA・9 HOURS AGO
WFAN Sports Radio

Jacob deGrom on clunker in Oakland: 'Unacceptable, terrible job by me'

DeGrom allowed four earned runs in the first and five overall in four innings, the first time he’s done either since 2019 - and he called his performance ‘unacceptable’ and a ‘terrible job by me.’
QUEENS, NY・2 DAYS AGO