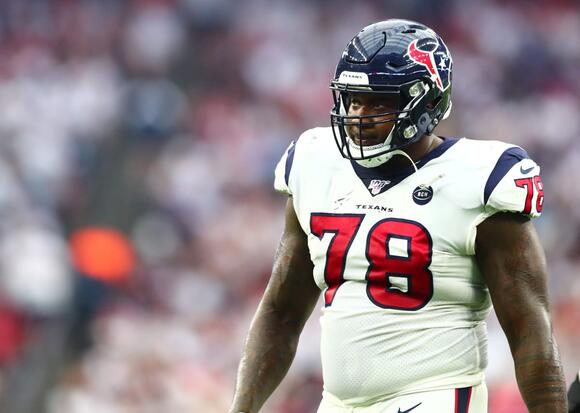 The Houston Texans ' acquisition of offensive tackle Laremy Tunsil might not be the most popular transaction in franchise history, but his talent and impact along the offensive front are undeniable.

Since arriving in Houston, Tunsil has been one of the lone consistent bright spots for the Texans when healthy, making two Pro Bowls in his first two seasons.

However, he was forced to miss most of last season due to an injury, leaving the Texans' offense in shambles.

Now healthy heading into 2022, the soon-to-be 28-year-old will be counted on to pick up where he left off and be a major part of the team's success.

And according to ESPN , the expectations for Tunsil, while not what they might have once been, are still enormously high, ranking him among the top 10 tackles in the NFL for 2022.

Tunsil came in at No. 6 in that poll, ahead of names such as Lane Johnson and Ronny Stanley, and just below Cowboys tackles Tyron Smith.

Tunsil made back-to-back Pro Bowls before missing most of 2021 with a thumb injury. He played in just five games last season and posted an 83.8% pass block win rate, which would have been outside the top 50 had it qualified. But his pass block win rate in the two prior seasons was 90.6%.

"He's maybe not as good as he was, but I give him a pass because of the conditions," an AFC scout said. "That's not a good team. I'd still take him ahead of most."

Tunsil's 76.1% run block win rate since 2019 ranks 16th among tackles. And many evaluators say you can't replace his power and range.

"He's still a high-level athlete to me," an AFC executive said. "Plays with violence."

The good news for Tunsil? He will have a much-improved cast around him .

Whether it is additional help next to him along the offensive front, added weapons for Davis Mills, or a retooled defense on the other end of the field, Tunsil is no longer on his own.

And just one year out from being in a contract year in 2023, he should be able to use this opportunity to shine.

Texans vs. Chargers Week 4: How to Watch, Betting Odds

The Houston Texans host the L.A. Chargers at NRG Stadium for a Sunday matchup against two teams still hoping to get back on track in 2022.
HOUSTON, TX・13 HOURS AGO
TexansDaily

Is there a silver lining to the Houston Texans losing three winnable games to start the season? Lovie Smith thinks so.
HOUSTON, TX・2 DAYS AGO
TexansDaily

Texans WR Brandin Cooks: 'We've Got Some Things to Clean Up'

Some honest comments from the Houston Texans receiver as his offense looks to get better.
HOUSTON, TX・11 HOURS AGO
TexansDaily

Mills opened up about the advice Hamilton offered him to overcome his early season struggles.
HOUSTON, TX・1 DAY AGO
TexansDaily

How significant is the transfer portal in college foortball? On the opening week of the season, 48% of the starting quarterbacks were transfers. Are you kidding me? That statistic says everything that is wrong with the rule, which was changed to allow college players to transfer and immediately be eligible to play for...
NFL・8 MINUTES AGO