For Jung, Graham and Tigers, it feels meant to be 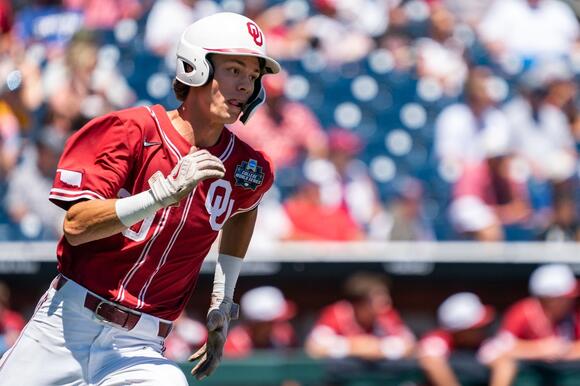 Even after a great meeting with several key decision-makers for the Tigers a couple weeks ago -- "About the whole organization," quipped GM Al Avila -- Jace Jung said he "had no idea they were going to draft me." His teacher in 10th grade knew it all along.

"He told me every day I’d walk into his class that I was going to be a Detroit Tiger, get drafted by the Detroit Tigers. And I was like 'Oh, yeah, whatever,'" Jung said with a laugh shortly after the Tigers drafted him 12th overall Sunday night. "But he’d say it to me every day. He was a huge Detroit Tigers fan. I called him right after the draft and he was screaming. It was awesome."

That teacher is Frank Filipone, from MacArthur High School in Jung's hometown of San Antonio. He knew what he was talking about. Jung was far from being drafted back then -- and still has a ways to go to reach Detroit -- but he thrust himself onto the MLB radar by winning Big 12 Player of the Year his sophomore season at Texas Tech. And cemented his status as a first-round talent by hitting .335 with a 1.093 OPS -- and more walks than strikeouts -- as a junior.

The Tigers got themselves a much-needed left-handed power bat that can move quickly through the system. Jung was ranked by Baseball America as the No. 5 college hitter in the draft.

The 21-year-old said he called his parents and his advisor following his pre-draft meeting with the Tigers and told them, "Man, I just had one of the best meetings I’ve ever had, with the Detroit Tigers.' And it just so happened that I fell in their lap."

"We were a little bit worried that he would go before us," said Tigers director of amateur scouting Scott Pleis. "So we were super happy when he got to us. He's a guy that we’ve been talking about for a long time. It just so happened that we got lucky."

Jung was watching the draft from Texas Tech, where he's still on campus "just hitting and working out." When he got word that he was going to the Tigers, that Mr. Filipone had called it, he smiled and said "if there was a wall in front of me, I probably would have run through it." This is generally how Jung plays the game. He called himself a "spark-plug who likes to get rallies going."

"I like to compete nonstop, I like to be a vocal leader on the field and I like to just get after it pitch to pitch," he said. "I’m intense. I just love having fun and I love winning."

Pleis said that on top of Jung's obvious traits, like his left-handed power, the Tigers were drawn to his "emotion and competitiveness on the field and how he wants to win, which is huge.

"You'll see that as you watch him play. He's a gritty guy, his teammates love him, just a lot of good traits to be a championship ballplayer," said Pleis.

The Tigers drafted another player who fits that profile in the second round, shortstop Peyton Graham from the University of Oklahoma. Graham and Jung could be Detroit's double-play tandem of the future. They already spent one summer playing together for the Santa Barbara Foresters in the California Collegiate League, when they also happened to be roommates. Jung said they were "the two most competitive people in the household, always trying to battle each other, and we came together as brothers." It all feels meant to be.

"We did a lot of things together, we loved having fun together and we always kept in touch over the years. So I think we’re going to enjoy this one," Jung said with a big smile. "I just texted him and said, 'What up, teammate!'"

The 21-year-old Graham is a wiry 6'3, but Pleis said he packs "freaky power" in his right-handed swing. He was a finalist for the Brooks Wallace Award for the top shortstop in the nation this year after becoming the first Oklahoma player ever with 20 homers and 30 steals in the same season. Naturally, he was also ranked by Baseball America as the draft's second-best college athlete.

Jung and Graham immediately become two of the most advanced position player prospects for the Tigers, whose rebuild still aches for impact bats. They may have found two at the top of this year's draft, in a pair of former teammates who are teammates yet again.

Lions continue to be haunted by second-round picks

First- and second-round picks are lifelines for bad teams. The Lions have done fairly well with the former, but not well enough to basically whiff on the later.
DETROIT, MI・1 HOUR AGO
Inside The Celtics

With the Celtics' signing of Blake Griffin now official, Monday represented the first opportunity for the media to speak with him since Friday's news that he was taking his talents to Boston. When asked what factored into his decision, Griffin shared the following. "Beyond the history that this ...
BOSTON, MA・27 MINUTES AGO
97.1 The Ticket

The defense was supposed to be better this year after giving up the second most points and fourth most yards in the NFL. It has somehow been worse.
DETROIT, MI・19 HOURS AGO
97.1 The Ticket

The Lions have allowed the most yards and the most points in the NFL through four games, which is why they are 1-3 despite an explosive offense.
DETROIT, MI・17 HOURS AGO