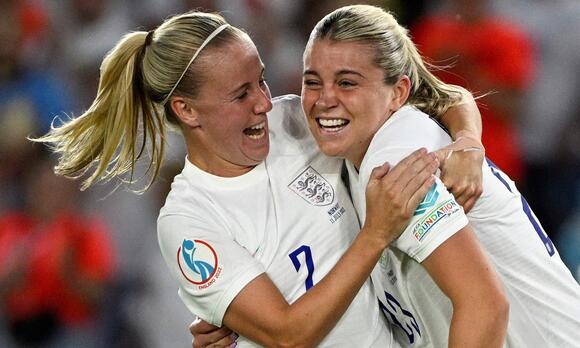 England’s momentum is growing and they will not be worried about facing Spain in the Euro 2022 quarter-finals on Wednesday. They have played them before and know what it takes to get the better of one of the best sides in Europe.

At Euro 2017 I was in the England squad that beat Spain 2-0 despite having only 22% possession during the match. England will be happy to let Spain have the ball as long as they themselves are organised and disciplined, which they have shown to be thus far. Sarina Wiegman’s side have dominated possession in the group stage but they might need to be at their best without the ball on Wednesday. England will play top nations in the latter part of the tournament and will be embracing the challenge.

Spain are without Alexia Putellas and any team in the world that would miss a player of her quality. You do not win the Ballon d’Or for nothing. The tournament is the lesser for her absence after she was cruelly sidelined with an ACL injury just hours before the first game. She scored 11 goals in the Champions League and another 18 in the domestic league for Barcelona last season. She is the person who can make a difference in a major tournament. The experienced forward Jennifer Hermoso is also out, leaving gaps to be filled in the spine of the team.

Spain hit four against Finland but struggled in front of goal in the loss to Germany and only scored late on against Denmark with the opponents chasing the game in their final group match. They are not as clinical as they would like given their possession stats; they are the best team between the two 18-yard boxes thanks to their style, buildup play, ability to receive the ball under pressure and how they can dribble through in central areas but they are lacking something in the opposition box. England are yet to concede a goal in the Euros and have rarely looked like doing so since Wiegman took over as head coach, making the prospect even more daunting for Spain’s attackers.

Putellas’s Barcelona teammates Mariona Caldentey and Aitana Bonmatí are two of the players putting in the extra yards to try to make up for her absence. Caldentey is best when cutting in from the left and has shown she is good at drifting into any space left between the full-back and central defender. She would have two goals to her name in the tournament already if it was not for a couple of world-class saves.

Apart from the penalty against Finland, which was won by a wide player, all of Spain’s goals have come from crosses, whether set pieces or from open play. It is a surprising revelation because I have watched Spain for a long time and you can see their style is similar to that of Barcelona in how they like to control possession and open teams up. The tournament overall has more headed goals than ever before, so it is a common theme. Spain are incredibly dangerous in wide areas and have the players to provide the delivery demanded by those in the box.

With the amount of possession they have they try to stretch the opposition and work their way through. I remember Barcelona men’s coach, Xavi Hernández, discussing the importance of the third player run and this team has a lot of that, whether it is Bonmatí or Caldentay, they all try to play that role by spotting the gaps in defence. England, despite being very good defensively, will need to be wary of what is happening on the flanks. Stopping as many crosses as possible is the best way to go about it.

Spain are susceptible to a ball over the top because they are not the quickest side on the turn. They are so good in possession that they want to get high up the pitch which means they can be caught out at the back. María Pilar León had problems against Denmark and Pernille Harder, but as a team the Scandinavians did not have the numbers to catch up with the Chelsea player, whereas England have Lauren Hemp and Beth Mead on the flanks to exploit space.

Finland scored early on thanks to a ball over the top which turned the defence and Spain were not quick enough to get back. Irene Paredes was lucky not to be dismissed against Germany after being outpaced by Alexandra Popp, pulling her down to stop her going through one-on-one. England will be mindful of this and Keira Walsh has the passing range to send balls into the right areas for forwards to chase.

The further good news for England is that they are scoring all types of goals: from long range to tap-ins and are not reliant on one scorer. They have the competition’s top scorer in Mead with five goals in three games and Alessia Russo is the joint second-highest scorer – and she has had to make do with coming off the bench in the group stages. It shows that even if England are struggling to find a goal, they have options onthe bench. There is no reason to think about changing things; Ellen White is doing a great job starting and Russo is the perfect impact player and that is a great role to have, especially as a young striker.

The players will be very pleased to go back to Brighton after defeating Norway 8-0 there. It is a ground I felt very comfortable at during my career because it is a fantastic new stadium where the fans are close to the pitch, creating an intimidating atmosphere. They have a built-in iPad system for music, which is good news for the dressing room DJs, and it really does help the players a lot pre-match. Let’s hope they will be rocking it after the match, too.

Australia’s Opals will face Belgium for their first knockout match at the women’s basketball World Cup in Sydney this Thursday after dodging an early meeting with tournament favourites USA. The structure of the World Cup draw is such that the top-two teams in one group are drawn randomly...
BASKETBALL・1 DAY AGO
The Guardian

Clarke targets automatic Euro 2024 qualification as next step for Scotland

Chelsea came from behind to beat West Ham in their Women’s Super League match at Kingsmeadow. Dagny Brynjarsdottir headed the visitors into a shock lead after only three minutes, before Chelsea responded as Sam Kerr twice hit the woodwork and Fran Kirby scored a deserved equaliser in the 40th minute. Kerr then tapped in a second on the hour, with Millie Bright nodding home a third shortly after, before Lauren James saw her late penalty saved.
SPORTS・8 HOURS AGO
The Guardian

Arsenal won 3-2 on aggregate thanks to Vivianne Miedema’s goal, but Jonas Eidevall was unhappy his side could not use a concussion substitute
UEFA・9 HOURS AGO

Basketball’s world governing body has opened an investigation after players on the Mali women’s team were filmed physically fighting one another following their World Cup loss to Serbia in Sydney. The scuffle between Salimatou Kourouma and Kamite Elisabeth Dabou broke out during a post-match interview with Serbia’s Sasa...
WORLD・2 DAYS AGO
The Guardian

The renowned US big-mountain skier Hilaree Nelson has gone missing on a trek in the Himalayas after apparently falling into a 2,000ft crevasse. Nelson and her partner, Jim Morrison, had scaled the 26,781ft peak of Manaslu mountain on Monday morning. Jiban Ghimire of Shangri-La Nepal Treks, which organised the expedition, told Outside Magazine that the pair reached the summit at 11:30am local time.
PUBLIC SAFETY・1 DAY AGO

Swedish seismologists says blasts detected near gas pipelines, which are leaking into Baltic sea
POLITICS・1 DAY AGO
The Guardian

It may never be possible to determine definitively whether Monday’s underwater explosions at the two Nord Stream gas pipelines were the work of Russian sabotage, but it is certainly the way to bet. The incidents took place close to – but just outside – the 12-mile territorial waters of...
ECONOMY・1 DAY AGO

Host speaks at funeral of Ralph ‘Sonny’ Barger, leader of the group considered by the DoJ to be linked to organised crime
POLITICS・2 DAYS AGO
The Guardian

Dutch cycling star Mathieu van der Poel will attempt to overturn a conviction for assaulting two teenage girls in a Sydney hotel the night before the men’s world championship road race. The Tour de France stage winner was arrested hours before Sunday’s race in Wollongong where the 27-year-old was...
PUBLIC SAFETY・2 DAYS AGO
The Guardian

Bridges plays an ex-CIA agent who has been in hiding for decades. Now, he’s paranoid old enemies are out to get him. Are they? Of course!
TV & VIDEOS・17 HOURS AGO
The Guardian

Authorities in Germany are trying to establish what caused a sudden drop in pressure in the defunct Nord Stream 2 gas pipeline, with a spokesperson for its operator saying it could have been a leak. The pipeline has been one of the flashpoints in an escalating energy war between Europe...
ENERGY INDUSTRY・2 DAYS AGO
The Guardian

No one in physics dares say so, but the race to invent new particles is pointless | Sabine Hossenfelder

In private, many physicists admit they do not believe the particles they are paid to search for exist, says physicist Sabine Hossenfelder
PHYSICS・2 DAYS AGO
The Guardian

The rapper Coolio died at the age of 59 in Los Angeles, his manager has confirmed. The artist, whose real name is Artis Leon Ivey Jr, passed away at a friend’s house, his longtime manager, Jarez Posey, told the Associated Press and other outlets including TMZ, Rolling Stone and Variety.
LOS ANGELES, CA・3 HOURS AGO