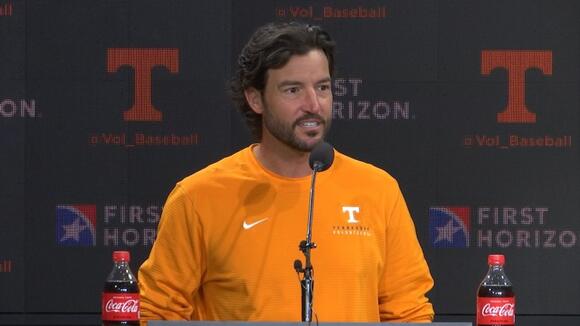 KNOXVILLE, Tenn. (WATE) – Tennessee baseball coach Tony Vitello will join MLB Network this weekend for 2022 MLB Draft coverage alongside a star-studded list of former players and other current managers from the professional and collegiate ranks who will provide analysis.

Vitello, who was awarded the National Coach of the Year Award for the second straight year by Perfect Game, will be among several college coaches who will contribute to MLB Network coverage throughout the draft. He and UCLA coach John Savage will join the channel’s regular analysts for coverage of the first 80 draft picks on Sunday, July 17 beginning at 7 p.m.

Pick-by-pick analysis and coverage will be broadcast live from Los Angeles, where the 2022 MLB All-Star game will be held Tuesday, July 19. This marks the second consecutive year the draft will be held at the site of the Midsummer Classic.

After a record-setting season for the Volunteers, several players who played a major role in their success are expected to selected in the first two rounds. ESPN MLB Insider Kiley McDaniel projected five Tennessee players to be selected in the first 80 picks in his latest mock draft projections.

ESPN projects two Vols, outfielders Drew Gilbert and Jordan Beck, to be selected in the first round. McDaniel predicted Gilbert will be selected 17th overall by the Philadelphia Phillies and Beck to follow him in the 18th pick by the Cincinnati Reds. Pitchers Blade Tidwell and Ben Joyce also forecasted to be early draft selections, as well as third baseman Trey Libscomb .

The Southeastern Conference has confirmed the times and broadcast information for the week 6 slate of games that will see the Tennessee Volunteers travel to Baton Rouge to take on LSU.
KNOXVILLE, TN・17 HOURS AGO
WATE

The Tennessee Volunteers went up in the Associated Press College Football Top 15 poll, their highest ranking since Week 5 of the 2020 season.
KNOXVILLE, TN・1 DAY AGO
WATE

A Sevierville woman was arrested and charged with aggravated cruelty to animals after police found 5 dogs abandoned at a house in "deplorable hoarder condition."
SEVIERVILLE, TN・3 DAYS AGO
Black Enterprise

ESPN’s Malika Andrews stirred up more controversy for the NBA’s Boston Celtics when she brought up the history of the team’s interim head coach from more than 13 years ago. During an on-air NBA Today broadcast last week, the sports world was upended when it was reported...
BOSTON, MA・21 HOURS AGO

Two days after Rebecca Gillespie was injured after being hit by a falling cell phone, she’s back in the hospital.
OKLAHOMA CITY, OK・3 DAYS AGO
WATE

Four people were arrested while deputies with the Knox County Sheriff's Office's narcotics unit served a search warrant in Knoxville according to police.
KNOXVILLE, TN・2 DAYS AGO
WATE

BLOUNTVILLE, Tenn. (WJHL) — A special agent with the Tennessee Bureau of Investigation (TBI) on Friday described events leading up to his discovery of 15-month-old Evelyn Boswell’s body on a family member’s property. Agent Brian Fraley took the stand at the Sept. 23 hearing to discuss the use of certain photos as evidence and revealed […]
BLOUNTVILLE, TN・3 DAYS AGO

A Knoxville teen who has been missing since early June has been found safe, according to the East Tennessee Valley Crime Stoppers.
3 DAYS AGO
WATE

An investigation is underway after an early Sunday shooting at an Alcoa Highway Latin dance club El Pulpo Loco that resulted in the injury of two people and the arrest of two teens, according to Knoxville Police.
KNOXVILLE, TN・21 HOURS AGO
WATE

Man killed after being struck by buzzard while riding motorcycle

A man was killed after being struck by a bird while riding his motorcycle Thursday afternoon in Lawrenceburg.
LAWRENCEBURG, TN・3 DAYS AGO
WATE

KNOXVILLE, Tenn. (WATE) — A 30-year-old Johnson City man is facing charges stemming from an encounter with first responders during the Tennessee-Florida game at Neyland Stadium on Saturday. The suspect is accused of assaulting a trooper and being “highly intoxicated,” according to an arrest report. The suspect,...
JOHNSON CITY, TN・22 HOURS AGO

The 2023 Games will be held in Las Vegas, and the flag football game at Allegiant Stadium is Sunday, Feb. 5.
LAS VEGAS, NV・23 HOURS AGO
WATE

Pedestrian hit and killed by car on Henley Street identified

KNOXVILLE, Tenn. (WATE) — The Knoxville Police Department has identified the pedestrian who was hit and killed by a car on Henley Street early Sunday morning. Officers responded to Henley Street at Clinch Avenue around 12:45 a.m. Sunday where 23-year-old Quinton Fields, of Knoxville, was struck by a car traveling north on Henley Street. He was transported to UT Medical Center where he was pronounced dead.
KNOXVILLE, TN・1 DAY AGO
WATE

Some animals at Zoo Knoxville are making predictions for the winner of Saturday's game against Florida, and the consensus is pretty clear.
KNOXVILLE, TN・3 DAYS AGO

Sticky stuff on your car? Here’s what it is

This honeydew is a sugary waste product of aphid insects called "phloem feeders."
2 DAYS AGO
WATE

Ryan Tannehill threw for 264 yards and a touchdown and ran for another score and the Tennessee Titans never trailed Sunday, holding off the Las Vegas Raiders 24-22 for their first victory this season.
NASHVILLE, TN・21 HOURS AGO
WATE

Hurricane Ian is prompting NASA to move its moon rocket off the launch pad and into shelter, adding weeks of delay to the lunar-orbiting test flight.
AEROSPACE & DEFENSE・20 HOURS AGO
WATE