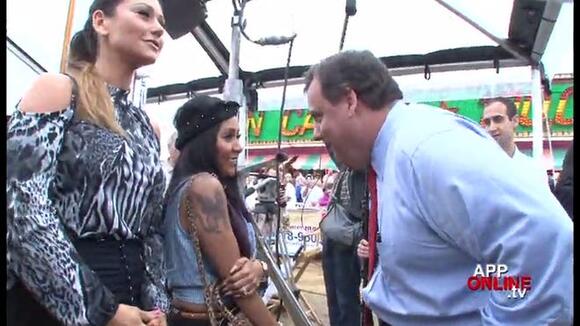 In a Cameo video shared to Fetterman's Twitter, "Jersey Shore" cast member Nicole "Snooki" Polizzi describes herself as a "hot mess" and talks to Oz about their "home," New Jersey.

"I heard you moved from New Jersey to Pennsylvania to look for a new job, and personally, I don't know why anyone would want to leave Jersey, cause it's, like, the best place ever and we're all hot messes," Polizzi said.

"I know you're away from home and you're in a new place, but Jersey will not forget you," she added.

Fetterman's campaign has taken shots at Oz for his ties to the Garden State. In a recent campaign ad, Fetterman charges that Oz "just moved here (to Pennsylvania) to run for office."

Oz, who has the endorsement of former President Donald Trump, has said he moved to Pennsylvania in 2020 and attended the University of Pennsylvania in the 1980s, but he lived in New Jersey for three decades and has shared social media posts in his New Jersey mansion long after he said he moved, according to the Philadelphia Inquirer.

In the video, Polizzi tells Oz he'll be "back home in Jersey soon."

It's unclear whether Polizzi knew her video was meant to address Oz, as she never addresses him by that title, calling him just "Mehmet" instead. She did not immediately respond to a USA TODAY requestor comment.

A personal use Cameo video from the "Jersey Shore" star starts at $300, according to her Cameo page. Fetterman's campaign did not respond to USA TODAY's request for comment.

In response to a request for commenthe Oz campaign pointed to a recent ad calling Fetterman's agenda "radical" and a screenshot from a 2013 incident in which Fetterman pulled a shotgun on a Black jogger after claiming he heard gunshots nearby.

Oh yeah! Snooki should be a great spokesperson…NOT! Vote For Mehmet Oz 🇺🇸

Snooki will never ever live down her reputation of being a sloppy loud mouth drunk…..

'DEATH WISH'? What Trump and his wannabes did in one weekend should scare us all.

In the Republican Party of Donald Trump and Marjorie Taylor Greene, only those faithful to Trump’s MAGA movement are safe.
POTUS・2 DAYS AGO
USA TODAY

Donald Trump will be 'convicted of multiple felonies,' George Conway speculates to Salon

Conservative lawyer George Conway is predicting former President Donald Trump will be slapped with a felony conviction for various crimes by the end of the year. "I think he could go to prison, but it is more likely that he will serve home confinement," Conway told Salon in a wide-ranging interview published Monday.
POTUS・2 DAYS AGO
USA TODAY

A lower federal court said a reasonable juror could conclude that only a "reckless man" would make the claims made by MyPillow founder Mike Lindell.
CONGRESS & COURTS・2 DAYS AGO

Barack Obama had no direct involvement in the custody of presidential records from his time in office, contrary to a claim by Donald Trump.
CHICAGO, IL・2 DAYS AGO
USA TODAY

The race to fill retiring Republican U.S. Sen. Richard Burr's North Carolina seat is close to a tie, three polls found in recent days. In a Civitas Poll, 44% of respondents said that if the election were to happen today, they would vote for former North Carolina state Supreme Court Chief Justice Cheri Beasley.
CONGRESS & COURTS・1 DAY AGO
USA TODAY

Will the Supreme Court trample on free speech or uphold standing principles?

The Supreme Court is expected to decide whether businesses can choose clients based on their beliefs. Today we focus on that case.
CONGRESS & COURTS・12 HOURS AGO
USA TODAY

Republican pitch for people worried about abortion bans: How about a discount on diapers?

With Roe v. Wade overturned, Republican lawmakers across the country are now offering abortion bans and discounts on diapers.
WOMEN'S HEALTH・2 DAYS AGO

OnPolitics: How a 2022 hurricane could preview 2024 election as Biden visits Florida

Migrants flown to Martha's Vineyard were recruited by woman sent from Florida to Texas: report

The 48 migrants that were flown into Martha's Vineyard by Ron DeSantis were recruited by a former member of the U.S. Army, the New York Times reports.
FLORIDA STATE・2 DAYS AGO

In Arizona, The two are expected to clash over issues that have dominated other competitive races this election season such as inflation and abortion.
ARIZONA STATE・1 HOUR AGO
USA TODAY

Supreme Court decisions feed common myth that our country is, or should be, a 'Christian nation.' Don't tear down the wall between church and state.
CONGRESS & COURTS・1 DAY AGO
USA TODAY

In an effort to avoid self-incrimination, Arizona GOP Chair Kelli Ward refused to answer questions before the Jan. 6 committee.
ARIZONA STATE・18 HOURS AGO

Billionaires account for $1 of every $10 raised this election. These 11 anted up the most.

At an Ankeny School Board meeting, the woman called out one of the guest drag performers, accusing them of being a "Satanic worshiper."
IOWA STATE・1 DAY AGO
USA TODAY

Mar-a-Lago documents: Why is Donald Trump asking the Supreme Court to intervene?

Trump's request to the nation's highest court is narrow but once again thrusts him and the justices into political controversy.
CONGRESS & COURTS・18 HOURS AGO
USA TODAY

Sen. Mark Kelly, D-Ariz., is leading the race for Arizona's U.S. Senate seat, a CBS News poll released Wednesday found. The CBS poll shows that 51% of Arizona voters who responded to the survey would vote for Kelly if the midterm election were held today, while 48% would vote for Trump-endorsed Republican candidate Blake Masters.
ARIZONA STATE・18 HOURS AGO