Another alligator found just ambling around in Wisconsin 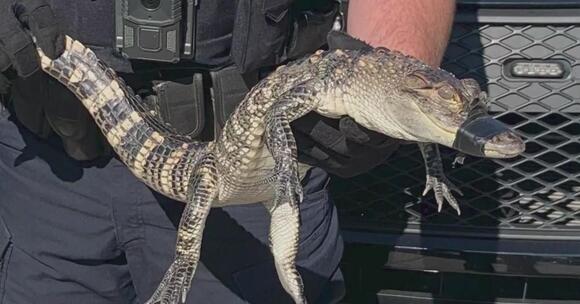 "Our dispatchers gave the call out, you know, 'Respond to an alligator in the roadway at 22nd Avenue and 24th Street.' And you could hear the chuckle in the voice from the dispatchers," Kenosha Lt. Joseph Nosalik said.

But even though it sounded like a prank, indeed an alligator was found ambling around.

Now back with its owner, the alligator was able to escape from a backyard where it was spending the day in a kiddie pool.

By the time he realized the gator was gone, police had already recovered him. The man who claimed the alligator said, while it could in theory put a bite on you, it really isn't dangerous.

Police determined there's nothing illegal about keeping an alligator and returned it to the owner.

"It's a lot of sad news that we deal with, and to be able to respond to a call like this and have a few laughs during your daytime, yeah, it's badly needed," Nosalik said.

Prill said that he's only keeping the alligator for a friend, and promises to keep a closer eye on it in the future.

It would eat a cat or maybe a small dog. And to say these would not hurt anyone is not being truthful! These animals are not pets people!

about time this state makes it illegal to possess exotic pets. this keeps happening yearly. the Wisconsin River is not a dumping ground

IMHO, I dont think they should be legal to own in any state.

MILWAUKEE (AP) - A 10-year-old Milwaukee, Wisconsin boy intentionally aimed a gun at his mother, then shot and killed her, because she would not buy him a virtual reality headset, prosecutors said.The boy initially told police that the Nov. 21 shooting was an accident, according to criminal charges obtained by the Journal Sentinel. But later he said he intentionally aimed at his mom before shooting her. The boy was charged as an adult last week with first-degree reckless homicide.Wisconsin law requires children as young as 10 to be charged as adults for certain serious crimes, though the boy's attorneys can...
MILWAUKEE, WI・2 DAYS AGO
CBS Minnesota

LanzaTech's carbon recycling technology earned it a spot as one of 15 finalists for The Earthshot Prize — one of the world's top environmental prizes.  The Prince and Princess of Wales are set to attend the second annual awards ceremony in Boston on Friday for the prize, which was established by Prince William. The Chicago-based company is the only U.S. finalist in the competition this year.  LanzaTech's technology has the ability to turn planet-warming carbon pollution into everything from party dresses and plastic bottles to Lululemon gym shorts, household cleaning products and jet fuel that powered a recent Virgin Atlantic flight from Orlando...
CHICAGO, IL・1 DAY AGO