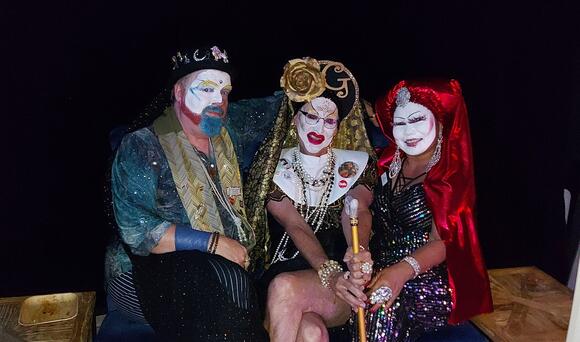 If you’re out in the Coachella Valley and you happen to run across a nun in whiteface, do not be alarmed.

These are the Palm Springs members of the Sisters of Perpetual Indulgence , an "order" conceived in San Francisco in the 1980s. It has since expanded nationally to 45 chapters in 25 states. Worldwide, the organization has grown to include multiple chapters in Canada, Australia, Colombia, France, Germany, Scotland, Switzerland, the United Kingdom and Uruguay.

Back in the '80s, young, otherwise healthy gay men were dying from a disease for which there was no cure. AIDS was the biggest medical scare of the 20th century and, according to Gallup , by 1986 44% of Americans said that they or someone they knew "avoided places where homosexuals might be present as a precaution to avoid contracting AIDS."

The sisters began as a way to offer assistance to those who had contracted HIV or were dying from AIDS — and to educate the uninfected on how to protect themselves.

“The original reason for the whiteface goes back to San Francisco," says Craig Dunham , aka Brother T GingerBear . "The sisters wanted to be able to go out on a Friday night to the Castro and minister at the bars and talk about safe sex and offer condoms and talk to the guys in the bars about safer sex practices to try to slow down some of the spread of AIDS. But then they wanted to be able to go out on Saturday as themselves and have fun and not have the people go 'oh yeah, you’re Sister So-and-So.' It was sort of a camouflage. 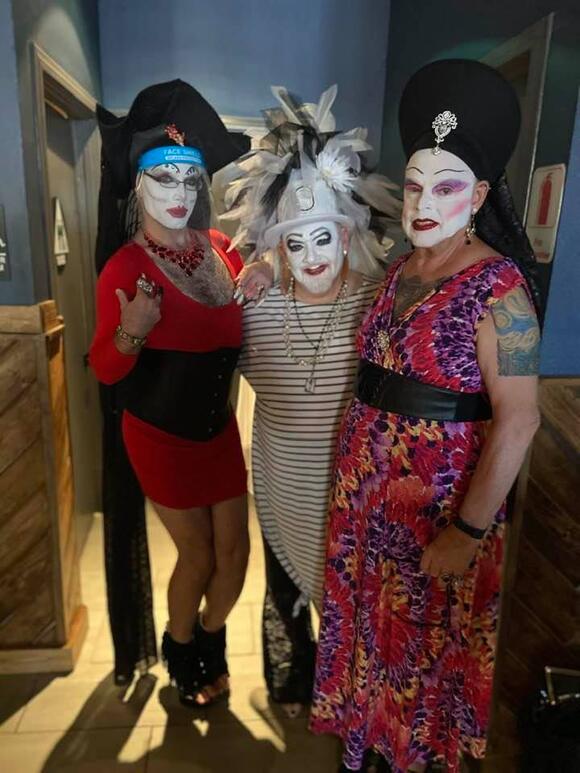 While most of the sisters are men, there are currently two members of the local order who are cis women and one who identifies as gender fluid, says Brother T GingerBear.

Since its 205 inception in the Coachella Valley, the Palm Springs Sisters of Perpetual Indulgence have raised money for various charities in a variety of ways, including hosting a Sunday night bingo game every other week at One Eleven Bar in Cathedral City.

“We've donated over $100,000 to various groups and 501(c)(3)s," says Brother T GingerBear, whose titles within the organization include abbot (president), Minister of Discipline, grants committee chair, board member/secretary and UNPC (United Nuns Privy Council) co-delegate of The Palm Springs Sisters of Perpetual Indulgence: The Irreverent Jewels of the Desert.

"The last few years, we've put together toy drives and school supply drives to assist families in need during back-to-school and the holidays.” 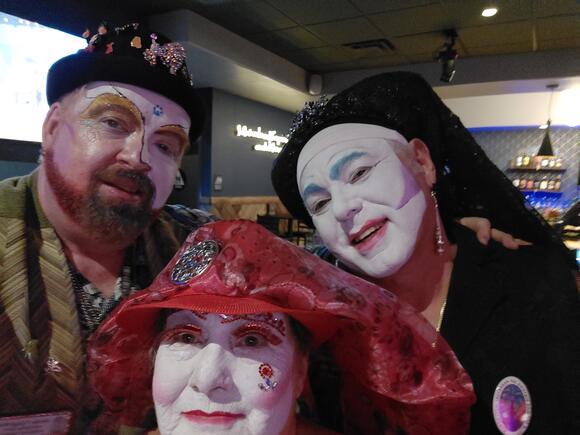 The sisters have a guide with policies and procedures they call their Nun Book; it outlines the organization's vision and mission, with headers like Freedom of Expression, Diversity, Social Activism, Social Service, Fundraising and Spiritual Development.

In addition to their philanthropic endeavors, every year the group holds a Luminaria, a remembrance ceremony for those the community has lost, including sisters, LGBTQ celebrities and loved ones. It's open to the public and held on Oct. 30, All Hallows Eve, which Brother T GingerBear describes as “kind of mystical and otherworldly.”

“We have little bags that we put candle lights in, and attendees can write a message to somebody they've lost,” Brother T GingerBear says. “We line up and down Arenas (Road) in front of Streetbar and Hunters. At midnight, we take all the bags and burn them in a fire pit until they're ashes. It's a symbolic way of getting that message up to dear Grandma: 'I miss you, love Bobby.'"

The sisters have also provided blessings to local businesses such as Townie Bagels and V Wine Lounge at their grand openings.

“It kind of has a religious symbology but it's still going to be irreverent and fun because, I mean, hell, we're sisters. It has to be fun,” T Ginger Bear says.

And why is T GingerBear a brother instead of a sister?

“I really don't feel that I have that feminine persona," he says. "It just didn't strike me. Besides, this way I don't have to worry about putting on lashes.”

Learn more about the Palm Springs Sisters of Perpetual Indulgence at pssisters.org .

Kay Kudukis has written for a number of local publications, including Palm Springs Life, Me Yah Whae, R/M: The Magazine of Rancho Mirage, Broadway World and the official Modernism Week program.