What I Learned From Pitching Marc Benioff My Startup at Dreamforce 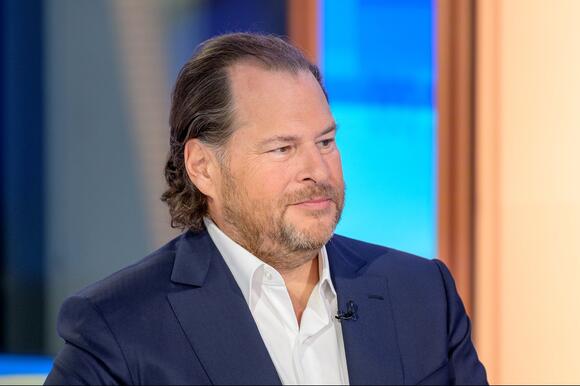 In the Fall of 2014, my brother Jeremy and I had just begun working on our first "real" startup together. We both had day jobs. Jeremy was working for a small marketplace startup in San Francisco, and I was selling enterprise software for an analytics company in New York. What we both realized in our day jobs was how difficult it was for our employees to share constructive feedback in a way that would help our company and leaders grow and improve. There needed to be a safe space for employees to share feedback on their professional experiences and the people they work with.

Jeremy and I became obsessed with this problem. Jeremy spent his evenings learning Ruby on Rails to code the first version of our app. The site was called Backdoor — however, we didn't own backdoor.com. Unfortunately, we owned checkmybackdoor.com, which wasn't much better. The idea was simple, and the interaction was basic: a public forum to provide anonymous feedback on your work colleagues with the ability to "thumbs up" or "thumbs down" and add a comment on a work colleague's profile. We validated an employee's connection to their colleague based on LinkedIn's data. In September, we launched Backdoor to a small group of folks at our day jobs.

As you can imagine with any anonymous feedback platform, particularly one that was professional, moderation was important. We saw a few bad apples on the site, but almost 85% of the content on Backdoor was constructive and positive. That was good enough for us. We had a functional MVP. We had real users. We had organic growth, as others were pulling their friends and work colleagues into the network. I began seeding the network by emailing employees at companies where their work colleagues had been reviewed on Backdoor. We grew to 500,000 profiles on the platform, and with that traction, I was convinced we were ready to raise a seed round.

However, Jeremy and I had no idea how to raise capital. From my days in enterprise software, I always found success the higher I sold into a company. With that in mind, I asked myself, who is the most influential person in enterprise SaaS, who valued company culture and would understand the problem we were setting out to solve. The answer: Marc Benioff, CEO of Salesforce.

Benioff would be a perfect investment partner. But how the heck does someone get in touch with "the Colossus of Cloud"? In October, my good friend Victor had received an extra pass to Salesforce's annual conference, Dreamforce, from his company that they weren't planning to use. He asked me if I wanted to attend, as it might be a good opportunity to learn about ways to grow and scale Backdoor. I knew that was my window.

Take the shot that no one dares to take

On the first day of Dreamforce, I hovered outside of the Moscone Center in San Francisco to see if I might get the chance to pitch Benioff. We waited for almost two hours, and I'd almost given up hope when I saw the cameras flash and a giant security entourage funnel out of the theatre. It felt like a U.S. President had just left the building. Coincidentally, it was the end of Tony Robbins and Benioff's keynote. I looked at Victor and told him, "I'm going in." Victor replied, "You're crazy."

Benioff was escorted by three bodyguards, so I decided to approach him head-on so as not to get tazed or arrested. I reached past the lead security guard, extended my hand out to Benioff and said, "Marc, we haven't spoken before, but I know you care about Salesforce's culture. I'm building a better version of LinkedIn and we already have 500,000 users on our platform. Would you be open to learning more?"

After Benioff realized I wasn't there to assassinate him, he waved off his bodyguards and pulled out his phone. He asked me for the name of the site. I responded firmly, "backdoor.com." Benioff raised his eyebrows. I clarified, "Well, technically we don't own the domain for backdoor.com. It's actually, checkmybackdoor.com." Benioff smiled and said, "You guys need to hire a proper marketer. Email me at CEO@salesforce.com, and we'll take a look." Bam! We had a meeting.

That evening, I emailed Benioff. Two days went by — no response. I sent a follow-up. Four more days went by — no response. I emailed a third time. Finally, Benioff got back to me with an introduction to the Salesforce Ventures team. We met at Salesforce HQ to share the pitch. Benioff wasn't in attendance, but his team asked a ton of questions about our growth plans and our team. We exchanged ideas about the future of HR tech and Salesforce's position around employee experience. In the end, Salesforce Ventures let us know that we were too early for an investment from Salesforce. More specifically, we didn't have a strong data moat for the network we were building, and we were highly dependent on LinkedIn for our early growth, which wouldn't be sustainable.

It's okay to take no for an answer, but understand the "why" behind it

It sucked hearing "no," especially on the back of a referral from the Sultan of SaaS. But Salesforce's feedback helped us think critically about the business we were building, as well as how we approach different profiles of investors and venture firms based on the size and stage of our business. Jeremy and I pressed on, pivoted to enterprise feedback and found an early market growing in the enterprise messaging app ecosystem. Checkmybackdoor evolved into Growbot, the first application for employee feedback built on the Slack platform.

Fast forward a year later, and we met Phil Libin, founder of Evernote and mmHmm, and former partner at General Catalyst. Libin saw our vision of building a healthier and happier workplace. He took a chance on Jeremy and me, leading our seed round. When Libin asked us who else we had on our list of prospective investors to fund our company, there was only one name that we knew we had to get involved: Two years later, we had a term sheet from Benioff as our first and only angel investor in Growbot.

To this day, I'm not entirely sure if Benioff remembers me as the guy that bull-rushed his security entourage and pitched him the idea for backdoor.com. However, maybe he did, and maybe that helped him gain conviction that we were in this for the right reasons. I'll have to ask him someday.

As the digital landscape evolves, new marketing tactics emerge. Here are five alternative strategies businesses can use to stand out.
ECONOMY・2 HOURS AGO
Entrepreneur

The founding partner of LongHash Ventures discusses its Fund II and why people should care about the crypto landscape.
MARKETS・2 HOURS AGO
Entrepreneur

Using the minimum viable product model, you can get your idea into the world in less time than you ever thought possible.
ECONOMY・1 DAY AGO

TikTok Is Doling Out Age-Old Resume Advice. This Former Microsoft Recruiter Says You Should Ignore It

It might be a bad idea to copy-paste a job description into your resume. Here's why.
BEHIND VIRAL VIDEOS・23 HOURS AGO
Entrepreneur

The Fed's consecutive rate hikes to control inflation has created an unfavorable macroeconomic climate for growth tech stocks. Since Cathie Wood and her firm Ark Invest have significant exposure to...
STOCKS・6 HOURS AGO
Entrepreneur

Jay-Z is putting his money behind a new robot-operated pizza truck business with big plans to change the food industry. He invested in Stellar Pizza, a restaurant on wheels that can churn out 420 pizzas a day and cook a single pie in less than five minutes thanks to its robot technology, according to a press release obtained by Fortune. The artist-turned-entrepreneur led the $16.5 million funding round through his venture capital firm Marcy Venture Partners (MVP).
CELEBRITIES・1 DAY AGO
Entrepreneur

Experts reveal how new startups are reaching a global network of investors.
TECHNOLOGY・2 DAYS AGO

Hernan Lopez on How Success Happened at Wondery

Meet the visionary who saw the big opportunity In podcasting before most others.
ECONOMY・2 DAYS AGO
Entrepreneur

'I'm a Little Tired of the Internet': Elon Musk Interview From Decades Ago May Hint Toward Future Leadership Plans at Twitter

Elon Musk has had no shortage of drama lately, especially when it comes to his flip-flopping on whether or not the billionaire will go through with his bid to purchase Twitter for the originally proposed price of $54.20 per share, roughly $44 billion. Though it's unclear what Musk's plans are...
BUSINESS・22 HOURS AGO
Entrepreneur

4 Ways to Revolutionize Your Customer Experience in The Metaverse

As well as providing customers with an immersive experience, businesses can use the metaverse to take them on a truly personal journey.
TECHNOLOGY・1 DAY AGO
Entrepreneur

How Success Happened For Kristin Kenney, CEO of Life in High Gear Coaching

Why individuals and corporations are flocking to Kenney's coaching company, Life in High Gear.
ECONOMY・23 HOURS AGO

Apple CEO Tim Cook Doesn't Like the Metaverse. Here's the New Technology He Thinks We Won't Be Able to Live Without.

Cook says this other technology "will affect everything."
BUSINESS・2 DAYS AGO