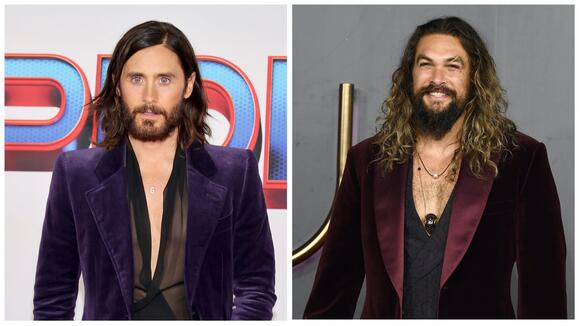 Think of the wild stories shared on this trip.

In it, all three are hanging out on a boat in the perfectly blue waters along the coast of the island paradise of Mallorca – as per Leto’s caption: "Mallorca Adventures w / legends Chris and Jason." Leto is the only one who kept his shirt on, which can make sense when you're hanging out with Momoa and his epic pecs.

From the giant smiles and all three thrusting various thumbs up, devil horns, and fists in the air, it looks like a great time between pals.

It’s true Leto and Momoa have appeared within the DC universe of movies – Leto as the Joker and Momoa as Aquaman. Leto has built a rep as a somewhat mercurial, mysterious star, while Momoa is a happy-go-lucky action hero. Then Sharma comes from a whole other world, as he is one of the most famous rock climbers of all time.

As Entertainment Tonight reported, the party was a random run-in, as Sharma noted in his re-post of the pic. "Look who @prideofgypsies and I ran into in the middle of the Mediterranean!” said Sharma’s caption. “Epic times with an epic crew!"

Momoa also shared Leto’s snapshot on his Instagram Story. Momoa recently split from Eiza Gonzalez , and while an ET source said Momoa is “focused on his career right now,” it seems like he’s fitting in some fun in the sun first.

Though who knows? Maybe the three cooked up an awesome movie idea while lounging in the boat. Aquaman swims to Mallorca and shimmys up a mountain to get to the Joker’s secret lair with the aid of a world famous climber? Hollywood, if you're listening...

The actress/model did her best to set off the return of jeggings by sporting a full bodied catsuit in an eye-grabbing pink acid wash with minimal accessories.
BEAUTY & FASHION・20 HOURS AGO
Audacy

The 41-year-old Wild ‘N Out comedian took to social media on Friday to welcome his newborn son, Rise Messiah Cannon, with ex-girlfriend Brittany Bell. Rise is their third child together
CELEBRITIES・4 DAYS AGO
Audacy

Hailey Bieber gets fresh for fall in neon midi dress

Hailey Bieber got the season kicked off with an eye-popping calf-length dress in opposition to the usual earth and muted tones usually associated with fall.
BEAUTY & FASHION・22 HOURS AGO
Audacy

Ed Sheeran is helping the Pokemon franchise and all of its fans get excited for the release of Pokemon Scarlet and Pokemon Violet with a new song.
CELEBRITIES・4 DAYS AGO

Alex Rodriguez opened up about his famous ex-fiancée, Jennifer Lopez, sharing that he wishes her ‘the very best.’ The former Yankees star also spoke about her family and children.
CELEBRITIES・1 DAY AGO
Audacy

The day has come! On a brand new episode of Not Skinny But Not Fat, Amanda Hirsch’s #1 podcast guest Kourtney Kardashian Barker sat down for an exclusive interview to talk all things Travis, therapy, blending families, motherhood, and more. LISTEN NOW: LIVING LIFE WITH KOURTNEY KARDASHIAN BARKER. These...
FAMILY RELATIONSHIPS・20 HOURS AGO
Audacy

Tate McRae is joining us at Audacy's 'We Can Survive' 2022

With ‘We Can Survive’ 2022 less than 20 days away, we are excited to announce one more artist addition — Tate McRae! McRae joins the already star-studded lineup, including Alanis Morrisette, Halsey, Weezer, OneRepublic, and Garbage.
LOS ANGELES, CA・1 DAY AGO

Ringo Starr and the international incidents you never knew

While his star may shine brightly being known for his role as the drummer for legendary Rock group, The Beatles, things have not always been bright for Ringo Starr
CELEBRITIES・17 HOURS AGO
Audacy

Lil Nas X forced to pause his concert for bathroom emergency: 'I’m gonna be a minute or two'

Lil Nas X isn’t shy or discreet. In fact, he’s often stirring up buzz, especially on his Twitter feed. So, naturally when nature called during his concert, Nas paused the show, but not his candid commentary.
MUSIC・1 DAY AGO
Audacy

The ‘That ‘70s Show’ couple keep the bathroom door open at all times after the births of their children. ‘They were knocking every two seconds,’ Kunis said.
CELEBRITIES・3 DAYS AGO
Audacy

’Blue’s Clues’ is getting the feature-length treatment at Paramount+ and will see the return of fan-favorite and original show host Steve Burns on Nov. 18.
MOVIES・19 HOURS AGO

“Me and my friends bought [a] movie theater,” Kevin explains. “We just renamed it Smodcastle Cinemas… and now that we got the movie theater I’m gonna be here in Jersey a lot more often doing a lot more programming.”
ATLANTIC HIGHLANDS, NJ・4 DAYS AGO