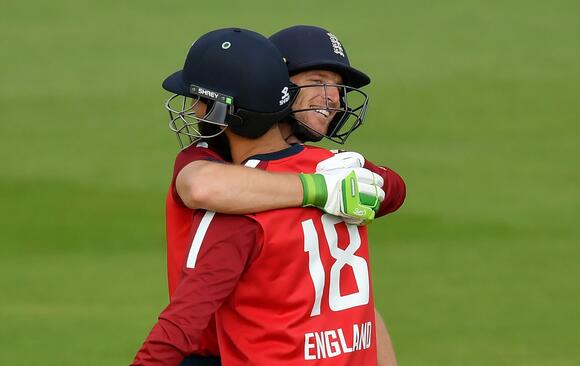 Moeen Ali has urged England not to worry about making a losing start to Jos Buttler ’s captaincy reign, insisting the team will peak at the right time.

Buttler stepped up as white-ball skipper after Eoin Morgan’s retirement last month, winning just one of his first four matches against a strong India side.

The tourists took the Twenty20 series 2-1 and then routed England by 10 wickets in the first one-day international, dismissing them for 110 before knocking off the runs without loss.

They have the chance to put things right at Lord’s on Thursday, the three-year anniversary of their World Cup final win at the same ground, but with Buttler new to the top job and head coach Matthew Mott also a recent arrival, Moeen is taking a longer-term view.

“Jos is a brilliant leader. He has done it over the years when Eoin hasn’t played but it is going to take a couple of games in all the formats,” said the all-rounder.

“As a new captain no matter how cool you are you want to get off to a winning start but he knows there is a long way to go and the team will be fine.

“There is no need to panic or change. It definitely takes time to bed in and it will take a few defeats, which is fine. We have been dominating for the last few years in a nice way and playing well. We’ve had a lot of success but sometimes I feel we don’t want to peak too early.

There is no need to panic or change. It definitely takes time to bed in and it will take a few defeats, which is fine

“We want to win now but you don’t want to win all games. Sometimes you learn more from losing games. We have lost a few games at the moment but that is good for us going forward and closer to a World Cup we will start winning.”

Moeen was named by Morgan as a potential successor when he stood down, a recognition of his growing influence in the dressing room.

Now, with eight years of international cricket and 232 caps under his belt, the 35-year-old stands ready to support Buttler.

“We need to step up as senior players in the team. When it is your turn to do that, you will do it,” he said.

“Jos does speak to the bowlers beforehand, but he will tell me sometimes to go up to the bowler. It works nicely. When Morgs didn’t play he was always like that. It is not a problem having a keeper as captain.”

Moeen also offered his initial assessment of Mott, who left his role with Australia’s all-conquering women’s side after edging out a strong field of candidates.

Moeen likened him to compatriot Trevor Bayliss, the World Cup-winning coach who empowered the players and viewed his role as a facilitator.

“He has settled in really well. He is a lot like Trevor but he has his own ways, he’s very relaxed,” said Moeen.

“The dressing room almost runs itself most of the time, so the boys are feeling good.”

Head coach Matthew Mott says England’s tour of Pakistan has helped him settle on a first-choice XI for this month’s T20 World Cup, with a heavy hint that Harry Brook has forced his way in.England won an entertaining seven-match series 4-3 after walking away with Sunday’s decider in Lahore, a commendable achievement for a squad missing several big names.Ben Stokes, Liam Livingstone and Chris Jordan all missed the trip but will join up in Australia later this week, while captain Jos Buttler acted as an observer in Pakistan as he opted not to risk his own recovery from a calf...
SPORTS・2 HOURS AGO
The Independent

Jesse Marsch has urged his players not to become frustrated by the opposition’s time-wasting tactics when they visit Elland Road.Aston Villa boss Steven Gerrard admitted after Sunday’s goalless Premier League draw that his side had deliberately tried to slow the game down in a bid to counter Leeds’ high-tempo style.Marsch’s 10 men held on for a point in an ill-tempered start-stop encounter after Luis Sinisterra’s dismissal early in the second half.Leeds’ head coach said: “I almost feel like we have to apologise (to fans) because they don’t get an entertaining match.“They get a match that’s totally slowed down from the...
PREMIER LEAGUE・1 HOUR AGO
The Independent

Manchester City inflicted one of rivals United’s highest-scoring Premier League defeats with Sunday’s 6-3 stroll at the Etihad Stadium.A result featuring hat-tricks for Phil Foden and Erling Haaland, and which could have been even more emphatic but for two meaningless late Anthony Martial consolations, was only the fourth time United have conceded six in a Premier League game and made City the first team to inflict that fate twice.Here, the PA news agency looks at United’s worst defensive days in the competition.Hit for sixSunday was the first time United have conceded six since their defeat to Tottenham almost exactly two...
PREMIER LEAGUE・1 HOUR AGO