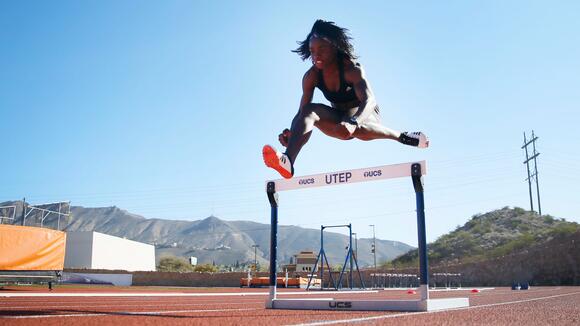 The axiom that what's important isn't how you start, it's how you finish hasn't always held true with 100-meter hurdler Tobi Amusan.

The last two times the UTEP alum and El Pasoan has competed in a championship year — 2019 at the World Championships in Doha, Qatar and the 2021 Olympics in Beijing — Amusan was at her best at the tail end of the season, a month past the race on the big stage.

In both of those seasons, the Nigerian was a close fourth at the Worlds and then Olympics, only to close her year with Diamond League wins, performances that would have put her on a podium in Doha or Beijing.

As Amusan heads to Eugene, Oregon for the first World Championships on American soil (they begin their 10-day run Friday), the idea is to improve on that timetable, to be at her best when she hits the track at Hayward Field on July 23 and 24.

Given that Amusan just ran a personal best three weeks ago in Paris (12.41 seconds, which also broke her own African record), Amusan thinks she has it right.

"Most definitely," said Amusan, who doubles as a UTEP volunteer assistant coach. "I've been healthy most of the season, that's the best place you want to be in track and field. I'm just trying to stay healthy and go execute each round and get to the top of the podium in Eugene."

"She's in good form," Golding-Clarke said. "We've been trying to figure out when we should start peaking her. In past years I've got it wrong because she's gotten fourth in both the World Championships in Doha (2019) and in the Olympics last year.

"This year we're trying to figure out when we need to start that. I feel she's in some of the best shape she's ever been in. I'm praying and hoping it works this year."

Amusan heads to Eugene with the fourth-fastest time in the world this year, but is coming off her all-time best performance. She also runs the 400-meter relay for Nigeria on the 22nd and 23rd. Amusan feels she's done the work, now she just needs to run within herself.

"When you run against the top athletes in the world, execute and the time will take care of itself," Amusan said. Paris "was just a race to get me fitter for the season and prepare me for Worlds."

Said Golding-Clarke: "We've always trained for a medal, always ended up with the short end of the stick. I feel like this year, if she stays mentally strong, she's prepared. I'm hoping and praying she executes well so she can go out and be top three.

"The biggest key for her is to stay stress free, focus on what we've been doing. With that she'll be in good shape to go out there and do what she does best."

That could mean her first major medal, something she's been so close to before.

Bret Bloomquist can be reached at 915-546-6359; bbloomquist@elpasotimes.com; @Bretbloomquist on Twitter.