After a 36-32-3 season and a fourth-place finish in the ECHL’s Central Division, signings for this fall's Cincinnati Cyclones season have begun.

"We're excited to have him back," Cyclones head coach Jason Payne said. "He's a staple in the community and a staple on our team. He's our leader, our captain and he's there for a reason."

Bringing the veteran back should provide some consistency in the locker room as well as off the ice. Payne calls him the consummate professional.

"There's not one single recipe for every guy on this team," Vaive said of his experience. "Some guys are aspiring to move up. Some are trying to make the team. There's a lot of branches off of that. You kind of have to take time to instill this culture on to different guys."

Part of his role bringing the team together has involved bowling, golfing, dinners and even a Super Bowl party to watch the Bengals last February. The emphasis is on becoming friends outside of hockey.

"Building friendships and a family atmosphere, I think, carries over to on-ice performance," Vaive said.

The four-year former Miami RedHawks player (2007-2011) will be playing his eighth season for the Cyclones dating back to 2011-12. In between, he's also played for San Antonio, Hartford, Bridgeport, Rochester and Belleville in the American Hockey League and Greenville and Fort Wayne in the ECHL. He was part of the Kelly Cup champion Komets in 2020-21 before his most recent stint in Cincinnati.

It will be Vaive's 10th professional season overall.

"It goes by quick," Vaive said. "It makes you really value the grind that you went through and all the guys go through. It's something I can look back on and say it was worth it. The hours and the gyms and travel, I wouldn't trade it for the world."

From Buffalo, Vaive has obviously spent a lot of time here based on his various seasons with the Cyclones. Some have even referred to him as "Mr. Cincinnati." He admits he's spent more time in the Queen City than anywhere in his adolescent to adult life.

"I would consider it my second home," Vaive said. "When my dad was playing and coaching, we were constantly moving. It's been nice to actually have some roots somewhere and experience a city away from hockey. My girlfriend's here now and that adds to the home feeling."

As for Cincinnati recommendations, count Vaive in the Skyline Chili camp. Another  favorite is the cheesesteak from The Pony in Over-The-Rhine. "He's found a home here," Payne said. "He's been able to find his niche. The fans here welcome him and love him as one of their sons. What can you ask more of him? What's ever required, he'll do. If he has to mix it up, put the puck in the back of the net, throw some checks, be an energy leader, calm the guys down, that's why he's the captain."

As a fan favorite, Vaive has reached 100 ECHL goals and registered 500 penalty minutes for his feistiness. More important than the individual achievements, he would like to deliver Cincinnati another Kelly Cup. 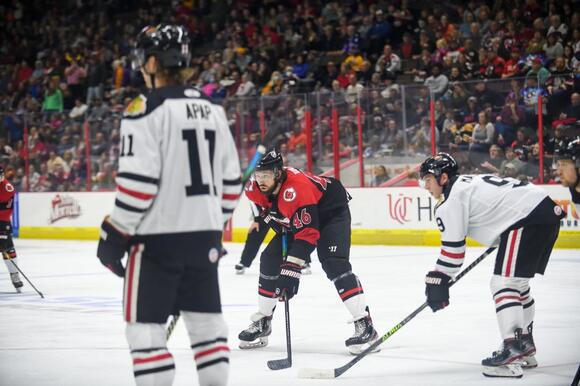 Vaive is a former fourth-round NHL pick of the Anaheim Ducks in 2007. His father, Rick Vaive, was an NHL All-Star right wing. Cyclones coach Payne hails from Toronto, one of Rick Vaive's pro stops. He jokes with Justin about once procuring an autograph from his father when he was with the Maple Leafs.

Vaive and the Cyclones begin ECHL play Oct. 22 at Fort Wayne, then have their home opener Oct. 29 against Iowa. They were 23-11-1-1 at the Heritage Bank Arena last season. Of their 36 home games, 25 will come on Fridays, Saturdays or Sundays.

BOND HILL, Ohio – Late in the third quarter of Friday’s high-stakes Cincinnati Metro Athletic Conference showdown between Taft and Woodward, Taft head coach Demarco Bradley Sr. opted for a 2-3 zone defense. The decision was risky and was coming off the heels of a 16-7 Woodward run...
TAFT, CA・2 DAYS AGO
Cincinnati.com | The Enquirer

The Bengals’ loss to the Chiefs might be attributed to many things, even to ignorant comments made by the city’s mayor. Those comments about the opposing quarterback were indeed weak and embarrassing. Cincinnati has many problems that need tended to. Mayor Aftab Pureval should stick to this business...
CINCINNATI, OH・1 DAY AGO