'This is crazy': 911 callers describe chaotic scene after Lil Tjay shooting in Edgewater

A series of 911 calls made after rapper Lil Tjay was shot in Edgewater in the early morning hours of June 22 − including from a security guard with a victim bleeding in the back of his car and a man calmly describing the mayhem from his apartment window − shed light on a chaotic scene with multiple victims and vehicles spread out over several blocks.

Authorities said Tjay was shot during an attempted robbery while with two of his friends, Antoine Boyd and Jeffrey Valdez, in the parking lot of a shopping center on River Road. Mohamed Konate, 27, was charged with attempted murder following the shootout, which injured Tjay and Boyd. Konate was also shot during the encounter and was arrested at a New York City hospital hours later. Police did not say who shot Konate.

According to the affidavit of probable cause, one of the victims told police that Konate approached the red Dodge Durango that Tjay, Boyd and Valdez were in, pointed a gun at them and demanded they hand over their jewelry. A shootout followed. A witness said Konate was hit by gunfire and then dragged into a white BMW that was driven by an unidentified alleged co-conspirator, according the affidavit.

The Record and NorthJersey.com obtained six 911 call recordings regarding the shooting through a public records request. Though it's not clear the order in which the calls were made, each provides a different perspective of the shooting and the immediate aftermath, both from up close and afar. One seemingly came from one of the occupants of the Durango, though it's not clear if it came from Tjay, Boyd or Valdez. 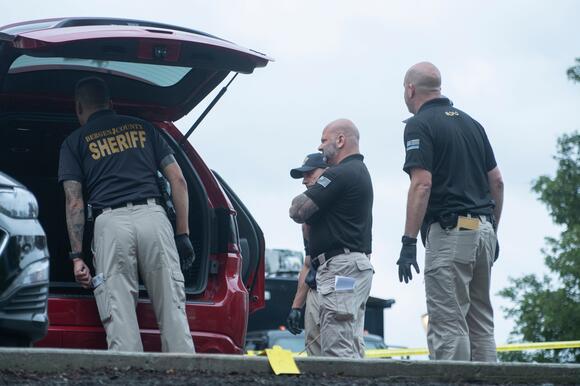 The shooting happened outside a Chipotle and The Vitamin Shoppe, part of City Place at The Promenade, a mixed-use development on a former Hudson River industrial site with stores and restaurants on the first floor and five stories of high-end condominiums above.

A 911 call made by a resident of The Metropolitan, an apartment complex across the street from City Place, appeared to be among the first. The man told the dispatcher that there was a shooting at the Chipotle across the street and that a car was driving away from the scene.

As the dispatcher notified police about the report, a clue that it might have been the first call made, the man continued to calmly report, in detail, what he saw from his window.

"There's a white BMW going toward the George Washington Bridge right now," he said. "He's put somebody that was shot in his car. There's another car that's in the parking lot right now, a Durango. There's people running inside the parking lot on the bottom. People are just scattering. People are going crazy."

The man described the make, model and approximate years of both the BMW and the Durango.

The man told the dispatcher there were people "going crazy" in the parking lot and running on River Road. During this call, a Bergen County dispatcher informed the Edgewater dispatcher, who were both on the line, that another call had come in regarding the shooting, confirming that someone was shot.

At this point, according to the Metropolitan resident's account to the dispatcher, police were not yet in the City Place parking lot but had seemingly gone down River Road in pursuit of the BMW.

"This is crazy," the man said. "I just moved into this area."

At some point, a second 911 call came from The Metropolitan, from a man who said he was a retired police officer. The dispatcher told him they had received calls about a shooting. The former cop described cars driving away and guessed that someone was likely hurt.

Around the corner from the Chipotle is a Homewood Suites hotel. Two hotel employees also called 911, seemingly from the parking lot. One of them, a woman, called 911 yelling: "Oh my God, can you please come to the Homewood Suites in Edgewater, please, someone just got shot."

"Is this by the Chipotle? We have officers going there," the dispatcher replied, indicating that other 911 calls had already come in.

The woman urged police to hurry. The dispatcher asked where the shooter was, and the employee said she didn't know.

"I'm outside, is it OK if I go inside? Because I'm a little scared," the woman asked the dispatcher.

Later on in the call, she said that the victim was a guest at the hotel, adding that someone had come into the hotel telling her to call the cops. During the chaotic call, screaming could be heard in the background.

Another hotel employee, a man, called 911 from the parking lot. The dispatcher asked the man if he knew who the victim was. 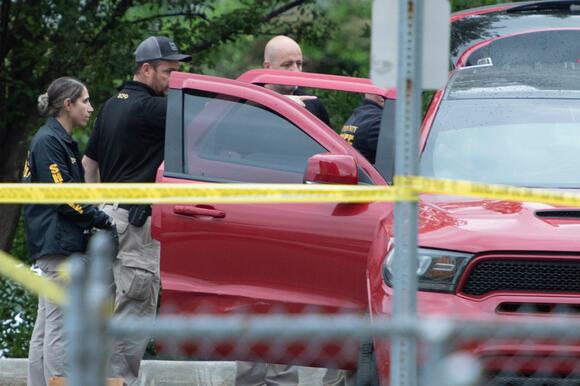 He then identified the victim as Lil Tjay.

The man can also be heard talking to others, reassuring them that police were on the way and telling them to "leave him alone," at one point telling someone not to "move him," likely referring to Tjay, who he said was still in the Durango.

"Is he still breathing?" asked the dispatcher.

"He's still breathing, but only a little," the man said. "I need paramedics."

Around the same time, another call came in from a City Place security guard, who said one of the victims was in the back of his car with a gunshot wound.

The security guard told a dispatcher that he had been sitting in his car when a man, likely Boyd, knocked on his window and got in the car. The guard drove away from the scene and parked outside a 7-Eleven down the street from City Place on River Road.

"I need cops at the 7-Eleven on River Road, the person shot is in the car," the dispatcher alerted police during the call. The guard said he turned on the lights in his security vehicle so police could find it.

The wounded man in the backseat can faintly be heard talking in the background. The guard told the dispatcher that the man was on the phone with his mother.

"Tell your mom I'm on the phone with [the police] right now," the guard said. 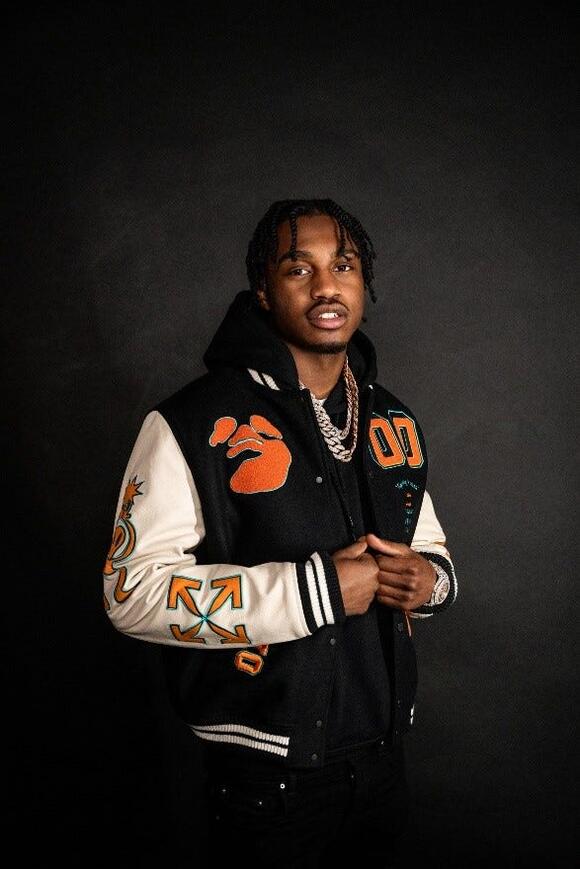 The guard then described how the man got in his car.

"I was in my car, about to eat my [inaudible], and all I heard was 'pop, pop, pop," the guard said. "I didn't think nothing of it and then I see him running to like an open field we have back here. He comes through the grass, comes in my car. He says, 'I just got shot.' So I left. He said don't go over there, so I didn't want to go over [toward the crime scene]. So I just came [to 7-Eleven] and parked here."

The guard stayed on the phone with the dispatcher for over six minutes until police showed up. During the remainder of the call, the guard can be heard telling the victim to stay in the car, while the dispatcher told the guard to help the victim keep pressure on the wound and elevate his legs.

Tjay suffered severe injuries, and at one point was in serious condition, according to the Bergen County Prosecutor's Office.

TMZ reported on June 30 that Tjay was awake and alert, having had a breathing tube removed. Boyd's injuries were less severe, and he and Valdez were arrested just hours after the shooting and charged with unlawful weapon possession. Both were released from custody.

Tjay's lawyer did not immediately respond to a request for comment regarding Tjay's current condition.

Tjay has 7 million followers on Instagram and has released two studio albums through Columbia Records that each charted in the top five on the Billboard 200. His 2021 song with singer 6LACK "Calling My Phone" debuted at number three on the Billboard Hot 100.

This article originally appeared on NorthJersey.com: 'This is crazy': 911 callers describe chaotic scene after Lil Tjay shooting in Edgewater