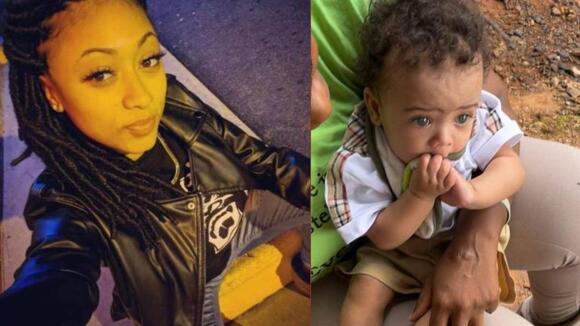 COBB COUNTY, Ga. — A man accused of killing two people and injuring a third at a Cobb County apartment complex is now in custody.

“They keep asking me, ‘Where Mommy at?’” Evans said. “Now I got to figure out how to tell these kids. I haven’t even told them that their mom is gone.”

“She had a great heart,” Evans said. “I want the community to remember her as being the person that I got engaged to.”

Wolfe didn’t live at the apartment complex where she died, and it’s not clear why she was there. But her neighbors are focused on caring for her children.

Monica Delancey, who is a community leader in Riverside, said Wolfe was someone who had support, friends, and people who loved her.

Delaney said Wolfe’s death is indicative of the larger problem of violence against Black women.

Wolfe’s community gathered Tuesday night for a vigil where they also collected diapers, clothes and food for the children.

May there soul rest in peace and May God provided for those kids. pls stay away from any kind or form of trouble. stay away from anything concerning hood life, especially if you love your kids. if not, the circle will repeat itself.

GWINNETT COUNTY, Ga — Gwinnett County police have identified the man they say was shot to death at an auto body shop in Gwinnett County. Police said Jermaine Brown, 36, of Lawrenceville, was the man who died in the Monday night incident. The shooting occurred on Stone Mountain Highway...
GWINNETT COUNTY, GA・15 HOURS AGO
WSB Channel 2 Atlanta

ROSWELL, Ga. — A Roswell mother is being remembered after police say she was struck and killed while on a morning jog. It happened outside of a Roswell fire station on the corner of Market Boulevard and Old Alabama Road on July 13, 2022. Police say a Roswell firefighter was behind the wheel.
ROSWELL, GA・4 HOURS AGO
WSB Channel 2 Atlanta

ATLANTA — The family of a 78-year-old woman killed in March in a Buckhead parking deck are speaking out because there still has not been an indictment in the crime. 78-year-old great-grandmother and former Douglas County Sheriff’s Deputy Jacqueline Mixon was attacked on March 1 in the Piedmont Hospital parking deck.
ATLANTA, GA・1 DAY AGO
WSB Channel 2 Atlanta

1 dead after crash involving tractor-trailer on I-285, police say

GWINNETT COUNTY, Ga. — The third and final suspect wanted in connection to the murder of a beloved coach who had gone to a gas station to pump air into his tires has been arrested. [DOWNLOAD: Free WSB-TV News app for alerts as news breaks]. Gwinnett County police said...
GWINNETT COUNTY, GA・1 DAY AGO

Man seriously injured after being hit by a car in Marietta, police say

MARIETTA, Ga. — A man suffered serious injuries on Friday morning when he was hit by a car, Marietta police say. Officers say the crash happened at the intersection of North Marietta Pkwy. and Fairground St. before sunrise. [DOWNLOAD: Free WSB-TV News app for alerts as news breaks]. The...
MARIETTA, GA・1 DAY AGO
WSB Channel 2 Atlanta

CLAYTON COUNTY, Ga. — A family went around a neighborhood looking for answers Saturday tonight . They told Channel 2′s Veronica Griffin it was their relative who had been found dead outside an apartment complex in Clayton County. Channel 2 Action News first brought you to the scene...
CLAYTON COUNTY, GA・4 HOURS AGO

Georgia woman arrested after 30,000 prescription pills found in the mail

CLAYTON COUNTY, Ga. — Clayton County police are investigating an incident in the parking lot of an apartment complex in Morrow. Officers were called to the Regal Forest Apartments on Trammell Road on Wednesday. Get the latest updates online and on air on Channel 2 Action News starting at...
CLAYTON COUNTY, GA・2 DAYS AGO
WSB Channel 2 Atlanta

GRIFFIN, Ga. — A Georgia man has been sentenced to 80 years in prison after he was convicted of kidnapping his girlfriend, stabbing her, burying her and ultimately trying to burn down a home with her inside. Prosecutors said Lydell Eugene Holmes, 39, pleaded guilty Tuesday to charges of...
PIKE COUNTY, GA・2 DAYS AGO
WSB Channel 2 Atlanta

ATLANTA — A woman was seriously injured after falling off a scooter. She says she then waited more than an hour for an ambulance that never showed up. Summer Turner says she was on a scooter, riding along the beltline, when someone cut in front of her, causing her to fall off and hit her head.
ATLANTA, GA・1 DAY AGO

Police: Woman loses $10,000 after being scammed at Perimeter Mall

DEKALB COUNTY, Ga — A woman was scammed out of $10,000 as part of a scheme that took place at a metro Atlanta mall, according to the Dunwoody Police Department. Police say a woman at Perimeter Mall was approached by another woman who said she was playing a card game for money and needed her as a witness so that she ”would not be taken advantage of.”
DUNWOODY, GA・2 DAYS AGO
WSB Channel 2 Atlanta

DEKALB COUNTY, Ga — After five years of torment, Eugenia Terrell says she’s finally found some peace. Terrell was in the courtroom on Friday when the man convicted of killing her daughter was sentenced to life in prison. “That’s just the end of it,” said Terrell. “We don’t...
DEKALB COUNTY, GA・1 DAY AGO
WSB Channel 2 Atlanta

ATLANTA — Two homes were engulfed in flames early Friday morning. At 5:24 a.m., Atlanta Fire and Rescue Department was called out to the 200 block of Martha Avenue about a house fire. [DOWNLOAD: Free WSB-TV News app for alerts as news breaks]. When they got to the scene,...
ATLANTA, GA・1 DAY AGO