The latest chapter in a season of renewed strength and relevance for FC Cincinnati in Major League Soccer is the confirmation of Luciano Acosta the first MLS All-Star in club history.

Acosta, 28, was named to his first MLS All-Star team for this season's 10-assist, six-goal contribution to a surprising FC Cincinnati turnaround that has the club battling for the playoffs.

More: 'That wasn't a soccer game.' FC Cincinnati sounds off on referees after 1-1 tie with New York Red Bulls

The 10 assists matches his output in that category from last season (31 appearances). He's also just one goal shy of matching his 2021 output of seven.

Those stats have lodged Acosta firmly in the Most Valuable Player debate as of midseason, but for now he'll claim a permanent place in FC Cincinnati lore as the club's first-ever All-Star. 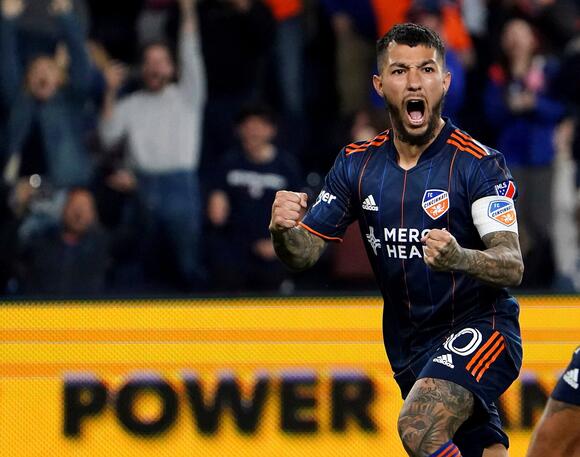 “First thought is that I am very happy to be an MLS All-Star and represent FCC" Acosta said in a team news release, "and second is thanks to my family and my teammates who always support me and give me strength, this is for and because of them, and I will represent Cincy as it deserves.”

The MLS All-Star roster was selected through a combination of fan, player, and media voting (12 players), designations by All-Star head coach Adrian Heath of host club Minnesota United FC (12 players), and a pair of selections by MLS Commissioner Don Garber.

The Enquirer participated in the media portion of the voting process.

This year's All-Star game will be staged Aug. 10 in St. Paul, Minnesota at Allianz Field, home of Minnesota United FC.

Like last year, the format of the game will pit the MLS All-Stars against a team of Liga MX All-Stars representing Mexican's top-flight soccer league.

Liga MX announced the first 14 of representatives for the All-Star Game in June, a group headlined by Tigres' André-Pierre Gignac and six players from Atlas FC, the Guadalajara, Jalisco-based club.

In joining FC Cincinnati prior to the 2021 season, Acosta completed a transfer from Atlas FC. Acosta landed at Atlas following four seasons at D.C. United of MLS, where he was named to the end-of-season MLS Best XI in 2018 but didn't receive All-Star recognition.

Alvaro Barreal sat deep in his locker, back against the wall and feet up. His face was obscured from view, and that was likely by design. Fully dressed in street clothes, FC Cincinnati captain Luciano Acosta sat on the edge of his locker room stall, head in hands and, at one moment, rubbing his eyes. Veteran center back Geoff Cameron, too, remained nestled in his stall long after the final whistle, slowly dismantling his assortment of...
CINCINNATI, OH・1 DAY AGO
Cincinnati.com | The Enquirer

Months of unbeaten soccer and almost a full season of defying expectations has led FC Cincinnati to the brink of clinching its first postseason berth in Major League Soccer. By the end of the weekend, FCC could have its postseason ticket booked, but it will need some help to get there. FC Cincinnati hosts Chicago Fire FC Saturday at TQL Stadium (7:30 p.m.) to mark the regular-season home finale, and the club is eager to clinch its...
CINCINNATI, OH・2 DAYS AGO