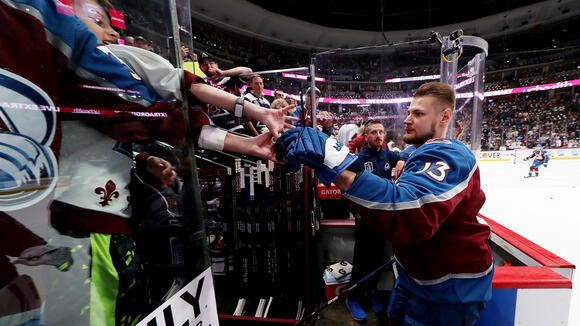 Forward Valeri Nichushkin is staying put with the Stanley Cup champion Avalanche. He signed an eight-year, $49 million contract with Colorado. He spent the past three years with the Avs and is coming off a season in which he had a career-best 25 goals and 52 points in 62 games in the regular season before adding nine and six in the playoffs.

Nichushkin's signing overshadowed several other roster-related developments on Monday, with teams having until the afternoon to determine whether to issue qualifying offers and retain the rights to their restricted free agents.

One of those decisions involved the Avalanche, with forward Nicolas Aube-Kubel going from celebrating with the Stanley Cup on Saturday to not receiving a qualifying offer from Colorado.

Aube-Kubel, 26, has four seasons of NHL experience and was claimed by Colorado after being waived by the Philadelphia Flyers in November. He had 11 goals and 22 points in 67 regular-season games for the Avalanche, and had no points in 14 playoff games.

Romi's career at CBS News Colorado started by covering the Denver Broncos on CBS Colorado Mornings on a part-time basis. She used the experience to learn as much as she could about anchoring sportscasts, telling compelling stories, and connecting with the Colorado community. After two years of working mornings part-time, Romi landed a full-time position as the Weekend Sports Anchor in 2018. In January 2023, Romi was named CBS Colorado's lead Sports Anchor. She is the first woman to be named a main sports anchor in Denver TV history."This is a responsibility I do not take lightly. So many incredible...
DENVER, CO・2 DAYS AGO
CBS Denver

Former All-Star center fielder Dexter Fowler is calling it a career after 14 years in the big leagues. Fowler made the announcement on Tuesday via social media.The Colorado Rockies drafted Fowler in the 14th round in 2004 out of Milton High School in Georgia. Four years later, he became a mainstay in the Majors, finishing 8th in Rookie of the Year voting in 2008. Fowler spent the first six years of his career in Colorado. He went on to play one year in Houston, two with the Chicago Cubs, four in St. Louis, and one with the Angels.Fowler will be...
DENVER, CO・2 DAYS AGO