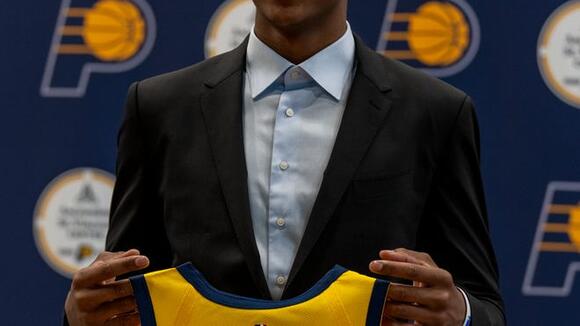 LAS VEGAS — Pacers guard Gabe York caught the ball on the left wing, took two dribbles and raised up for a deep step-back 3 in the closing seconds of the third quarter during Sunday's Summer League game against the Kings.

The shot went in all net, giving Indiana a one-point lead heading into the final frame.

As York jogged down the sideline past a few celebrities, including rapper 50 Cent, the 6-3 guard dapped up his teammates Tyrese Haliburton and Oshae Brissett, who stood up from their courtside seats after York wowed the crowd at Cox Pavilion.

The Pacers went on to lose the back-and-forth contest, 103-96, but for Indiana's second straight Summer League game, Brissett and Haliburton were in attendance. Both players are a part of the team's young core but took different paths to get there, and it's reflected in their contracts.

Haliburton was a 2020 lottery pick and after being acquired in a trade with the Kings last season for two-time All-Star Domantas Sabonis, Haliburton becomes eligible for the rookie max contract extension next summer.

Brissett went undrafted in 2019 and worked his way into the NBA, playing first for the Raptors and now the Pacers. He signed a two-year deal with Indiana last year with a team option for the second season. After outplaying his contract in 2021-22, the Pacers could've declined their team option, made Brissett a restricted free agent this summer and negotiated a long-term deal with the 24-year-old swingman. However, since Indiana picked up its team option, Brissett will play for $1.8 million — below his market value — and become an unrestricted free agent next summer.

I spoke to Brissett at Summer League about his contract, bond with Haliburton, Jalen Smith returnining, being the elder Canadian, budding rap career (just keep reading) and more:

Question: The Pacers picked up their team option for you, so how do you feel about going into the final year of your contract?

Q: Does a part of you wish the Pacers would've declined their team option and negotiated a long-term deal with you this summer?

A: Man, I'm blessed. I always give thanks and I'm always appreciative of our front office. They believed in me when no one else did, so whatever they had on the table I was really ready (to accept) and come back and give it my all for this year. I want to be here long term, so I know next year, whatever happens, Indiana's always gonna be my No. 1 option to be back. The fans and the team have welcomed me with open arms and I'll never forget that.

Q: What things have you worked on this summer? And what role do you envision yourself having heading into your fourth season?

A: I want our team to really rely on me on defense. I want to be our main on-ball defender. That's something I've really been working on, watching film, learning the game more and getting a lot stronger. And then really every aspect of my game. I know that with the way that we play, I'm never gonna be pigeonholed into doing one thing. Coach (Rick Carlisle) will want me to be all over the place and I'm ready for that. So I'm really working on everything, but I've really been focusing on defense.

Q: I've noticed through social media that you, Tyrese and Duane Washington Jr. have been training and hanging out together this summer. How has your bond with them grown since last season ended?

A: Like I said, we have a lot of guys who really want to win and that starts off the court. You mentioned Duane, he's one of the main locker room guys that we have. He's really been the one that's been tying us together, keeping us together in the group chat and just being that great locker room guy that every team needs. So that helps with our chemistry on the court, and I know going into training camp we're gonna be better because of it moving forward.

Q: The Malcolm Brogdon trade was announced Saturday, so now that he's off to Boston, that opens the door even more for Tyrese in Indiana. How do you think he'll handle his increased role as a franchise cornerstone?

A: He's ready. This is what he would've been over there in Sac, and I'm just glad that we got him here and I know everyone else is glad about it. So I know he's ready. I know he's working his butt off to get going and to lead us next year.

Q: What did you say to Jalen Smith to make him want to come back and be a part of this youth movement?

Q: What's been your impression of fellow Canadian and No. 6 pick Bennedict Mathurin so far?

A: Man, he's hoopin', he's hoopin'. I know that he's just gonna keep on getting better and just keep building and keep growing. I'm just excited to see what he can be.

Q: With you, Bennedict and another rookie draft pick, Andrew Nembhard, all being from up North, is this officially the Canadian Pacers? And are you the ambassador?

A: As long as they know I'm still the top Canadian. I was the first one here and I'm the oldest, so with that being said I'mma show them the way and lead them. But yes, we're the Canadian Pacers for sure.

Q: I just subscribed to your YouTube channel, BrissyTV, and in the latest episode you mentioned making a rap song when the COVID-19 pandemic started and we were all stuck inside. Tyrese asked you to drop the track, but you refused, so are we ever going to here this song?

A: No! Never! (Brissett says laughing) It's in the archives. That has never been released. I didn't want anyone to even know about it, so I'm kind of mad they put that in the vlog. But it'll never be released, never!

After missing three games with a knee injury, Butler center Manny Bates returned to the lineup against Providence. The Bulldogs looked better with their star center early, but the usual offensive droughts, turnovers and poor interior defense continued to plague them. Providence took control of the game in the first half and never looked back, cruising to a 79-58 win. ...
INDIANAPOLIS, IN・2 DAYS AGO
FastBreak on FanNation

KANSAS CITY, Mo. — Most great athletes are motivated by something bigger than themselves. Their drive may come from an array of different things — money, fame, disrespect, upbringing, family, survival. The source of Isiah Pacheco’s drive is as unmistakable as it is unbreakable. The 23-year-old Chiefs rookie running back, who got to Kansas City and the AFC Championship game Sunday against the Bengals at Arrowhead Stadium by way of rural Vineland, N.J., and Rutgers, is driven by family tragedy. Pacheco’s youth was forever scarred by the loss of his brother and sister to murder in a span of less than two years when...
KANSAS CITY, MO・42 MINUTES AGO
IndyStar | The Indianapolis Star

Babyface will perform at the Super Bowl The Indianapolis native, who's won multiple Grammy Awards, will sing "America the Beautiful." And he's in famous company for the pregame festivities. ...
INDIANAPOLIS, IN・2 DAYS AGO
IndyStar | The Indianapolis Star

He once threw his wrestling gear away. Now, Kyrel Leavell is a state champ, eyeing more.

Before Kyrel Leavell was a state champion wrestler at Warren Central, he was a kid ready to give up on the sport. Leavell laughs at the memory now, but it was not humorous at the time. He was a sixth grader, wrestling at a national tournament in Pennsylvania. He was losing match after match. That younger version of Kyrel was talented, but did not yet possess the will and desire to match.
INDIANA STATE・20 HOURS AGO
IndyStar | The Indianapolis Star

IndyStar insiders Joel A. Erickson and Nate Atkins break down the reaction of Colts fans to the possibility of a Jeff Saturday hiring, the reaction of the front office, Frank Reich’s hiring in Carolina and the long list of candidates coming in for a second interview. This article originally appeared on Indianapolis Star: Colts Cover-2 Podcast: Coaching search moves to round 2
INDIANAPOLIS, IN・1 DAY AGO