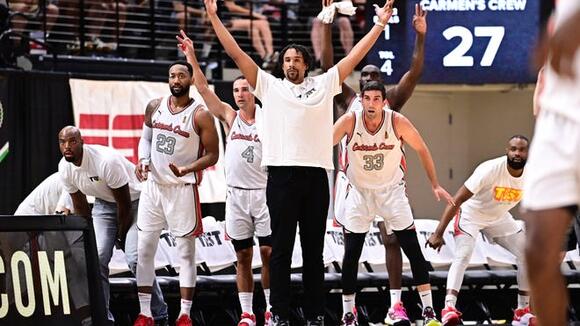 A lot can change in three years.

Inside Chicago’s Wintrust Arena, the members of Carmen’s Crew were celebrating both a title and a payday. The team comprised primarily of former Ohio State men’s basketball players had just taken home its first The Basketball Tournament championship and, with it, the $2 million winner-take-all check. It was 2019.

This weekend, TBT returns with a $1 million prize for the winner of the 64-team event. But for the first time since 2017, the unofficial Ohio State alumni team won’t be participating. In a social media post made June 7, coach Jared Sullinger announced that the Buckeyes would not be fielding a team and encouraged their fans to support the event at its regional sites.

After playing in Sunday’s Kingdom Summer League at Ohio Dominican University, Sullinger said they were scrambling to finalize a roster before realizing they would have to turn their focus ahead a year.

“We have a lot of guys that was playing a lot of minutes overseas and at the time we was scrambling to try to get enough guys to make a full roster and we couldn’t do it at the moment,” Sullinger said. “We’re going to expand our time and look forward to the next year.”

Carmen’s Crew suffered a first-round upset in the 2020 tournament, which was the first major basketball event to be staged since the COVID-19 pandemic. In 2021, Ohio State’s Covelli Center served as a host site but the No. 1 seeded team of Buckeyes was upset by No. 5 seed The Money Crew in the regional semifinal.

Now, the plan is to return in 2023 but potentially with a different-looking roster.

“We’re going to try to get younger,” Sullinger said. “It’s not really hard (to find new guys) when you’ve got (Ohio State coach Chris) Holtmann bringing in pros every day. You’ve got to give credit to Holtmann. As long as he keeps getting pros and they do all four years and they want to play TBT then they’ve got an open door to us.”

Sullinger joked that pretty soon he’d be kicking David Lighty and William Buford, Ohio State stars who are older than him, “out the (dang) door” in favor of new blood. Buford suffered a knee injury while playing in Germany and would’ve been unavailable this summer.

After playing for the Buckeyes during the 2018-19 season, Keyshawn Woods made his inaugural appearance for Carmen’s Crew last summer. Like Sullinger, he’s playing in this summer’s Kingdom Summer League event.

Woods spent part of the 2021-22 season recovering from injury before signing to play first in Greece and then Turkey to close out the year. He chose not to participate in this year’s TBT.

“I’m honestly not mad,” he said. “I could’ve played. I had a chance to play, but I just wanted to really work on my game and get in shape this summer and honestly spend a lot of time with my family. I’ve been away, so this really gave me a chance to be with my family too.

Few things happen in a vacuum. There is usually history, context and circumstance. For the most memorable play in Ohio State’s 49-10 victory over Rutgers on Saturday, there is plenty. A...
COLUMBUS, OH・2 DAYS AGO
The Columbus Dispatch

Have more comments, questions? Reach out to me at bwhite1@dispatch.com. Hey Brian: I finally agree with Lebron James on something. The Ohio State black uniforms are sick. Oh wait, I thought he said, "make me sick." Why OSU continues to mothball one of the most iconic looks in all of sports for big games is alternately frustrating and maddening. Do the "kids" really like them all that much? If they're so great, then why not just make the switch and wear them all the time? Because they are not so great. It's all really about the Nike money.
COLUMBUS, OH・2 DAYS AGO
The Columbus Dispatch

Crew fans know as well as anybody that politics, sports can't be separated | Michael Arace

The Crew’s home finale ended on a twisted note Saturday night, when the most frustrating team in MLS suddenly reversed form. Derrick Etienne Jr. potted two late goals, the second one in stoppage time, and the Crew beat the New York Red Bulls 2-1 in Lower.com Field. It was unexpected. It was stunning. Is it too little, too late, at the end of a regular season when a great mass of their most strident fans has been...
COLUMBUS, OH・21 HOURS AGO
The Columbus Dispatch

It’s almost time for the Blue Jackets to make a slew of roster decisions. Starting the final week of the preseason Monday, there were 57 players remaining in a training camp that started with 68, which is far above the NHL’s maximum of 23 for the regular season. A large roster trim is expected soon, followed by another cut after the final two preseason games Thursday against St. Louis and Saturday at Washington.
COLUMBUS, OH・1 DAY AGO

Looking for a way to improve her game, Charlotte Helm took part in the USA Water Polo Olympic Development Program at both the regional and national levels last spring. As one of four seniors on the Thomas Worthington girls team, the experience has made a difference for both Helm and the Cardinals.
SOCCER・1 DAY AGO
The Columbus Dispatch

Who was the best high school athlete in Greater Columbus last week? Your votes decide

Voting is open for the Athlete of the Week. Dispatch.com readers can now vote for their favorite high school athletes of the week on their desktop, the Dispatch.com mobile web or Dispatch app once per hour by scrolling down to ballots listed below. Deadline is 4 p.m. Friday. Columbus High...
COLUMBUS, OH・1 DAY AGO
The Columbus Dispatch

The sixth game of the Blue Jackets’ preseason slate was ugly.  Despite taking a brief 1-0 lead on a goal by Yegor Chinakhov, Columbus allowed eight unanswered goals by the Carolina Hurricanes in an 8-1 rout at PNC Arena in Raleigh.  Martin Necas led the way for Carolina (4-0-0) with two goals, two assists...
COLUMBUS, OH・19 HOURS AGO
The Columbus Dispatch

Colton Powers' last name matches his running style, as Dublin Jerome found out firsthand during its visit to Marysville on Sept. 30. The senior rushed for 175 yards and six touchdowns on 24 carries, helping the Monarchs power past the previously unbeaten Celtics 49-28. Powers scored on runs of 9, 19, 24, 2, 2 and 1 yard.
MARYSVILLE, OH・1 DAY AGO