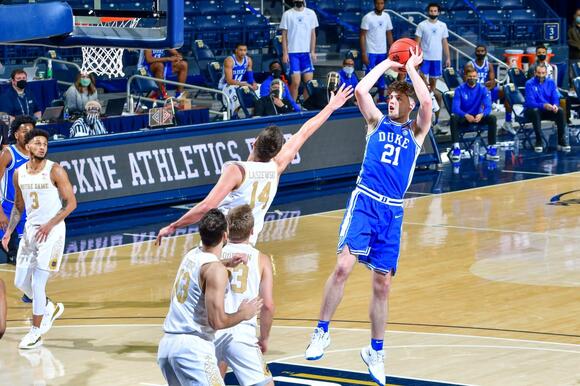 Recent draftees and other young players with top-level aspirations will be in Las Vegas for 11 days of action, July 7-17, at the annual NBA Summer League. According to Brett Siegel of Fastbreak, former Duke basketball stretch-four Matthew Hurt is on the list .

Hurt, who went undrafted in 2021 despite landing on the All-ACC First Team as a sophomore in Durham, will suit up for the Milwaukee Bucks.

Last season, the 6-foot-9, 235-pound former McDonald's All-American played eight games and drew three starts for the Memphis Hustle, the Memphis Grizzlies' G League affiliate. He averaged 12.1 points, 4.8 rebounds, and 1.1 blocks in 29.8 minutes per outing, shooting 43.0 percent from the field and 35.3 percent beyond the arc.

But Hurt's first pro campaign ended prematurely in December due to a torn meniscus in his knee, which he underwent surgery to repair in January. His father, Richard Hurt, suggested to Guy N. Limbeck of the Post Bulletin at the time that the season-ending setback couldn't have come at a more unfortunate time for the Minnesota native:

"He was just starting to play well, and the Grizzlies had been talking to him about bringing him up on a 10-day contract...It was just kind of bad timing."

For now, the 22-year-old Matthew Hurt is one of 10 former Blue Devils on a 2022 NBA Summer League roster. Here are the other nine:

Milwaukee and Matthew Hurt will take the floor for the first time on July 8 at 7 p.m. ET (NBA TV) against the Brooklyn Nets.

It can be argued that the off-court ventures of Los Angeles Lakers star LeBron James are just as successful if not more than what he has accomplished on the basketball court. And now he is teaming with a pair of NBA All-Stars for his latest. LRMR Ventures, the family office...
LOS ANGELES, CA・1 DAY AGO
BlueDevilCountry

Jesuit High School (Calif.) senior small forward and Duke basketball recruiting target Andrej Stojakovic plans to trim his list of suitors from six to four at an unspecified time on Wednesday, according to On3's Joe Tipton. While the Blue Devils landed in Stojakovic's top six, which he revealed in ...
DURHAM, NC・1 DAY AGO
BlueDevilCountry

Three 2025 preps hold Duke basketball recruiting offers. And all three sit in the top 15 among their peers, at least in the eyes of On3, which revealed its first ranking of the class on Monday. The top two prospects in the cycle, per On3, are prime Blue Devil targets in Montverde Academy (Fla.) ...
DURHAM, NC・2 DAYS AGO
BlueDevilCountry

At the Duke basketball preseason media day on Tuesday, freshman small forward Dariq Whitehead gave every indication of a smooth recovery-in-progress from a fracture in his right foot that he suffered and underwent surgery for in late August. All in all, Whitehead's comments and body language seemed ...
DURHAM, NC・1 DAY AGO

Until relatively recently, the Los Angeles Clippers didn’t sell out crowds, contend for titles, or routinely sit near the apex
LOS ANGELES, CA・1 HOUR AGO
BlueDevilCountry

Duke legend set to be on ESPN much more often

On Monday, ESPN announced via tweet that it signed Duke basketball alum JJ Redick to a multi-year extension. Plus, the network noted that the 38-year-old now has an expanded role, including as a regular analyst for NBA games and the draft while routinely appearing on First Take, Get Up, and ...
DURHAM, NC・2 DAYS AGO
BlueDevilCountry

Monday marked the first official day of practice for the 2022-23 Duke basketball team. And the program marked the occasion by posting the first Duke Blue Planet episode of the preseason to YouTube, providing an inside look at various happenings, both on and off the court, among the Blue Devils over ...
DURHAM, NC・2 DAYS AGO