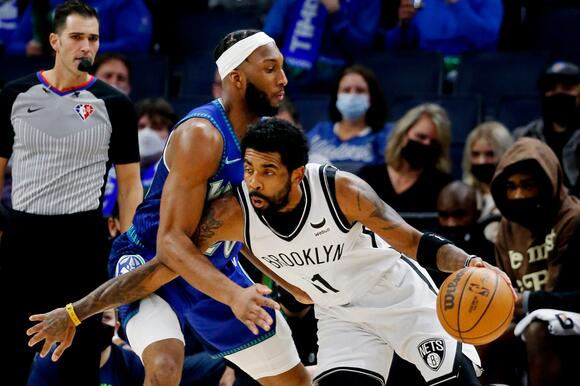 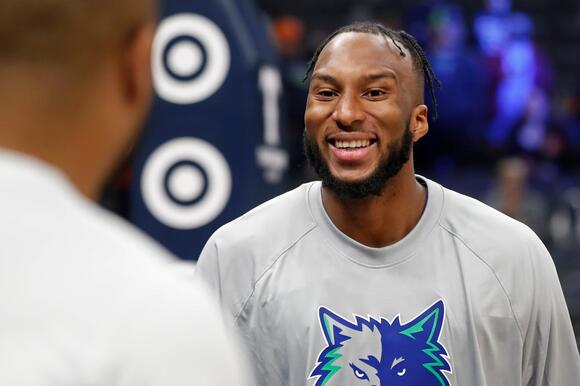 “I just want to be that Swiss Army knife every team needs,” Okogie said. “Defense. Energy. Shot making. A little spacing. Playmaking. Whatever the team needs.”

Okogie signed a one-year deal with the Suns after averaging 6.4 points in four NBA seasons with the Minnesota Timberwolves.

"I like the way they play basketball,” Okogie said Sunday at NBA Summer League in Las Vegas. “Winning organization. I just wanted to associate myself with that.”

Drafted 20th overall by Minnesota in the 2018 draft, the 6-4 guard out of Georgia Tech is known for his defensive ability, but he did average a career-high 8.6 points in his second NBA season.

“I can definitely have more of a role with my defensive presence,” Okogie said. “Whatever I can do to help them. I’m just really here to hopefully help them be the best team we can possibly be.”

Along with Okogie, the Suns have signed Damion Lee , re-signed Bismack Biyombo and acquired Jock Landale from Atlanta for cash considerations, but they’re far from done in free agency. 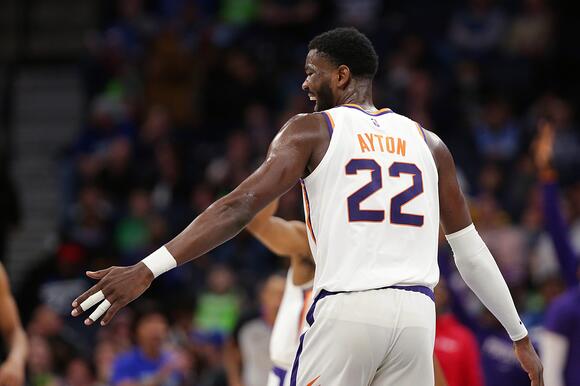 Kevin Durant requested a trade and put Phoenix and Miami atop his trade wish list while Deandre Ayton is a restricted free agent.

“It’ll be cool, it’ll be dope, but right now, everybody’s focus is on just trying to get better,” said Okogie when asked about seeing how the team’s roster shapes up heading into training camp. “When the chips fall, we’ll see where we’re at.”

How much are the Phoenix Suns and Mercury worth? If you have to ask, you can't afford it

Robert Sarver has announced his intention to sell the Phoenix Suns and Phoenix Mercury following a league-sanctioned report that found he was responsible for misogynistic and racially insensitive words and actions. This has sparked speculation on how much the teams (primarily the Suns) might fetch when a new buyer steps...
PHOENIX, AZ・2 DAYS AGO
AZCentral | The Arizona Republic

Some odds have been released for who could be the next owner of the Phoenix Suns and some big names are among the favorites. OddsShark released odds to replace Robert Sarver, who announced he was "seeking buyers" for the Suns and Phoenix Mercury on Wednesday, following backlash from the findings of an NBA investigation. The...
PHOENIX, AZ・2 DAYS AGO
AZCentral | The Arizona Republic

There are a lot of serious ideas out there for who could potentially buy the Phoenix Suns from Robert Sarver, who announced he was "seeking buyers" for the team and the Phoenix Mercury following backlash from the findings of an NBA investigation. There are also some not-so-serious, outside-the-box ideas. At least we think they...
PHOENIX, AZ・2 DAYS AGO
AZCentral | The Arizona Republic

Chris Paul usually calls Jae Crowder "9-9" as his Phoenix Suns teammate wears that unique jersey number. Crowder called himself the same thing quoting a tweet about training camp that suggests he'll be absent from it. "99 WONT BE THERE!" The Republic story that was tweeted, which he reacted to,...
PHOENIX, AZ・1 DAY AGO
AZCentral | The Arizona Republic

The Urban Meyer Arizona State football coaching speculation is back. Last month, Dan Patrick speculated that the ASU football team could be a team to "keep an eye on" for Meyer if the former Ohio State and Florida coach decided to get back into coaching (and if the Sun Devils fired Herm Edwards). ...
TEMPE, AZ・2 DAYS AGO
AZCentral | The Arizona Republic

Earlier in the month, when the Diamondbacks decided to shift to a six-man rotation, right-hander Merrill Kelly broached the topic of reaching the 200-inning plateau with his superiors. In Kelly’s mind, the number is a sort of representation of what he aspires to be as a starting pitcher. He hoped...
PHOENIX, AZ・3 HOURS AGO
AZCentral | The Arizona Republic

Fans scattered along Desert Financial Arena with hopes of seeing the Arizona State football team make the public walk to Sun Devil Stadium for the first time in years.  The statement was subtle, but noted by the public that interim head coach Shaun Aguano’s presence on ASU program has already marked a shift....
TEMPE, AZ・54 MINUTES AGO

In a show of solidarity, Sun Devil football players locked arms with interim coach Shaun Aguano as they took the field Saturday night to play Utah. It was a nice gesture. A better one would have been to play good football, but it’s becoming increasingly apparent that might be too much to ask of the Sun Devils this season. ...
TEMPE, AZ・59 MINUTES AGO
AZCentral | The Arizona Republic

Arizona State’s 34-13 loss to Utah at Sun Devil Stadium on Saturday makes an obvious and hugely controversial point: Ray Anderson needs to call Urban Meyer. ASU is in search of a new leader after the abrupt departure of Herm Edwards, and there’s pressure on Anderson to make a bold impression with the hire as major programs realign into lucrative super-conferences.    ...
TEMPE, AZ・1 HOUR AGO
AZCentral | The Arizona Republic

Carson Palmer still watches Arizona Cardinals games from his home in Idaho. He still follows his former team as closely as he can. On his occasional visits to the Phoenix area, he enjoys interacting with fans who recognize the former NFL quarterback wherever he is.  And Palmer, who was added to the Cardinals' Ring of Honor three years ago, will come back again if the team makes it to Super Bowl 57. The next Cardinals game he sees...
PHOENIX, AZ・1 DAY AGO
AZCentral | The Arizona Republic

When the COVID-19 pandemic caused the world to shut down in 2020, a lot of people found time to pick up a new hobby. Sara Gebhardt of Phoenix was one of them. She picked up a bow and arrow. ...
PHOENIX, AZ・11 HOURS AGO

The Arizona State football team is encouraging fans to wear black for its Pac-12 opener against Utah on Saturday night at Sun Devil Stadium. It's following suit with its uniform for the game against the Utes in Tempe. ASU football will wear black uniforms with gold jersey numbers and names, logos and helmets in...
TEMPE, AZ・1 DAY AGO
AZCentral | The Arizona Republic

Scottsdale Saguaro jumped out to a 14-0 lead Friday night, before Dylan Raiola, the nation's No. 1 2024 high school football prospect, hit Jaxon Branch with a deep TD pass. That started a 31-0 Chandler run. The Wolves' defense dominated the third quarter and made Saguaro use too much clock to try to rally in a 31-21 6A football victory before an overflow crowd at Chandler's Austin Field that avenged last year's 20-15 Open Division state championship loss...
SCOTTSDALE, AZ・1 DAY AGO
AZCentral | The Arizona Republic

Bad Bunny, soon to perform in Phoenix, a big hit with MLB players of diverse backgrounds

The live music tour of Benito Antonio Martínez Ocasio, better known as Bad Bunny, rolls through Phoenix at Chase Field next Wednesday.  It's the concert of the late summer in the city and its metro area. From kids and preteens to adults, many who are Latino but plenty of others who are not, the...
PHOENIX, AZ・1 DAY AGO

Late Friday night, long after Desert Mountain thought it had an easy rivalry win secured, Chaparral offered one final rebuttal. The Firebirds quarterback, Miles Vandenheuvel, rolled out right, set his feet just inside the 50-yard line and uncorked a prayer. With it carried the hopes of the most improbable comeback of the season in Arizona high school football.
SCOTTSDALE, AZ・1 DAY AGO
AZCentral | The Arizona Republic

Arizona State football coaching speculation continues to swirl and an interesting name is among the chatter. BYU coach Kalani Sitake. Some college football writers feel that the coach would be...
TEMPE, AZ・1 DAY AGO
AZCentral | The Arizona Republic