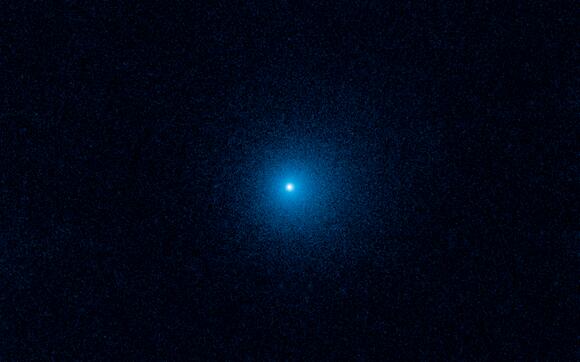 Hubble snapped images of K2 in 2017 when the frozen visitor was 1.5 billion miles from the Sun, just beyond Saturn's orbit. Even at that remote distance, sunlight is warming the frigid comet, producing an 80,000-mile-wide coma that envelops a tiny, solid nucleus. NASA/ESA/D. Jewitt (UCLA)

Skygazers will have an eventful night this coming Wednesday. An enormous comet is cruising through our solar system, which coincides with a so-called supermoon —the biggest and brightest view of a full moon in 2022. The comet, named C/2017 K2 (PanSTARRS) and nicknamed K2, is estimated to be about 18 to 100 miles wide . Astronomers from NASA expect it to make its closest approach towards Earth on July 13 with the most visibility on July 14.

The K2 comet was first detected through the Hubble Space Telescope in May 2017 between the orbits of Saturn and Uranus—about 2.4 billion kilometers from the sun. NASA reported it was the farthest they have seen a comet enter the solar system’s planetary zone. The K2 comet is believed to have originated from the Oort Cloud , a spherical layer of icy objects where the temperature reaches -440 degrees Fahrenheit. The Oort Cloud is located in the outermost region of our solar system.

NASA experts speculate most long-period comets—meteors that take more than 200 years to complete their orbit around the sun—come from the Oort Cloud. The city-sized comet of ice and dust may have been gravitationally expelled from the Oort Cloud, beginning a journey spanning millions of years that includes a passing visit to the Earth.

[Related: The biggest comet ever found is cruising through our solar system’s far reaches ]

Despite the comet’s massive size, it might be hard to spot at first. While it makes its closest approach to Earth on July 13, it will still be about two Earth-sun distances away. ” It would easily have been a naked-eye comet had it arrived half a year earlier or later,” Quanzhi Ye, an astronomer at the University of Maryland who specializes in comets, told Space.com .

For a first-hand look at K2, your best bet is to use a small telescope or binoculars. You’ll want to scan for a dim patch of light, which is likely the tail of the comet, at around 11 p.m. EDT on July 14.

Depending on which night you hunt for it, the comet will appear in different places in the sky. On July 14, it will seem to be located near the star cluster called Messier 10; by mid-August, it will be positioned as though it’s at the tip of the constellation Scorpius. (A stargazing app such as Stellarium can be a big help to find celestial objects on the move.)

The comet will remain viewable for people living in the Northern Hemisphere with a telescope until September as it makes its way toward the sun near the end of the year. A live-stream for the K2 comet will be available Thursday at 6:15 p.m. EDT.

The supermoon will also be visible the evening of July 13 through the morning of July 14. The Virtual Telescope Project is live-streaming the event starting at 3 p.m. EDT on Wednesday. Because the moon will appear at its brightest, without the right telescope, the dazzling light could make it hard to see fainter objects in the heavens like the K2 comet and summer stars .

Correction (July 12, 2022): On readers’ requests, this story has been updated to include additional information for locating K2. The times were also changed from EST to EDT.

I read an article where a man proclaiming to be a time traveler, said an earthquake would hit the New Madrid fault zone on the 14th and now I hear an asteroid comith on the same day. I think I'll sleep in that morning.

i would have been thankful for a tip where to look besides "the night sky."

When Voyager 1 goes dark, what comes next?

Voyager 1 and 2 launched 45 years ago and have seen the outer reaches of the our solar system. But their age prompts scientists to look to the future of space probe missions. NASA/JPL-CaltechNASA's 45-year-old probe is one of the farthest traveling crafts in space. But as Voyager shows its age, a new mission could seek to surpass it.
ASTRONOMY・10 DAYS AGO
Popular Science

The word astrobiology might conjure up images of aliens like the squeaky, claw-fearing aliens from the Toy Story franchise, Star Trek’s logical Vulcan Spock, or the hungry Grogu from The Mandalorian. But the first real signs of life and evolution in the universe will most likely come from microbes and rocks.
ASTRONOMY・9 DAYS AGO
Popular Science

Is it finally time for a permanent base on the moon?

'A manned base on the moon?' appeared in the April 1952 issue of Popular Science. Popular ScienceThe upcoming Artemis mission is NASA's initial step to create a lunar outpost—but are we really ready to establish long-term bases beyond Earth?
ASTRONOMY・4 DAYS AGO
Popular Science

The CHIME telescope in Canada. CHIMEThe origin of radio bursts like this one remain a vexing astronomical mystery.
ASTRONOMY・3 DAYS AGO

After the big bang, light and electricity shaped the early universe

As the James Webb Space Telescope peers far into space, it could dredge up clues to how early universes were shaped by atomic interactions. NASA, ESA, CSA, STScIFree-roaming atoms charged across newly formed galaxies, bringing us from cosmic dark to dawn.
ASTRONOMY・5 DAYS AGO
Popular Science

You’ve seen Mount Doom in the movies, now look at it from space

Craters formed on September 5, 2021 by a meteoroid on Mars. NASA/JPLThis is InSight’s first detection of impacts since landing on Mars in 2018.
ASTRONOMY・4 DAYS AGO
Popular Science

The autumnal equinox is upon us, and vibrant falling leaves aren’t the only things returning to our skies. The aurora borealis, a.k.a. the northern lights, will begin to dazzle in high-latitude skies far more often. But why? Popular Science and UCLA space science professor Robert McPherron answer your questions.
ASTRONOMY・3 DAYS AGO

How many ants are there on Earth? Thousands of billions.

One of the estimated 20 quadrillion ants on Earth. Egor Kamelev/PexelsAll the ants on Earth weigh more than wild birds and mammals combined.
WILDLIFE・6 DAYS AGO
Popular Science

Termites work through wood faster when it’s hotter out

This 6-inch-long Jurassic creature does a great lizard impersonation

An artistic interpretation of Opisthiamimus gregori. Julius Csotonyi for the Smithsonian InstitutionThe fossils uncovered in Wyoming reveal an ancestor of the last remaining rhynchocephalian on Earth.
WILDLIFE・9 DAYS AGO

There’s too much garbage on Mars

Rovers on Mars frequently come across debris–like this heat shield and spring–from their own or other missions. NASA/JPL-CaltechMars is littered with 15,694 pounds of human trash from 50 years of robotic exploration.
ASTRONOMY・4 DAYS AGO
Popular Science

This fall, use weather data to see when birds are migrating near you

Millions of birds migrate overhead at night in the US. If you know when and where to look, you can catch the spectacle. Ryan Moehring / USFWSBirdCast's free online maps are like weather forecasts, but for avian migration.
PETS・2 DAYS AGO