Man found in parking lot after shots fired in Hillsboro 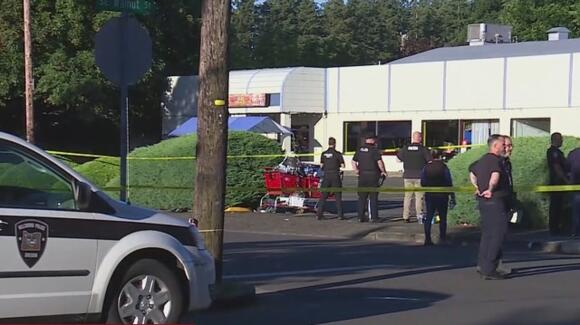 At around 12:20 a.m. Hillsboro police received reports of shots fired near SE 11th and Walnut.

Responding officers said they found a man about 40-years-old in a nearby parking lot. The man appeared to have died of a gunshot wound, according to officials.

Police said there is no suspect information at this time.

Hillsboro police commander Michael Rouches says officers pay a lot of attention to this area but the department is hoping for a more integrated approach when it comes to tackling crime.

“We are working with 10th Street businesses and city hall and community groups to see what changes we could make to that area that are more than having just cops drive by,” he said.

Walnut Street was shut down between 10th and 12th Avenue for 7 hours but has since reopened.

Suspect on the loose after fatally striking pedestrian in NE Portland

A hit-and-run in Northeast Portland late Thursday night was deadly.
PORTLAND, OR・13 HOURS AGO
KOIN 6 News

The Multnomah County Sherriff's Office on Friday released the name of the man shot to death in Fairview Tuesday night.
FAIRVIEW, OR・6 HOURS AGO
KOIN 6 News

Residents of a Southwest Portland apartment building were evacuated early Friday morning after a woman living there intentionally ignited a fire outside their door, according to fire investigators.
PORTLAND, OR・7 HOURS AGO
KOIN 6 News

A shooting in Salem left one person with life-threatening injuries late Thursday night, authorities said.
SALEM, OR・3 HOURS AGO

The victim's name in a deadly hit-and-run Wednesday has been revealed by Salem PD.
SALEM, OR・8 HOURS AGO
KOIN 6 News

Victim shows up at hospital after Hazelwood neighborhood shooting

Detectives are investigating a shooting in Hazelwood Friday morning after authorities say the victim showed up at a local hospital.
PORTLAND, OR・10 HOURS AGO
KOIN 6 News

Authorities are searching for a suspect after a strong-armed robbery on Wednesday in the Vancouver Mall parking lot.
VANCOUVER, WA・23 HOURS AGO
KOIN 6 News

1 dead after stabbing in Old Town on Burnside Blvd

Portland Police confirm one person is dead after a reported stabbing on Burnside Boulevard.
PORTLAND, OR・4 HOURS AGO

A sedan slammed into the side of a Beaverton school bus Thursday morning, the Washington County Sheriff's Office tweeted.
BEAVERTON, OR・1 DAY AGO
KOIN 6 News

The suspect in a shooting that left one person dead at a house in Fairview remains on the loose Tuesday night, the Multnomah County Sheriff's Office said.
FAIRVIEW, OR・2 DAYS AGO
KOIN 6 News

One man died and another was arrested after a wrong-way crash on Interstate 5 early Friday.
WILSONVILLE, OR・2 HOURS AGO
KOIN 6 News

A man accused of smashing several windows in Portland this week is back on the streets after there was no public defender to represent him, according to the District Attorney's Office.
PORTLAND, OR・2 HOURS AGO

A driver allegedly hit a power pole Friday morning which caused more than 3,500 homes in Gearhart and Seaside to lose power.
SEASIDE, OR・9 HOURS AGO
KOIN 6 News

Authorities are searching for a suspect who reportedly fired a gun at a McDonald's drive-thru window early Thursday morning, according to the Vancouver Police Deaprtment.
VANCOUVER, WA・1 DAY AGO
KOIN 6 News

The man suspected of killing a person in Fairview Tuesday was arrested after authorities say he re-entered the home where the shooting happened.
FAIRVIEW, OR・2 DAYS AGO
KOIN 6 News

A Salem woman called 911 Wednesday evening and secretly led Marion County officials to her and the man that allegedly kidnapped her.
MARION COUNTY, OR・8 HOURS AGO
KOIN 6 News

Two brothers were arrested Tuesday for a Salem shooting incident that happened in August.
SALEM, OR・1 DAY AGO
KOIN 6 News

The owners of King's Omelets don't want to close, but between repeated vandalism, rising insurance rates and inflation, Eric and Eva Liu tell KOIN 6 News that they can't go on.
PORTLAND, OR・2 HOURS AGO
KOIN 6 News

The Oregon Convention Center spires will glow red on Oct. 1, in honor of the firefighters who were killed in the line of duty during the past year as part of National Fallen Firefighters Memorial Weekend.
PORTLAND, OR・5 HOURS AGO
KOIN 6 News

A 66-year-old woman was hospitalized after a hit-and-run crash in Salem on Wednesday, according to the Salem Police Department.
SALEM, OR・2 DAYS AGO