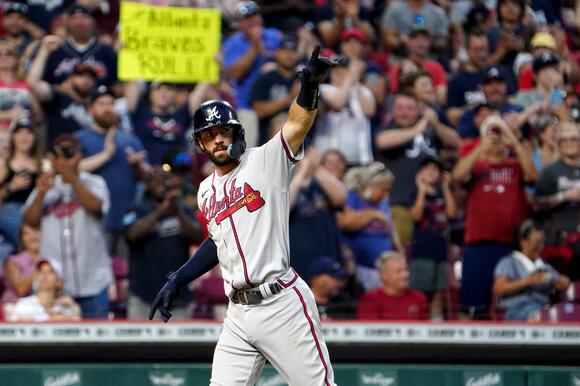 In the premiere of "The Other Side of the Glass," hosts Chris Thomas and Beau Morgan were left with a bad taste in their mouths after the announcement of the MLB All-Star starters. Mainly because Atlanta Braves shortstop Dansby Swanson did not get the start, but instead the Dodgers' Trea Turner did.

The hosts went on to compare the stats of each player to make their case that Swanson was snubbed of his deserved spot. Listing out that Swanson leads Turner in batting average, on-base percentage, and home runs.

Couple his offensive production with his defensive prowess and Swanson certainly has a case to be the starter.

"Dansby Swanson is to the Braves right now, what Freddie Freeman was for the last 10 years," Morgan said. "He's a leader."

When taking everything into account it does feel like another case of the bigger name in the bigger market, Turner, taking a spot from the more deserving player, Swanson.

Why Braves have a major advantage in showdown with Mets

92.9 The Game Atlanta Braves insider Grant McAuley joined Dukes and Bell for his regular appearance on the show and talked about what gives the Braves a major advantage over the Mets in their showdown for the division this weekend.
QUEENS, NY・2 DAYS AGO
92.9 The Game

Andy Bunker and Randy McMichael talked about how Jake Odorizzi does not need to be on the Atlanta Braves playoff roster after another tough outing - this one against the Washington Nationals.
MLB・1 DAY AGO
92.9 The Game

Is Austin Riley slumping at wrong time for the Braves?

92.9 The Game Atlanta Braves insider Grant McAuley joined Dukes and Bell for his regular appearance on the show and talked about has Austin Riley found himself in a slump at crucial time for the Braves?
MLB・1 DAY AGO
92.9 The Game

Pressure is on the Mets in series at Braves this weekend

Andy & Randy were joined by former Atlanta Braves pitcher and current Bally Sports Braves Analyst Paul Byrd who talked about this weekend’s hugely important series between the Braves and the New York Mets at Truist Park
QUEENS, NY・10 HOURS AGO

Aaron Judge didn't come close to hitting his 62nd home run, going 1 for 2 with a pair of walks as the Baltimore Orioles beat the New York Yankees 2-1
BALTIMORE, MD・8 MINUTES AGO