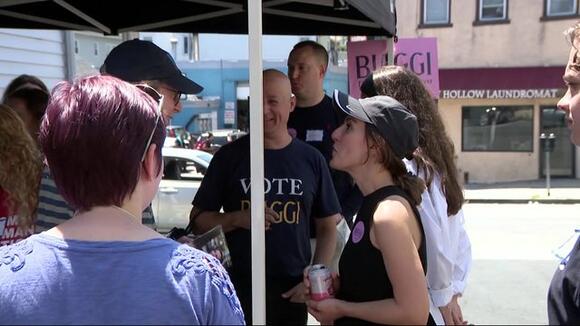 She was previously running for Congress in the 3rd District, but after state lines were redrawn and finalized to take portions of Westchester out of the district, she changed her course.

“Since I've been in office , not only do I think I have proven that I care about the issues that I said I would run on, but I have been a champion on those things,” Biaggi says . “My record proves that, and more and most importantly, I am not a corporate establishment Democrat or politician that will just do whatever the party says."

The primary election is scheduled for Aug. 23.

Police: Couple found dead in Yorktown home with over 125 cats

Many of the cats were taken from the home and brought to SPCA Westchester.
YORKTOWN, NY・2 DAYS AGO
News 12

Family reflects on life of Bridgeport woman who died of overdose

Sade Billie's family says they want to share their story to encourage people who are struggling with addiction — and their families — to get professional help.
BRIDGEPORT, CT・1 DAY AGO
News 12

Town of Montgomery police say several frightened spectators called 911 claiming someone had a gun and shots were fired, resulting in a multiagency response.
MONTGOMERY, NY・2 DAYS AGO
News 12

Police: No foul play suspected in death of couple in home with 125 cats

SPCA staff say that some of the 90 or so cats that came to them from the house have illnesses and parasites, but they are holding up well.
YORKTOWN, NY・1 DAY AGO
News 12

The standoff between migrants and the city heads was in its third day Wednesday as asylum seekers brace the cold outside the Watson Hotel in Hells Kitchen.
NEW YORK CITY, NY・2 DAYS AGO
News 12

Eunice Dwumfour, 30, was shot multiple times outside of her apartment complex. Officials say that a man was seen shooting Dwumfour and then running away and jumping a fence.
SAYREVILLE, NJ・1 DAY AGO
News 12

Police say the truck was traveling illegally on the parkway in Scarsdale when it hit the Mamaroneck Road overpass around 7 a.m.
SCARSDALE, NY・2 DAYS AGO
News 12

Both died from gunshot wounds with the medical examiner’s office ruling Traci Jones’ death a homicide and her estranged husband’s a suicide.
BETHEL, NY・2 DAYS AGO
News 12

The incident happened on Tuesday around 4:15 p.m. at the BP on Front Street.
UNIONDALE, NY・3 DAYS AGO
News 12

State police are asking witnesses to come forward after a crash in the town of Wallkill last weekend that killed Sara Williams - a mother and Orange County phlebotomist who just celebrated her 35th birthday.
WALLKILL, NY・15 HOURS AGO
News 12

The NYPD says two people were found shot to death in East Flatbush on Friday. Officers responded to 4722 Beverley Road just before 2 p.m. Police say a man and women were found with gunshot wounds to the head. Both were pronounced dead at the scene. The city's Medical Examiner...
BROOKLYN, NY・13 HOURS AGO
News 12

‘I live in constant fear.’ Bethel woman killed in murder-suicide had restraining order against husband

Traci Jones, 52, was granted a restraining order against her husband, Lester Jones, 56, on Jan. 24—one week before he allegedly shot her, then turned the gun on himself.
BETHEL, CT・1 DAY AGO
News 12

Rescuers tried to save the victim, but they died on the scene from their injuries.
NEWBURGH, NY・13 HOURS AGO
News 12

State police say an overturned garbage truck has closed all eastbound lanes on Route 17 in Goshen in the area of Exit 123 for Routes 6 and 17M.
GOSHEN, NY・3 DAYS AGO
News 12

When residents tell News 12 they have a pest problem, often times it relates to roaches and rodents. For this Concourse Village resident, the pest problem is much, much bigger.
BRONX, NY・2 DAYS AGO
News 12

Sayreville community in shock over shooting death of council member

Neighbors in a Sayreville community say they are shocked to find out a town council member was shot and killed outside of her home Wednesday evening. Council Member Eunice Dwumfour was killed outside of the Camelot at La Mer apartment complex where she lived, according to the Middlesex County Prosecutor’s Office. Authorities say that Dwumfour, 30, was shot multiple times while sitting inside her SUV.
SAYREVILLE, NJ・1 DAY AGO