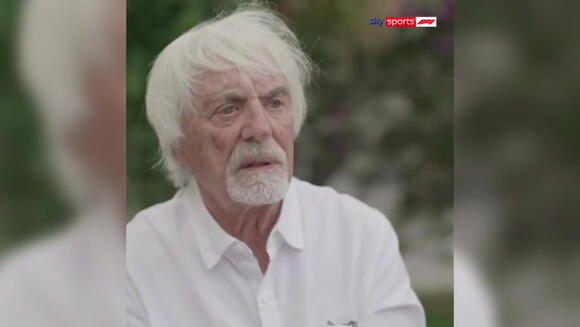 Bernie Ecclestone has finally apologised for saying Vladimir Putin was a “first class person” and that he would “take a bullet” for him.

The former Formula One boss faced a backlash after making the comments during an interview on ITV’s Good Morning Britain last month.

He also said Russia’s invasion of Ukraine on 24 February was “not intentional” and implied the Ukrainian president, Volodymyr Zelensky, could have done more to avoid the war.

It was reported Mr Ecclestone was expected to miss the Austrian Grand Prix on Sunday following the backlash – but he has now apologised for his comments, nine days after making them.

Speaking to Sky Sports, he said: “It would probably be good for me to get some things off my chest as well, things that have been bothering me about what I said and what people think I’ve said.

“Often people, I think, come out and say things or do things without really too much thinking. Probably I did the same, and I can understand people thinking I’m defending what he’s done in Ukraine, which I don’t.

“I was brought up during the war, the last war, so I know what it’s like. And I feel sorry for the people in Ukraine having to suffer for something they haven’t done. They’ve done nothing wrong. They didn’t start anything. They want to get on with their lives.

“They want the kids to go to school, and try and go to work and earn a living to keep the family going. So they don’t deserve to have to suffer. It’s not good for anybody. I can’t see anyone getting anything out of this, and I think they should get together and get an agreement.

“And I’m sorry if anything I’ve said has upset anybody because it certainly wasn’t intended.” Formula One was quick to distance itself from the British businessman’s comments following the GMB interview, with a spokesperson saying: “The comments made by Bernie Ecclestone are his personal views and are in very stark contrast to the position of the modern values of our sport.”

It is not the first time the former F1 boss has defended the Russian president since Russia’s invasion of Ukraine began earlier this year. Last month, Mr Ecclestone told Times Radio he found Mr Putin “very straightforward and honourable”. And back in 2019, he told The Times he felt the Russian leader should be “running Europe”.

“He’s a good guy,” he said then. “He’s never done anything that isn’t doing good things for people. I would like him running Europe. We haven’t got anybody, so it couldn’t be any worse.”

He added: “I am not a supporter of democracy. You need a dictator. As a dictator, you say, ‘This is what I’m going to do.’ In a democracy, it gets watered down.”

Honestly who cares?? it's his life if he wants to take a bullet for Putin then let HIM... That won't affect me my family or my belief in God whatsoever..

He said it. He meant it. The apology just gets people off his back, it doesn’t change his sentiment.

Former President Trump responded Wednesday to Russian President Vladimir Putin’s hinting at being willing to use nuclear weapons in Ukraine, saying that the conflict should never have happened and that it could lead to a world war. Trump said on his social media platform Truth Social that the conflict...
POTUS・7 DAYS AGO
Newsweek

Ukrainian troops are encircling Russian forces in Lyman, an occupied town in the northeast of the country, as Kyiv presses on with its counteroffensive to recapture seized territory. Maps detailing Ukrainian advance in the region amid a continued counteroffensive show its forces moving north across the Siverskyi Donets river from...
MILITARY・12 HOURS AGO
Business Insider

A former CIA officer said Vladimir Putin had been backed into a corner over his war in Ukraine. Robert Baer told CNN the Russian leader was unlikely to deescalate, given all his setbacks. Baer also said the chances that Putin might turn to tactical nuclear weapons were increasing. As military...
MILITARY・1 DAY AGO
Newsweek

A Russian soldier has surrendered to Ukrainian forces, just days after being deployed to fight under President Vladimir Putin's nationwide partial mobilization, according to an official. Anton Gerashchenko, adviser to Ukraine's minister of internal affairs, posted a video on his Telegram channel on Tuesday purportedly showing a Russian soldier who...
MILITARY・19 HOURS AGO

Japan has demanded an apology from Russia after its diplomat was blindfolded and physically restrained during an interrogation and accused of being a spy, deepening a diplomatic row between the two countries.Tatsunori Motoki, who worked at the Japanese consulate general, was detained in Vladivostok in Russia’s far east on allegations that he obtained classified information about Russia, the foreign ministry in Moscow said.On Monday, Russia‘s foreign ministry notified Japan‘s embassy in Moscow that the official had been declared “persona non grata”, or an undesirable person, on grounds that he conducted illegal espionage activity, and ordered him to leave the country...
POLITICS・1 DAY AGO
CNN

CNN senior international correspondent Ben Wedeman reports from Pisky, a town in Eastern Ukraine that has been partially liberated from Russian forces.
POLITICS・14 HOURS AGO
The Independent

Bandy Lee grew up in an immigrant Bronx family of doctors and scientists. Politics never particularly interested her personally or professionally as she pursued a successful career in psychiatry.Until she became so concerned by Donald Trump’s behaviour and rhetoric. She could only call it one thing: Dangerous. Very much so.In 2017, she put together a conference and consulted other medical professionals, then published a book containing 27 essays from psychologists and psychiatrists calling Trump a “clear and present danger.” The book outlined all of the ways a Trump presidency could threaten the country, with writers touching upon his perceived sociopathy,...
POTUS・1 DAY AGO
The Independent

Donald Trump offered up his services to “head up a group” to help international leaders resolve the geopolitical quagmire that has opened after the discovery of gas leaks in major Russian gas pipelines to Europe. On Tuesday, Sweden’s Maritime Authority said it had issued a warning after the...
POTUS・15 HOURS AGO

Pound – live: Calls for Truss to ‘come out of hiding’ to fix ‘economic disaster’

Liz Truss has been accused of hiding away while her tax giveaway mini-Budget caused economic turmoil.On Wednesday, the Bank of England was forced to intervene to prevent a crisis in the UK’s major pension funds.The bank’s decision to buy government bonds - or gilts - was an attempt to calm markets reeling from the government’s mini-Budget last week.There has been no sign of Ms Truss, who was last seen in public sitting on the green Commons benches alongside her chancellor for his statement.Former cabinet minister David Davis said: “This was her manifesto for the leadership, so she has to...
ECONOMY・38 MINUTES AGO
The Independent

Congressman Adam Schiff responded with derision on Sunday to Donald Trump’s assertion that the president of the United States can declassify top-secret materials “just by thinking about it”, without going through a formal review process.Asked by host Jake Tapper to respond to comments the former president made to Fox’s Sean Hannity last week, Mr Schiff quipped that Mr Trump’s remarks “don't demonstrate much intelligence of any kind”.He added that if they truly represented the former president’s beliefs, it made him “more dangerous” than Democrats and his other critics previously believed.“With that view he could simply spout off on anything...
CONGRESS & COURTS・2 DAYS AGO
The Independent

Trump put Giuliani in charge of his legal team because no one else would help overturn election: ‘Go wild’

Former president Donald Trump reportedly tapped Rudy Giuliani to lead his legal team because nobody else wanted to go as far to overturn the 2020 presidential election results, according to New York Times reporter Maggie Haberman’s new book about the former president. The revelation is the latest piece of...
PRESIDENTIAL ELECTION・11 HOURS AGO
The Independent

Trump-backed congressional candidate Joe Kent has been accused of spreading conspiracy theories after he called the Covid vaccine an “experimental gene therapy” during a testy, sold-out debate in Washington state.Little more than 40 days before voters across the country go to the polls in the midterm elections, Mr Kent clashed with Democrat Marie Gluesenkamp Perez, in their first debate in the showdown for Washington’s third congressional district.In a debate held in the city of Vancouver, Washington, located about 150 miles south of Seattle, the pair clashed over abortion rights, whether or not to accept federal funding for local projects,...
PHARMACEUTICALS・15 HOURS AGO

Russia is on course to annex around 15 per cent of Ukraine’s territory within days after claiming that four contested provinces have voted to break away from Kyiv and join Moscow.There were celebrations in Moscow where a giant screen in Red Square displayed messages like  ”Donetsk, Luhansk, Zaporizhzhia, Kherson – Russia!”The Kremlin could move to fold the four separatist-held territories into the Russian Federation on 4 October, just three days before Vladimir Putin’s 70th birthday, the head of the upper house of the Russian parliament said.“This should happen within a week,” Rodion Miroshnik, the Russia-installed ambassador to Moscow of...
POLITICS・40 MINUTES AGO
The Independent

Volodymyr Zelensky rules out talks with Russia if land is annexed

Russia’s “sham referendums” and attempts to annex Ukrainian territory rule out any talks between Moscow and Kyiv, Ukrainian president Volodymyr Zelensky has said.Speaking via video link at the United Nations Security Council, Mr Zelensky urged UN countries to suspend Russia’s membership in the organisation.“Russia’s recognition of these sham referenda as normal, the implementation of the so-called Crimean scenario and another attempt to annex Ukrainian territory, will mean that there is nothing to talk about with this president of Russia,” Mr Zelensky said.Click here to sign up to our newsletters.
POLITICS・7 HOURS AGO
The Independent

Donald Trump took to Truth Social to predict that “war” could be on the horizon after unusual leaks were discovered on Nord Stream I and II, two natural gas pipelines running underwater from Russia to Germany. “This could lead to major escalation, or War!” the former president raged.Meanwhile, his daughter-in-law Lara Trump has come under fire for posting a video of her son outside on a toy car as Hurricane Ian hits Florida. The storm system has hit the state as a category four and federal and state officials have come together in response.The hurricane also caused the Jan...
POTUS・35 MINUTES AGO
Reuters

China signals no let-up in its aggressive diplomacy

BEIJING, Sept 29 (Reuters) - China signalled on Thursday no let-up in its combative approach to foreign policy in a third term for Xi Jinping as leader despite criticism from many Western diplomats that the so-called Wolf Warrior stance has been counterproductive.
CHINA・22 MINUTES AGO
AFP

US Vice President Kamala Harris was in South Korea Thursday to tour the heavily fortified border with the nuclear-armed North, on a trip aimed at strengthening the security alliance with Seoul. Speaking ahead of her meeting with South Korea's President Yoon Suk-yeol, Harris said the countries' alliance was "a linchpin of security and prosperity on the Korean peninsula".
FOREIGN POLICY・10 MINUTES AGO