Northern Ireland should be defined by its rainbow of cultures, not divisions between orange and green, Michelle O’Neill has said.

The Sinn Fein vice president was commenting as she joined members of the Islamic community to celebrate the festival of Eid in Belfast.

More than 1,000 people gathered on the pitches at Davitts GAA club in the west of the city for the largest open air Eid event ever organised in Northern Ireland.

Ms O’Neill, who is line to become Stormont first minister when or if the current powersharing impasse is resolved, wore a hijab as she joined in prayers on Saturday morning.

Later, as she addressed the large crowd, the MLA hailed the Islamic community for the “generous and compassionate” contribution they have made to life in Northern Ireland for decades. “I’m a champion of inclusion and I am here to help make this place which we all belong together a home richer in its diversity,” she said.

“My colleagues have been very vocal in calling out those responsible for the attacks on the Belfast Muslim community and those outrageous acts of criminality,” she said.

“So let me say very clearly here to you all today, we will always stand beside you.

“In our shared humanity, we live in each other’s shadow, and I want you all to know that you are valued.

“I’m working to build a society, not of orange and green, but of a whole rainbow of cultures, multiculturalism, which reflects who we are and where we stand today.” 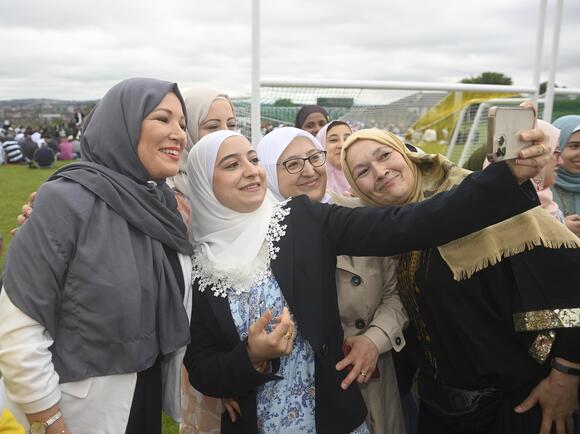 Ms O’Neill added: “It’s our responsibility as political leaders to ensure that we learn from the past, that we continue to make all of our efforts to learn from each other, to build peace, and ensure that we inspire a new generation to value this precious gift that we have, not least here on our own front door.”

Muhammad Atif from the Belfast Multicultural Association praised the GAA and local community in west Belfast for helping to facilitate Saturday’s event.

“They have allowed us to be here in thousands and everybody has been very, very cooperative,” he said.

“It is one of the biggest events ever we’ve managed to do outside in the open.”

Hamdoulilah!!! What a beautiful article its awesome to have someone like Ms. O'Neill that loves diversity and that she welcomes Muslims with open arms as well as stands with them.Hamdoulilah there are people in this worof that still has a good heart and a love of humanity. 😊

The first picture of the new ledger stone installed at the Queen’s final resting place in Windsor has been released by Buckingham Palace. The Queen’s name has been inscribed alongside her mother’s, father’s and husband’s on the stone in the King George VI Memorial Chapel in St George’s Chapel, Windsor Castle, where the monarch was buried.
U.K.・1 DAY AGO
The Independent

The Duke of Sussex was determined to make an impact before Prince George turned 18 as he worried he would become “irrelevant” after that, a new book has claimed.A forthcoming book by The Times’ royal correspondent Valentine Low claims that Prince Harry was frustrated that his advisers “were holding him back” when he wanted to get involved in the same areas as his brother, the Prince of Wales.In an excerpt published in The Times, Low spoke to members of the royal household for his book Courtiers: The Hidden Power Behind The Crown and was reportedly told that Harry held...
CELEBRITIES・1 DAY AGO
The Independent

There is “no clear” evidence that a majority of people living in Northern Ireland support Irish unity, the UK government has claimed.Under the terms of the 1998 Good Friday Agreement, the British Northern Ireland secretary can call a referendum if it appears most residents in the territory back its cessation from the UK.Calls for such a vote grew last week after it was revealed that there are now more Catholics living in Northern Ireland than Protestants, the denomination most likely to favour unionism. This is the first time since partition that Protestants are in the minority.The 2021 census showed that...
POLITICS・46 MINUTES AGO
The Independent

One of Queen Elizabeth II’s pallbearers kept his role in the late monarch’s funeral so quiet, even his mother did not know he was involved until the last minute.David Sanderson was one of the eight soldiers from the 1st Battalion Grenadier Guards who was selected to carry the Queen’s coffin during the state funeral on Monday (19 September).But his family did not know about his important role in the ceremony until they saw pictures of the rehearsal online.Sanderson’s mother, Carolyn, told MailOnline that she had “no idea” because “it was all private to the army”.It wasn’t until they were...
U.K.・1 DAY AGO

Ed Sheeran has pledged his support for the Music Venue Trust’s (MVT) Own Our Venues initiative.Own Our Venues is a long term campaign which launched in June. It aims to intervene to help take ownership on some of the UK’s Grassroot venues.The plan hopes to take control of the freeholds of these venues across the country and put them under a protected status of benevolent ownership.“Own Our Venues is an initiative I’m really passionate about getting behind,” Sheeran said of the scheme, which hopes to raise an initial £3.5m by the end of 2022.“Small, independent venues are so, so...
MUSIC・1 HOUR AGO
The Independent

Royal mourning in memory of the late Queen will end for the monarchy and their households on Tuesday.Since the death of the Queen on September 8, the royal family has only carried out official duties where appropriate, and its members have dressed in black as a mark of respect when in public.From Tuesday they will be able to carry out their normal official roles in full after observing the seven-day period of mourning.Charles carried out one official engagement during royal mourning, holding a telephone audience with the Chancellor Kwasi Kwarteng on Thursday evening, the eve of his tax-cutting mini budget.The...
U.K.・1 HOUR AGO
The Independent

King Charles has been pictured with his red box for the first time.The image, taken last week, shows the King carrying out official government duties in the Eighteenth Century Room at Buckingham Palace.Red boxes contain papers from government ministers in the UK and the realms, as well as Commonwealth representatives.Documents are sent from the private secretary’s office to the King, wherever he is around the world, in a locked, red despatch box.These include papers which require a signature, briefing documents and information about forthcoming meetings.In the picture, Charles is sitting at a desk. Papers, one tied with a ribbon, are...
U.K.・2 DAYS AGO
The Independent

Midwives have warned that too many pregnant women are being sent to prison in the wake of two babies dying behind bars in England in the last three years.Birte Harlev-Lam, executive director midwife at the Royal College of Midwives, told The Independent jail “is no place for pregnant women”.Her warning comes after a woman gave birth to a stillborn baby in the toilet in Styal prison in Cheshire in 2020 after a nurse incorrectly claimed her stomach cramps were due to a “painful period” – with the 31-year-old receiving no specialist medical care or pain relief during labour.While an 18-year-old...
WOMEN'S HEALTH・1 HOUR AGO

Relegation risk and Kenny under the cosh: 5 talking points as Ireland host Armenia

The Republic of Ireland will bring down the curtain on another difficult Nations League campaign when they welcome Armenia to the Aviva Stadium on Tuesday evening.Stephen Kenny’s men lie in third place in their group and need a positive result if they are to avoid relegation to League C.Here, the PA news agency takes a look at some of the talking points surrounding the game.The “R” word🏴󠁧󠁢󠁳󠁣󠁴󠁿 Scotland back on top 📈Matchday 6 decider vs Ukraine 🔜#NationsLeague pic.twitter.com/J4VKT02PGU— UEFA Nations League (@EURO2024) September 24, 2022Kenny set out on his second Nations League adventure targeting top spot in Group B1 and...
SPORTS・45 MINUTES AGO
The Independent

The first picture of the new ledger stone installed at the Queen’s final resting place in Windsor has been released. Queen Elizabeth II’s name has been inscribed alongside her mother’s, father’s and husband’s on the stone in the King George VI memorial chapel in St George’s Chapel, Windsor Castle, where the monarch was buried.The black stone slab has been set into the floor after replacing the old stone that had the names George VI and Elizabeth inscribed in gold lettering.The fresh stone now contains, in list form, “George VI 1895-1952” and “Elizabeth 1900-2002” followed by a metal Garter Star,...
U.K.・1 DAY AGO
The Independent

The peer who organised the Queen’s funeral will argue he should not be banned from driving because he needs his licence to arrange the King’s coronation, a court has heard. The Earl Marshal, the Duke of Norfolk, 65, pleaded guilty at Lavender Hill Magistrates’ Court on Monday to...
U.K.・5 HOURS AGO