'That's who we want to be': Young Pacers please coach Rick Carlisle with unselfish play. 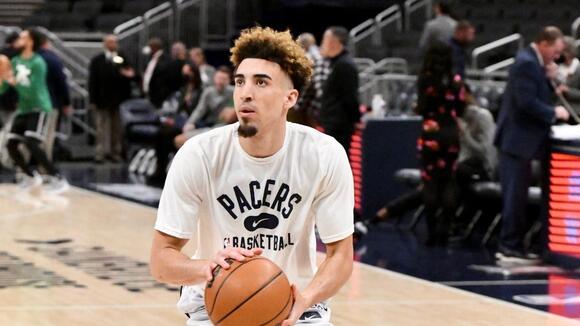 Chris Duarte had a breakout for a layup during Friday's NBA Summer League game against the Charlotte Hornets.

He also saw rookie Bennedict Mathurin charging up the court behind him. So the second-year player tossed the ball off the backboard for a Mathurin flush.

What's coming:Mathurin's debut, 4 other things to watch during Summer League

Carlisle was being interviewed on ESPN2 during the action.

"That's who we want to be in Indiana," the coach said.

Mathurin scored 23 points and Duarte had 16 as the Pacers beat the Hornets 96-84.

The Pacers won their first preseason game on the road in Charlotte, beating the Hornets 122-97, not that the final score is particularly important. It was the first look of several players in a Pacers uniform, and others played together for the first time. Here are five takeaways from the night. Indiana's next action will be Friday night in New York.
INDIANAPOLIS, IN・1 DAY AGO
IndyStar | The Indianapolis Star

'It's pretty different': Pacers rookies adjust to life in NBA on and off the court

INDIANAPOLIS — Bennedict Mathurin’s only obligation is basketball, and he has more free time as a result. For two years in college, he was a student who had to balance class with life on the court. Now he has a full-time job with the Pacers. In his spare...
INDIANAPOLIS, IN・2 DAYS AGO
IndyStar | The Indianapolis Star

What the Pacers are looking for from their first preseason game

INDIANAPOLIS — The Pacers’ first preseason game, Wednesday night in Charlotte, will be a juggling act for coach Rick Carlisle. It’s Indiana’s first action against an opponent that isn’t itself in six months. It’s an opportunity to see a roster filled with newcomers and young players react to its first game together. Carlisle said Tuesday he’d go deep into the bench and the only player not available is center Daniel Theis, who is easing into action after playing in EuroBasket over the summer.
INDIANAPOLIS, IN・1 DAY AGO
IndyStar | The Indianapolis Star

Indiana senior forward and former Center Grove star Trayce Jackson-Davis was named the Big Ten's Preseason Player of the Year on Thursday and was one of three unanimous selections to the 11-member preseason All-Big Ten team. Jackson-Davis, named IndyStar Mr. Basketball in 2019, has been named All-Big Ten in each of his previous three seasons at Indiana. He was named to the second team last year by both coaches and media, first team by media and second...
BLOOMINGTON, IN・14 HOURS AGO

The latest update on Colts RB Jonathan Taylor (ankle) and his status vs. Broncos

INDIANAPOLIS — From the sounds of it, Jonathan Taylor is going to use every second of time available before making any decisions on his sprained right ankle for Thursday night’s game against the Denver Broncos. The Colts’ star running back has never missed a game due to injury,...
INDIANAPOLIS, IN・2 DAYS AGO
IndyStar | The Indianapolis Star

Colts rule Jonathan Taylor out against the Broncos with ankle injury

DENVER - The Colts are not going to push it with Jonathan Taylor on a short week. Indianapolis has ruled out the reigning NFL rushing champion a day ahead of a Thursday night road game against the Broncos. They have also ruled out free safety Julian Blackmon for the second straight game with an ankle injury.
INDIANAPOLIS, IN・1 DAY AGO
IndyStar | The Indianapolis Star

DENVER — Colts defensive end Kwity Paye was carted off with an injury to his lower right leg in the fourth quarter of Thursday night’s game against the Denver Broncos. He was later ruled out. Paye, the 2021 first-round pick, had been one of the most consistent Indianapolis defenders to start the season, recording three sacks and five tackles-for-loss in the first four games of the season. ...
INDIANAPOLIS, IN・3 HOURS AGO
IndyStar | The Indianapolis Star

A matchup of potential Class 4A state championship contenders – possibly the favorites – will highlight the schedule for the six-game Forum Tipoff Classic, one of the annual highlights on the high school basketball schedule. Defending 4A state champion Cathedral, which is led by Michigan State recruit Xavier...
BLOOMINGTON, IN・2 DAYS AGO

Butler football's Don Benbow must have been a saint. He follows me everywhere, even golf

GREENFIELD -- I was eating a pulled pork sandwich with a bag of Lay's potato chips after a golf tournament when a guy washing down carts at Arrowhead Golf Course noticed my name on a scorecard. Lou Hurrle walked inside where nearly 100 golfers sat eating, laughing, drinking beer and...
INDIANAPOLIS, IN・1 DAY AGO