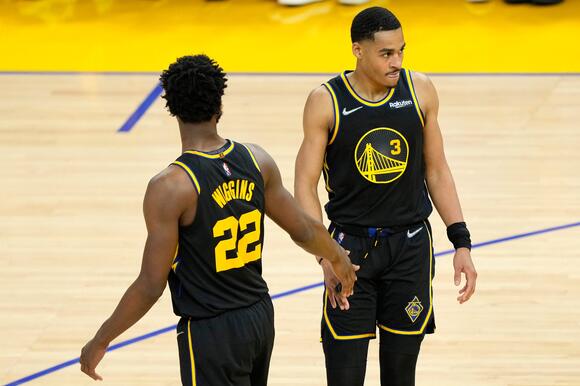 It’s been less than a month since the Warriors were crowned NBA champions. It’s a testament to the lasting greatness of Golden State’s core trio of Steph Curry, Klay Thompson and Draymond Green, who celebrated their momentous accomplishment by taking a well-deserved victory lap around San Francisco. But now it’s on to bigger and better things, chiefly, the Warriors’ pursuit of a fifth title in what would be a nine-year span.

The Warriors find themselves in an enviable position with a loaded roster and an owner, Joe Lacob, willing to spend whatever it takes to build a winner. That said, Lacob isn’t in any rush to extend Andrew Wiggins and Jordan Poole, both of whom are headed for free agency next summer. Appearing as a guest on the TK Show hosted by beat reporter Tim Kawakami of The Athletic , Lacob acknowledged the Warriors will soon face difficult decisions with Poole and Wiggins, each key contributors to this year’s championship team. Sacrifices are inevitable in a salary cap sport, though Lacob remains hopeful of keeping both players.

“We have time to do those things,” assured Lacob. “There’s no rush on all that. I’m sure there will be some discussions this summer. But we haven’t talked to them.”

A former No. 1 pick of the Timberwolves, Wiggins enjoyed a breakout year in 2021-22, achieving All-Star status for the first time while earning praise for his suffocating defense, limiting Jayson Tatum to 21.5 points on dismal 36.7-percent shooting throughout the NBA Finals. Poole, meanwhile, was a candidate for the NBA’s Most Improved Player Award (he ultimately finished fourth behind Ja Morant, Dejounte Murray and Darius Garland), upping his season scoring average from 12.0 to 18.5 points per game.

"They are two great players in their twenties. We’d love to retain them.” said Lacob, content to kick the can down the road another year. “But this becomes the problem going forward when you have a team like ours where you’ve got three guys that have been with us for a long time, making a lot of money.”

The Warriors have shown, at least relative to other teams, a willingness to go over the luxury tax if needed. But if Wiggins continues his superb all-around play and Poole progresses to an All-Star level, it will take a miracle to keep both players from leaving the nest as free agents.

“It's going to be difficult. I’m not going to sit here and lie to the fan base. It’s going to be really difficult to figure out what we’ll do next summer,” said Lacob, as transcribed by Tom Dierberger of NBC Sports . “You’ve got these two guys who will be getting into—well, [Wiggins] is already in big salary mode and wants to stay there. And [Poole] is going to be clearly making a lot more money.”

The Warriors have already lost two rotation players—Gary Payton II and Juan Toscano-Anderson—from their championship team, and next year could see even more turnover with Poole and Wiggins’ expiring deals both coming off the books.

Players at this year's World Cup had a few concerns about the competition, including the compact schedule and the timing of the tournament, and the women took their complaints right to the top
BASKETBALL・25 MINUTES AGO