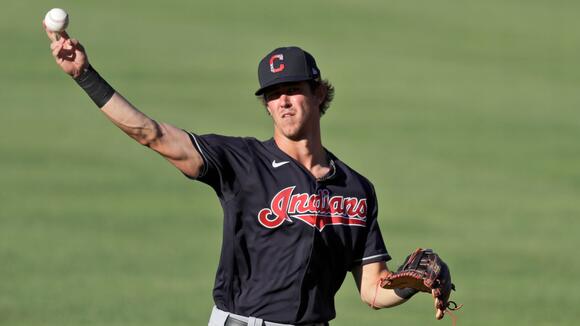 Nolan Jones didn't waste any time in introducing himself to Guardians fans on Friday in his major league debut with the team.

The Kansas City Royals walked off 4-3 on a one-out base hit by Michael Taylor to right in the bottom of the ninth, but Jones, a second round pick in the 2016 draft, had a night to remember.

And the former top prospect in the Guardians organization didn't wait long in creating a lasting memory.

He jumped on a 1-1 pitch from Brady Singer in the second inning and roped a two-out double down the right-field line to score Owen Miller and give the Guardians an early one-run lead.

Starting in right field and batting seventh, Jones' memorable night continued with a base hit to center field in the seventh before he was lifted for pinch runner Oscar Mercado.

The versatile Jones finished 2-for-3 with an RBI.

"I just want to go out there and enjoy every moment," he told Bally Sports Great Lakes. "I've got my family here. They've been with me through everything. ... They have always supported me and all my siblings.

"I have all my siblings here, so I just want to go out there and have fun. This is a dream come true for me. It's something I've wanted my entire life, so I'm going to soak this first one in and then we start getting to work."

Friday's performance was just more of the same for an oft-injured Jones, who has absolutely torn it up this season at the minor league level.

In 23 games with the Class AAA Columbus Clippers, Jones batted .311. 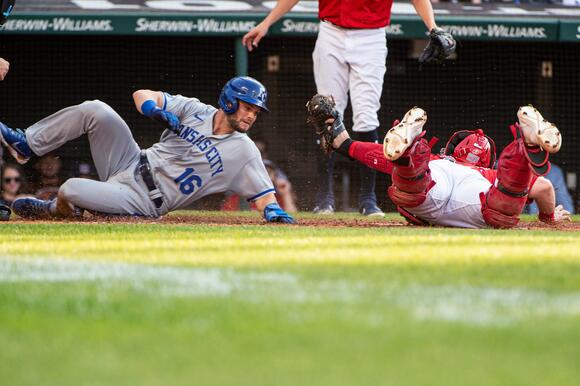 Jones wasn't the only transaction the Guardians made prior to the series opener against the Royals.

Catcher Austin Hedges was activated off the seven-day injured list and Sandy Leon was designated for assignment.

Hedges returned after going on the injured list with a concussion retroactive to June 26.

He is batting .156 this season with five home runs and 15 RBIs. Hedges got the start against the Royals and was 0-for-3 with two strikeouts and stranded two base runners.

The Guardians also optioned outfielder Richie Palacios to Columbus to make room for Jones and Hedges.

Palacios batted .250 in 39 games with the Guardians and had five doubles and 10 RBIs.

In another move, the Guardians traded relief pitcher Yohan Ramirez to the Pittsburgh Pirates for cash considerations.

He had been designated for assignment on July 4 before the trade.

CLEVELAND — Rookies Oscar Gonzalez and Steven Kwan drove in runs in the eighth inning as the Cleveland Guardians kept Tampa Bay from clinching one of the AL’s three wild-card spots, rallying to beat the Rays 2-1 on Thursday night. The Central champion Guardians took two of three...
CLEVELAND, OH・1 DAY AGO
Akron Beacon Journal

Jose Ramirez homers, Emmanuel Clase gets 40th save in Guardians' win over Royals

CLEVELAND — José Ramírez hit a three-run homer and Emmanuel Clase closed for his major league-leading 40th save in the Guardians' 6-3 victory over the Kansas City Royals on Friday night. Ramírez put the American League Central Division champion Guardians ahead for good at 4-3 in the...
KANSAS CITY, MO・16 HOURS AGO
Akron Beacon Journal

CLEVELAND — Pinch-hitter Amed Rosario had a base-loaded single in the 10th inning to give the Cleveland Guardians a 2-1 victory over the Tampa Bay Rays on Wednesday night. Rosario, who wasn't in the starting lineup as manager Terry Francona rests his regulars after wrapping up the the AL Central, batted for Luke Maile. He lined the first pitch over the head of right fielder Manuel Margot to score Oscar Gonzalez from third base.
CLEVELAND, OH・2 DAYS AGO
Akron Beacon Journal

Guardians outfielder Will Brennan has chance to impact playoff roster

Will Brennan has the distinction of being the 16th rookie to make his major league debut for the Guardians in 2022. He also has a distinct chance of playing a significant role on the Guardians' playoff roster. Brennan had his contract selected from Triple-A Columbus on Sept. 21, and in his short time...
BASEBALL・9 HOURS AGO

Corey Kluber returns to Cleveland to face Guardians: 'You don't lose your fondness for guys'

Three Cy Young Awards. Two familiar windups. One ace that led Cleveland to Game 7 of the World Series in 2016, and another that hopes to do that and more in October. Tuesday's matchup featured the two best pitchers to don a Cleveland uniform in the 21st century, Corey Kluber and Shane Bieber. Kluber, with the Tampa Bay Rays, brought his familiar delivery, though in an unfamiliar uniform. Perhaps it was fitting, in a way, for Kluber...
CLEVELAND, OH・2 DAYS AGO
Akron Beacon Journal

The key to Andres Gimenez's breakout 2022: eliminating the leg kick

Like a puzzle piece that falls into place and suddenly brings the entire picture into view, one key swing adjustment played a major role in unlocking Andres Gimenez's swing and leading to his breakout 2022 season. Gimenez, a central part of the Francisco Lindor (and Carlos Carrasco) blockbuster deal with...
MLB・1 DAY AGO
Akron Beacon Journal

An overtime loss might crush many a football team; It should drive CVCA to bigger heights

CANAL FULTON − If you think a 29-28 overtime loss in Principals Athletic Conference play to Northwest is going to keep CVCA down, you haven't watched much Royals football this season. CVCA (5-2, 3-1) has been living on adversity all season, so a league game that took a 2-point conversion to lose probably won’t keep the Royals from their ultimate goal, which is a late playoff run. ...
CANAL FULTON, OH・9 HOURS AGO
Akron Beacon Journal

BEREA − The Browns had hoped to bring their young defensive ends along this season. They hoped they could sit back and learn from two former No. 1 overall picks, getting their feet wet with a handful of rotational snaps. It's Week 4 and the Browns' plan has been crumpled up and thrown...
CLEVELAND, OH・8 HOURS AGO

The heart of Hudson: Nick Savelli doesn't let Down Sydrome stop his role with soccer team

With all due respect to Tyler Travis and his nine goals and eight assists, he’s not the pulse of the Hudson boys soccer team. The same can be said about Sam Robledo (5 goals, 4 assists) and Ben Mihalek (3, 3) and not one of them mind. The unquestioned MVP is team manager Nicholas...
HUDSON, OH・1 DAY AGO