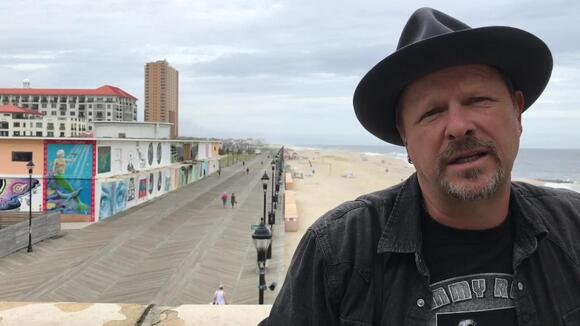 There will be a generation-spanning British invasion of the Sea Hear Now festival in Asbury Park this September.

Eighties icons Boy George and Culture Club and brand-new indie rockers Wet Leg, both from the U.K., have been added to the 2022 lineup of the Sea Hear Now festival, which takes place which takes place Sept. 17 and 18 on the city's beach and Bradley Park.

Green Day and Stevie Nicks are the headliners.

Culture Club racked up the hits with “Do You Really Want to Hurt Me,” “Time (Clock of the Heart),” “I'll Tumble 4 Ya,” “Church of the Poison Mind,” “Karma Chameleon,” and more. In the '80s, outspoken lead singer Boy George was at the forefront of the era's gay rights movement.

Wet Leg, Rhian Teasdale and Hester Chambers from the Isle of Wight, broke through with the new wave-y rocker “Chaise Longue” in 2021.

Tickets, starting with two-day general admission for $255.15 (fee included), are available via www.seahearnowfestival.com.

Other performers at the 2022 fest include My Morning Jacket, Billy Strings, Cage the Elephant, Gary Clark Jr., The Head and the Heart, IDLES, Courtney Barnett and more. Locals making the show include Dogs in a Pile, Dentist, Lost in Society and the Vansaders. Wall native Fletcher, known for her synth-pop hit “Undrunk,” is also on the bill.

Pearl Jam and Smashing Pumpkins were the headliners of the 2021 edition of Sea Hear Now. The fest was canceled in 2020 due to COVID-19. It debuted in 2018 with Jack Johnson and Incubus headlining. The Dave Matthews Band and Lumineers were on the top of the bill in 2019. The 2020 lineup was largely held over for the 2021 fest.

The Sea Hear Now also features a visual art component and surfing, too.

Sea Hear Now is produced by C3 Presents, the team behind Lollapalooza, and locals Danny Clinch and Tim Donnelly. Clinch is a Toms River native who has photographed the greats of music, from Bruce Springsteen to Tupac Shakur.

Subscribe to app.com for the latest on the Jersey music scene.

Bruce Springsteen is on the soul patrol. A teaser reel of snippets of soul covers was released a few minutes past noon on Wednesday, Sept. 28, on the Boss' social media accounts. The visual was an AM radio in the dashboard of the late model car playing the music. ...
INTERNET・2 DAYS AGO
App.com | Asbury Park Press

Don't bring wine to a water fight. Angelina Pivarnick and Nikki Hall, girlfriend of Pauly DelVecchio, got into a serious water and wine fight in San Diego on the Thursday, Sept. 29, episode of “Jersey Shore Family Vacation.”. Things escalated considerably when Pauly broke down the door of the...
SAN DIEGO, CA・1 DAY AGO