Boris Johnson must not be allowed to stay as caretaker PM, John Major tells 1922 Committee 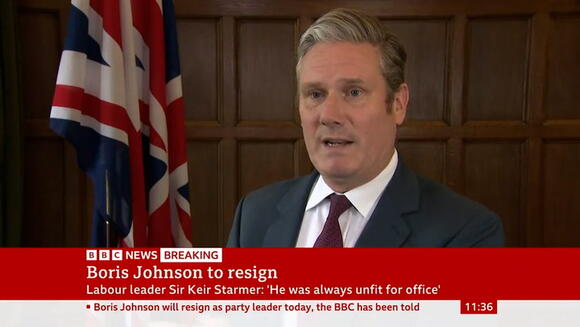 Boris Johnson must not be allowed to stay at No 10 as a caretaker prime minister over the summer, Sir John Major has said.

In an extraordinary intervention, the former Conservative PM has written to the chair of the 1922 Committee of backbenchers to suggest it would be “unwise” and “unsustainable” for him to stay on for up to three months.

In his letter to Sir Graham Brady , Sir John said: “The proposal for the prime minister to remain in office – for up to three months – having lost the support of his cabinet, his government and his parliamentary party is unwise, and may be unsustainable.”

The former PM said he was worried that Mr Johnson would still have the power to make vital domestic and foreign policy decisions, and maitains “the power of patronage” to make crucial appointments.

“Some will argue that his new cabinet will restrain him. I merely note that his previous cabinet did not – or could not – do so,” the former PM warned.

Or, he suggested, Tory MPs could elect the new leader who would become PM, with party members then asked to endorse the decision – effectively removing the members’ stage of the leadership ballot.

The former PM admitted: “Neither of these options is ideal”, before saying the situation required “an imaginative response even at the risk of some bruised feelings within the party”.

Sir John urged Sir Graham to make sure Mr Johnson should not remain “for any longer than necessary to effect the smooth transition of government”.

Or, he suggested, Tory MPs could quickly elect the new leader who would become PM, with party members then asked to endorse the decision – effectively removing the members’ stage of the leadership ballot.

The intervention comes as senior Tory MP Nus Ghani, deputy chair of the 1922 Committee, said Mr Raab should take over from Mr Johnson immediately on an interim basis.

George Freeman – who quit as science minister earlier today – tweeted: “Boris Johnson needs to hand in the seals of office, apologise to Her Majesty and advise her to call for a caretaker prime minister to take over today.”

Rebel Tory Aaron Bell, a red wall MP from the 2019 intake, said: “I think it would be better for the country if we had a caretaker prime minister.”

Business secretary Kwasi Kwarteng also suggested Mr Johnson should not stay until October, as has been suggested – saying a new leader is needed “as soon as practicable”.

However, one senior Tory figure ridiculed Sir John’s “not very wise” idea and said people should accept a leadership contest can be complete by early September.

“Over August very little happens in government – in some ways it couldnt fall at a better time,” they told The Independent . “Calm down and get on with the process of a replacement.”

Despite frustration about Mr Johnson’s messy exit, one red wall MP told The Independent there was no “appetite” among backbenchers to push for Mr Raab to take over.

Sir Bob Neill said in the Commons there is a “serious question mark” over how long a caretaker PM can remain in place given concerns about effective government, adding: “Might it be in everybody’s interests to speed up the transition as much as possibly can be?”

Despite several vacant junior ministerial posts, Cabinet Office minister Michael Ellis insisted: “Government business will continue to function. Other secretaries of state can deal with the issues for other departments.”

Tory MP Andrew Bridgen said he was worried about “further damage” Mr Johnson could do while he remains caretaker – but said he had been told it would be unconstitutional to install someone else immediately.

He suggested Mr Johnson could still say he was “unwell” and let Mr Raab take over. Challenged on Sky News over whether Mr Johnson was unwell, Mr Bridgen said: “That depends on who you ask.”

Labour will stage a Commons vote to try to force Mr Johnson out of No 10 immediately, if he tries to stay on as caretaker.

Keir Starmer urged Conservative MPs to “get rid of him” now – rather than serve a two-month interim period, while a successor is elected, saying: ”He can’t cling on in this way.”

Rishi Sunak has vowed that he will "ratchet up" the return of migrants to Albania during an interview with Piers Morgan. The prime minister said the level of illegal migration to the UK from Albania is "ridiculous," and shared details of his new deal."If you come here illegally, you should be swiftly detained and then in a matter of days or weeks we will hear your claim," he said. Morgan's grilling of Sunak will be aired on TalkTV at 8pm this evening, 2 February - his 100th day in office. Click here to sign up for our newsletters. Read More Budget 2022: Hunt says UK in recession as he announces huge tax risesJeremy Hunt increases energy windfall tax in budgetJeremy Hunt freezes tax allowances and hits 45p rate payers
3 HOURS AGO
The Independent

Voices: I was bullied and demeaned by Dominic Raab

Towards the end of 2016, in a very febrile environment unleashed by the Brexit referendum, I was the lead claimant in a judicial review about Brexit. This case sought clarification from the court on whether the government could trigger Article 50 to exit the European Union without parliamentary approval.Having not been a politician or political commentator, the media rounds that ensued were quite terrifying. I had, however, worked in financial services since 1996, so had encountered my fair share of bullies and misogynists. In 2010, I started a campaign to stop the dubious behaviours that led to the Global...
1 HOUR AGO
The Independent

Putin vs the West review: World leaders seem rightly shamefaced about how they got taken for a ride by the Russian president

Putin vs the West is the latest series from the legendary Norma Percy, and the three-parter contains everything you’d expect from the veteran documentarian – the right blend of revelation, anecdote, history, drama, forensic analysis and storytelling. It’s Putin, the Ukraine war and how the West fouled up, all made comprehensible. It’s brilliant, and you have to watch it to understand how we got to where we are now. It is in fact so brilliant that you find yourself in the unexpected position of being almost on the edge of your seat listening to the testimony from the half-forgotten dullards – such as former...
2 DAYS AGO
The Independent

The family of a man who died after being restrained by police have urged officers to “tell the truth” ahead of giving evidence at the inquiry.Kadi Johnson will appear at the public inquiry into the death of her brother, Sheku Bayoh, on Tuesday morning, the first of his family to do so.Mr Bayoh died after he was restrained on the ground by six police officers in Kirkcaldy in 2015, and the inquiry is investigating the circumstances of his death and whether race was a factor.Ahead of her Ms Johnson’s appearance, her family held a vigil outside the inquiry venue, Capital House...
2 DAYS AGO
The Independent

The EU has pledged to train an extra 15,000 Ukrainian soldiers as part of a raft of announcements at the start of a two-day visit to Kyiv by European leaders."Russia is paying a heavy price as our sanctions are eroding its economy, throwing it back by a generation. We will keep turning up the pressure further," the president of the European Commission, Ursula von der Leyen, told a joint news conference with Ukranian President Volodymyr Zelensky.Ms Von der Leyen, who will be attending an EU-Ukraine summit in Kyiv on Friday, said there would be more military, financial and political aid...
1 HOUR AGO
The Independent

The Home Office has ordered asylum units to work solely on Albanian claims in a bid to speed up deportations – forcing other nationalities to suffer longer waits.Sources say the push, codenamed Operation Bridora, aims to declare as many applications from Albanians “clearly unfounded” as possible and remove people from the UK after a surge in numbers arriving on small boats.There are concerns that it will delay decisions for thousands of Afghans, Iranians, Syrians and asylum seekers from all other countries, with many already waiting years to find out whether they will be granted protection.“It’s discrimination,” a source familiar...
2 HOURS AGO
The Independent

No tension between UK and Australia on colonial past, says Foreign Secretary

The Foreign Secretary said there was “no tension” between the UK and Australia after a visiting minister urged Britain to confront its “uncomfortable” colonial past.James Cleverly said it was not possible to “erase your history”, but it was important that London was “conscious” of it when dealing with former colonial countries such as Australia.The UK Government is looking to forge stronger ties in the Indo-Pacific to counter China’s growing influence in the region, with Canberra seen as a key ally.But Penny Wong, Australia’s Malaysia-born foreign minister, told an audience at King’s College London this week that countries such as Britain...
3 HOURS AGO
The Independent

MSPs have voted to back the Scottish Government’s tax and spending plans in a Holyrood vote.Deputy First Minister John Swinney said the budget for the next year would deliver on the “priorities of a progressive government”.MSPs voted to back the Budget (Scotland) Bill by 68 votes to 56 at stage one.Under plans initially announced in December, taxes on the highest earners in Scotland will increase in response to rising inflation.For completeness to the convener, I am still wrestling with an estimated overspend... of approximately £100 millionJohn SwinneyMr Swinney set out plans to raise taxes on higher earners, with the top...
2 HOURS AGO
The Independent

Wales’ nationalist party has proposed raising taxes to give NHS workers a pay rise and end the strikes taking place across the country.Plaid Cymru said it will call on the Welsh Government next week to amend their draft budget to raise the basic rate of income tax that people in Wales pay by 1p, the higher rate of tax by 2p, and the additional rate of tax by 3p.Leader of the party Adam Price said the move would generate an extra £317 million which could provide health and care workers with fairer pay.Mr Price said the money could be used...
3 HOURS AGO
The Independent

The hit to the UK economy from Brexit is coming through faster than had previously been expected, the Bank of England deputy governor has said.Ben Broadbent said it was still not clear whether the effects of EU withdrawal were a reason why the UK is forecast to do worse than other major economies this year.His comments follow a warning by the International Monetary Fund (IMF) that Britain alone of the leading economies is expected to contract this year.Labour said it underlined the needed for the UK to build a new trading relationship with its closest neighbour and trading partner.Speaking at...
3 HOURS AGO
The Independent

Families of Omagh bomb victims have welcomed the ordering of an independent inquiry into the atrocity.Twenty-nine people, including a woman pregnant with twins, were killed when a dissident republican car bomb ripped through Omagh town centre on August 15 1998.Northern Ireland Secretary Chris Heaton-Harris told the Commons on Thursday he is establishing the inquiry in response to a court judgment that directed the Government to carry out some form of investigation into alleged security failings.The blast, which occurred months after the signing of Northern Ireland’s historic Good Friday peace agreement, inflicted the highest death toll of any incident during the...
3 HOURS AGO