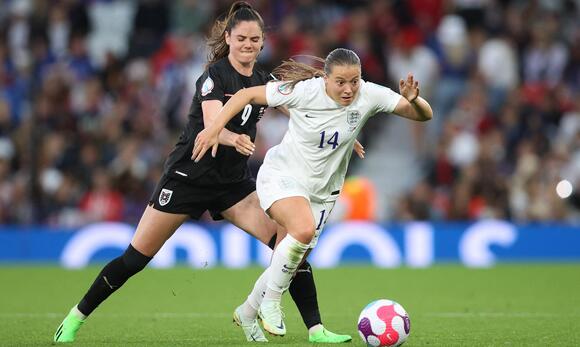 I would always want my former teammate Fran Kirby in my England team. Who wouldn’t? It did not look like it would be a possibility in the months leading up to the Euros because of fatigue problems but in the 63 minutes Kirby played of the opening-game victory over Austria she showed how important she is to this England side.

It might not have been the 5-0 or 6-0 victory the 68,871 inside Old Trafford wanted but it is the perfect platform to build on, especially after all the pressure on the hosts coming into the Euros. Tournament football is all about momentum and three points against Austria puts England in a good position going into their second match, against Norway on Monday. I have had my concerns about England’s goalscoring and this was shown at Old Trafford but when it mattered Kirby made the difference.

Kirby is England’s most creative player in the No 10 role and showed her qualities to make the goal for Beth Mead. Few people in the women’s game would have been able to pick out the pass which allowed Mead to lob the goalkeeper. Mead did incredibly well to control the ball and finish but it was a piece of brilliance by Kirby to find her in a small amount of space.

Kirby is unique and was at the heart of everything England did well going forward while she was on the pitch. She has the ability to break the lines with her running and passing but she also worked hard to win the ball back to put Austria on the back foot. Kirby showed her ability off the ball by making a clever run to help create a chance for Lauren Hemp in the first half.

A No 10 is the team’s maverick. They need to be given the ball as much as possible to express themselves and do the things others cannot. I think Kirby’s teammates need to get the ball to her quicker because she is the one who can create magic moments to win games.

Considering Kirby missed months of the season with Chelsea because of fatigue, it was fantastic to see her out there. The one thing you can certainly say about her is she is very resilient. I thought she might only be able to be an impact player off the bench but she is proving everyone wrong and hopefully she will be able to play longer as the tournament progresses. When you have someone coming back from injury or illness, the key is to build them up, not break them down. Pushing a player too much before they are ready can be detrimental and Sarina Wiegman has the right idea to get the best out of her playmaker.

All one has to do is look at Kirby’s contribution last season for Chelsea, where she was the leading goal creator with 11 assists despite her long absence. She was joint fourth in the league, too, which is no small feat. She played only 25 matches but was a creative force and scored 11 goals to go with her assists.

The focus for Kirby, when I have spoken to her this past season, has always been to get healthy. As long as she is fit, she is a star player in any side. She is not going to lose her qualities because of a few months out but she needs to rebuild her match fitness to maximise what she can offer. In the friendlies before the tournament she looked sharp and she showed that again on Wednesday. Hopefully she can build momentum and confidence and recreate the form she has shown for Chelsea down the years.

Kirby also brings a wealth of tournament experience. She has 58 caps and appeared at the 2017 Euros and the 2015 and 2019 World Cups, so she knows what is required, which can only help her and her teammates.

England created 10 chances on Wednesday but only five efforts were on target. They will need to be more ruthless because they cannot not win every game with a single goal. They have shown in recent months the strength in depth available to Wiegman and the manager will not be afraid to use it to get the best results. Nikita Parris and Beth England spent the night on the bench and they would get into the majority of sides in this tournament.

England showed they are defensively strong, something Wiegman has ensured since taking over. The back four coped extremely well with late pressure from Austria, although there was also a key Mary Earps save from Barbara Dunst’s shot. To win major tournaments a robust defensive foundation is a must, especially when you are not creating too many chances. It will give confidence to the attack-minded players, knowing what they have behind them. It should liberate them to take more chances and be more progressive in possession.

The win against Austria will have helped to alleviate the pressure and grow the confidence of the England team, and the glimpses of their creative leader doing what she does best will be a much‑needed boost before Monday’s crucial match.

Worcester Warriors: the inside story of a rugby club’s demise | Michael Aylwin

With all employees out of work and the club’s future hanging by a thread, administrators are set to pore over the club’s finances. What will they find? There is a lot to unravel…
RUGBY・3 HOURS AGO
The Guardian

Country music has sometimes been described as the authentic blue collar voice of the American south. In the past half-century no singer and songwriter did more to justify that claim than Loretta Lynn, who has died aged 90. In the words of the music historian Bill Malone, Lynn’s songs “spoke for working-class women in a way no ardent feminist could ever do”.
CELEBRITIES・1 DAY AGO
The Guardian

Stephen Colbert: ‘There’s a reason the Russian army is getting its ass kicked – it sucks’

Stephen Colbert checked in on Russia’s war in Ukraine on Monday evening, after Vladimir Putin forced four regions of occupied eastern Ukraine to hold sham votes. On Friday, Putin announced in a speech that Russia would officially annex the regions. “Congratulations, guys!” the Late Show host deadpanned.
CELEBRITIES・1 DAY AGO
The Guardian

The city’s water department has a small yet effective solution to keep its famous residents’ water use in check – a flow restrictor
LOS ANGELES, CA・2 DAYS AGO

Loretta Lynn, whose tales of heartbreak and poverty are among the most celebrated in the country music canon, has died aged 90. Lynn died at home in Hurricane Mills, Tennessee, on 4 October, her family confirmed. Beginning with 1966’s. Your Mind) , she topped the US country charts 16...
HURRICANE MILLS, TN・1 DAY AGO
The Guardian

The home secretary’s chilling rhetoric lays the ground for the harshest immigration environment yet, says writer and academic Maya Goodfellow
IMMIGRATION・14 HOURS AGO

Franca Fendi, one of the five sisters who inherited a small Roman leather goods workshop and together transformed it into a luxury fashion house, has died in Rome on Monday. She was 87. Born in 1935, she participated from a young age in the management of the company that from...
BEAUTY & FASHION・7 HOURS AGO
The Guardian

Iga Swiatek criticised tennis authorities as she revealed she will not play for Poland at the Billie Jean King Cup Finals in Glasgow next month. The world No 1 had planned to represent her country but believes the lack of time between the WTA Finals in Texas and the Glasgow event would make it too risky to participate.
TENNIS・2 DAYS AGO
The Guardian

The Russian president, Vladimir Putin, has appeared to concede the severity of the Kremlin’s recent military reversals in Ukraine, insisting Russia would “stabilise” the situation in four Ukrainian regions it illegally claimed as its own territory last week. Russia has suffered significant losses in two of the...
POLITICS・6 HOURS AGO
The Guardian

‘It was change or die’: why morris men are now welcoming morris women

Age: Both ancient and modern. Appearance: Like morris men, but women. Don’t be silly. I’m all for equality, but morris dancers are exclusively men. That has not always been the case. I’m not going to argue with you – but yes it has. There are records of women...
ENTERTAINMENT・2 DAYS AGO
The Guardian

They both started wars in neighbouring countries, hold significant sway over energy markets, are known to brook no dissent and to covet spots in history. Russia’s embattled president, Vladimir Putin, and Saudi Arabia’s de facto ruler, Mohammed bin Salman, seem to have a lot in common. Nearly eight...
ECONOMY・12 HOURS AGO
The Guardian