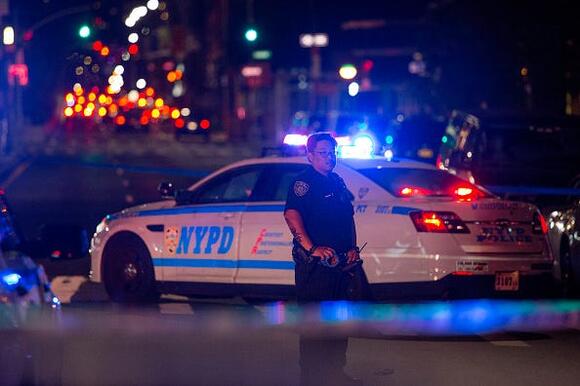 NEW YORK (1010 WINS) -- A man riding an e-bike on a Bronx street early Wednesday was critically injured after he collided with a vehicle, the NYPD said.

Police responded to a 911 call of a vehicle collision at approximately 4 a.m. at East 149th Street and Grand Concourse in the South Bronx.

A preliminary investigation determined that a 41-year-old man was riding an e-bike westbound on East 149th Street when he collided with an Infiniti sedan, which was traveling southbound on the Grand Concourse.

The e-bike operator sustained severe trauma to his head and was transported via EMS to NYC Health + Hospitals/ Lincoln, where he is listed in critical condition.

The 44-year-old male operator of the Infiniti remained on the scene and was not injured. The NYPD's Collision investigation Squad is investigating.

Authorities are searching for two men seen firing a gun from a moped on a Bronx street that struck a 75-year-old man over the weekend.
BRONX, NY・4 HOURS AGO
1010WINS

Police officials are investigating the death of a man following a motorcycle collision in the Bronx early Sunday, according to authorities.
BRONX, NY・1 DAY AGO
1010WINS

The NYPD released photos on Tuesday of three suspects wanted for firing their guns into a crowd on a Bronx street earlier this month, authorities said.
NEW YORK CITY, NY・5 HOURS AGO
1010WINS

Officials are investigating the death of a man found in a Bronx residential building on Monday night, authorities said.
BRONX, NY・1 HOUR AGO

A homeless man walking on the FDR Drive in Manhattan Sunday night was fatally struck by a hit-and-run driver.
MANHATTAN, NY・1 DAY AGO
1010WINS

Man, 28, dropped off in front of Brooklyn hospital with fatal gunshot wounds

The NYPD is searching for a suspect who punched an MTA worker in an unprovoked attack in the Bronx last week, authorities said.
BRONX, NY・1 DAY AGO
1010WINS

A Flatbush landlord was sentenced Tuesday to six months in prison in connection with a 2019 two-alarm fire at his illegally subdivided apartment building that left a 70-year-old tenant dead and injured six others, the Brooklyn DA’s office announced.
BROOKLYN, NY・24 MINUTES AGO

Police have arrested a man who beat his 37-year-old boyfriend to death in their Bronx apartment Saturday.
BRONX, NY・20 HOURS AGO
1010WINS

Officials are investigating the fatal shooting of a teen boy by a group of suspects in the Bronx Sunday evening, authorities said.
BRONX, NY・1 DAY AGO
1010WINS

A man crashed into a Queens KFC restaurant Monday while trying to escape police in a carjacked vehicle after robbing a Rite Aid store, authorities said.
QUEENS, NY・16 HOURS AGO
1010WINS

A 63-year-old man is in critical condition after he was struck by a pick-up truck at a Morris County intersection Monday night, police said.
CHATHAM, NJ・1 HOUR AGO

A 28-year-old New Jersey man was gunned down at a basketball court early Sunday and police are looking for the suspect responsible.
HOBOKEN, NJ・15 HOURS AGO
1010WINS

An employee at a Lower East Side smoke-shop was shot while he confronted a trio of robbers outside of the store late Sunday, officials said.
NEW YORK CITY, NY・23 HOURS AGO
1010WINS

4 separate overnight shootings in the Bronx leaves 1 dead, 3 others wounded

A string of overnight shootings in the Bronx left one dead and three others injured, authorities said.
BRONX, NY・2 DAYS AGO
1010WINS

2 NJ men arrested after trying to break into car, fleeing in stolen vehicle

Two New Jersey men were arrested after getting caught attempting to break into a car while using another vehicle they stole earlier in the day, authorities said.
SECAUCUS, NJ・22 HOURS AGO
1010WINS

One person was killed and another was injured after a fire engulfed a Hempstead home early Monday.
HEMPSTEAD, NY・23 HOURS AGO
1010WINS

A 16-year-old girl was arrested as the last suspect in the fatal beating of a Queens taxi driver that took place last month, police announced on Friday.
QUEENS, NY・2 DAYS AGO
1010WINS

A woman was fatally struck by a car in Brooklyn Sunday morning after she fell in the roadway while trying to get into her boyfriend’s car, authorities said.
BROOKLYN, NY・2 DAYS AGO
1010WINS

NJ woman, 68, found dead by firefighters putting out blaze in her home

An investigation is underway after a 68-year-old woman was found dead by firefighters responding to a small fire at her New Jersey home Sunday.
SOMERVILLE, NJ・19 HOURS AGO