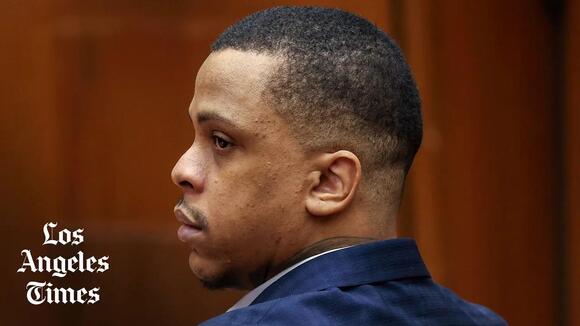 Eric Holder Jr., the gang member who killed rapper Nipsey Hussle, was convicted of first-degree murder Wednesday and will likely spend the rest of his life in prison for gunning down the beloved Crenshaw musician and community figure.

Hussle, an ascendant rap artist and himself an avowed Crips gang member, was signing autographs for fans on March 31, 2019, outside a clothing store he owned in the Crenshaw neighborhood where he grew up when Holder approached. Holder departed after a brief conversation but returned several minutes later and shot Hussle 11 times. Two other men were also shot but survived.

Police arrested Holder in nearby Bellflower two days later, after the woman who served as his unwitting getaway driver turned herself in and identified him as the gunman.

Holder’s guilt was not in question throughout his two-week trial, with multiple witnesses confirming his identity and the shooting captured on security cameras. Rather than arguing for an acquittal, Holder’s attorney, Aaron Jansen, tried to persuade jurors they should convict his client of a lesser manslaughter charge instead of murder.

Jansen’s argument hinged on the words that Holder and Hussle, whose real name was Ermias Asghedom, allegedly exchanged before the shooting. The two men had been members of the Rollin 60s, a subset of the Crips street gang that has long dominated Crenshaw, since they were teenagers. Witnesses at trial testified that Hussle had warned Holder there was “paperwork” on him — an implication there were court or police records showing Holder had cooperated with police on an investigation.

No one knew of hussle when I was listening to him. I had put a couple people on to his music and I'm from the east. His music and his interviews were different. He knew what he wanted to say and how to say it. Sad that we don't get to see how big he could've become. This one hurts.

A crew member of an NBC show is shot and killed in Brooklyn, N.Y.
BROOKLYN, NY・20 DAYS AGO
TMZ.com

Popular Louisiana rapper JayDaYoungan was fatally ambushed by 5 gunmen ... according to his father, who was there when his son was gunned down. The slain rapper's dad, Kenyatta Scott, tells TMZ ... he and JayDaYoungan were sitting in the front yard of their Louisiana home Wednesday evening when a black truck pulled up and 3 people hopped out with guns.
BOGALUSA, LA・9 DAYS AGO
Fox News

A South Florida woman has been sentenced to life in prison plus additional time for her role in a murder-for-hire plot that resulted in the shooting death of a local law professor. Katherine Magbanua was sentenced Friday morning to life behind bars without the possibility of probation or parole, as...
TALLAHASSEE, FL・10 DAYS AGO
Black Enterprise

Rapper Trina is joined with family mourning the loss of her niece, who was fatally shot in her hometown of Miami. Sources confirmed that Trina’s niece, who she affectionately referred to as “Baby Suga,” was killed Tuesday night, TMZ reports. Sources say the young woman was in the wrong place at the wrong time.
MIAMI, FL・20 DAYS AGO

A 15-year-old boy who was tortured and killed by his mother and her partner in a campaign of “utterly horrific and prolonged” torture was murdered by the two people he “should have been able to trust the most in the world”, a senior prosecutor has said.
PUBLIC SAFETY・18 DAYS AGO
Daily Mail

A man from Merseyside has been sentenced to 19 years in jail after stabbing a house intruder to death in October of last year. Karl Townsend, a 32-year-old father from Halewood, had been cleared by a jury of murdering burglar Jordan Brophy outside his home. However, earlier this week, Townsend...
PUBLIC SAFETY・4 DAYS AGO
truecrimedaily

STOCKTON, Calif. (TCD) -- A homeless woman was taken into custody for allegedly killing her lover by setting his tent on fire. According to the Stockton Police Department, on July 7 at around 5:30 p.m., a 40-year-old woman and 35-year-old man were inside a tent at Airport Way and Mormon Slough when the suspect allegedly lit the tent and the two victims on fire. They were transported to a nearby hospital, but the male died from his wounds.
STOCKTON, CA・19 DAYS AGO

Mystikal stands accused of rape again in Louisiana ... and he's back behind bars after a weekend arrest. A rep for Ascension Parish Sheriff's Office tells TMZ ... the rapper was booked and processed Sunday on a first-degree rape charge, as well as charges related to domestic abuse, battery by strangulation, false imprisonment and property damage.
ASCENSION PARISH, LA・8 DAYS AGO
Black Enterprise

More than two dozen women in an Indiana prison claim they were raped and assaulted by male inmates have filed two separate lawsuits. According to Newsweek, a group of female inmates at the Clark County Jail in Indiana filed a lawsuit July 22 alleging two male prisoners were allowed access to their prison cells after they bribed a prison officer.
CLARK COUNTY, IN・12 DAYS AGO
Fox News

Two Black teenage girls in New York City were arrested on Tuesday and charged with hate crimes over the brutal attack on a 57-year-old White woman riding a bus in Queens earlier this month. The New York Police Department said that a 15-year-old girl and a 16-year-old girl were arrested...
QUEENS, NY・13 DAYS AGO
truecrimedaily

CINCINNATI (TCD) -- A 25-year-old man was arrested months after his girlfriend and mother of his two children was found dead in what police initially said was a fatal drug overdose. According to Cincinnati Police, on Feb. 15 at 2:50 a.m., officers went to the 300 block of West Galbraith...
CINCINNATI, OH・24 DAYS AGO

A woman who police say opened fire in a Dallas, Texas airport this week claims to be “God’s prophet” and also married to Chris Brown. Portia Odufuwa has reportedly given authorities the R&B star’s address more than once, saying she lived with him. The 37-year-old allegedly...
DALLAS, TX・12 DAYS AGO
CBS LA

A $100,000 reward for information is being offered in the capture of a San Fernando Valley gang member who was added Wednesday to the FBI's Ten Most Wanted Fugitives list. Omar Alexander Cardenas was identified by the LAPD as the suspect in an Aug. 15, 2019 shooting that killed a man standing outside the Hair Icon Barber Shop on Foothill Boulevard. The man, 46-year-old Jabali Dumas, died from a gunshot wound to the head."Jabali Dumas was gunned down by Omar Cardenas nearly three years ago, and there is still no justice for him or his family," LAPD Chief Michel Moore...
LOS ANGELES, CA・20 DAYS AGO
Insider

A New Orleans police officer Lil Wayne referred to as 'Uncle Bob' is dead. The rapper spent his career praising him after he saved his life.

Robert Hoobler was found dead on Friday in his home in Jefferson Parish, Louisiana. Hoobler saved Lil Wayne's life after the rapper attempted to commit suicide at the age of 12. Lil Wayne called Hoobler "Uncle Bob" and offered to financially support him in 2019.
NEW ORLEANS, LA・16 DAYS AGO
truecrimedaily

Va. mom gets 55 years for torturing, killing 2-year-old son whose body was found in steam plant

HAMPTON, Va. (TCD) -- A mom of 10 was sentenced to 55 years in prison after she pleaded guilty to killing her 2-year-old son, who was found dead in a steam plant in 2019. Virginia court records show a judge sentenced Julia Tomlin to 40 years for second-degree murder, 10 years for abuse of a child causing serious injury, and five years for concealing a dead body in connection with the death of Noah Tomlin.
HAMPTON, VA・13 DAYS AGO
Jeffery Mac

UPDATE: A Suspect Named In The Disappearance of Felicia Marie Johnson

Felicia(Central Texas Crime/Facebook) Recently, we covered the disappearance of Felicia Marie Johnson — a black woman who vanished after interviewing for a job. Now, police are starting to get answers.
HOUSTON, TX・27 DAYS AGO
The US Sun

POLICE have been left baffled by the "suspicious" deaths of two sisters found decomposing in their flat. Asra Abdullah Alsehli, 24 and Amaal Abdullah Alsehli, 23, were found dead in their beds in separate rooms of their Sydney apartment on June 7. But over a month on, the circumstances surrounding...
PUBLIC SAFETY・13 DAYS AGO
WashingtonExaminer

Mother of Uvalde shooter lashes out at victim's family

The mother of the gunman responsible for the deadly mass shooting at Robb Elementary School in Uvalde, Texas, was caught on video yelling at the mother of one of her son's victims. Adriana Martinez, the mother of Uvalde shooter Salvador Ramos, who was killed by law enforcement, told the grieving...
UVALDE, TX・19 DAYS AGO
Power 102.9 NoCo

The police footage from Kodak Black's recent South Florida arrest has surfaced online. On Sunday (July 31), YouTube channel Thin Blue Line uploaded video from Kodak Black's arrest in Fort Lauderdale, Fla. on July 15. In the video, Yak's orange-and-blue Dodge Durango is pulled over by officers for expired tags and illegal tint. Video shows the Florida rapper standing next to a police cruiser speaking with officers. He tells them he just got back from Detroit, where he recently performed.
FORT LAUDERDALE, FL・8 DAYS AGO