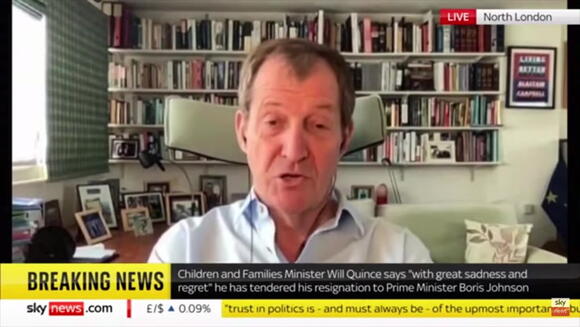 Alastair Campbell clashed with Kay Burley after the Sky News presenter described Boris Johnson as the “most successful” prime minister since the turn of the century.

Tony Blair’s former director of communications also suggested Mr Johnson is “a liar, a crook and a charlatan”.

“This guy is the worst prime minister this country has ever had,” Mr Campbell said.

“Honestly Kay, the guy is a liar, a crook, a charlatan. You know that, I know that, everybody in the country knows that.”

Boris Johnson made a significant verbal slip-up as he thanked Vladimir Putin instead of Volodymyr Zelensky for his “inspirational leadership”.In his first major contribution as a backbench MP during a Commons debate, the Conservative former prime minister said it is important to “double down in our defence of the Ukrainians” if Mr Putin doubles down on his “aggression”.As he listed the reasons why Ukraine’s counter-offensive is proving to be successful, though, Mr Johnson inadvertently thanked Mr Putin for his “inspirational leadership”, before quickly correcting himself and thanking Mr Zelensky.He said: “Thanks to the heroism of the Ukrainian armed forces,...
POLITICS・1 DAY AGO
The Independent

Sir Keir Starmer said the Labour conference is the party’s chance to “set out the alternative” to the Tory Government’s “casino economics”.Arriving in Liverpool on Saturday ahead of the annual gathering, the Labour leader said Prime Minister Liz Truss and Chancellor Kwasi Kwarteng had shown their “true colours” with their raft of tax cuts that mainly benefit the wealthy.Sir Keir’s supporters hope he will use the four-day conference, which kicks off on Sunday, to capitalise on the unpopularity of the new administration’s economic measures.Tory casino economics is gambling the mortgages and finances of every family in the country. Labour will...
WORLD・2 HOURS AGO
The Independent

Conservative MPs have rounded on the government after a Treasury minister described criticism of plans to give high earners a tax cut during a cost of living crisis as the “politics of envy”.Furious fellow Tory MPs hit out at the comment by Chris Philp, the chief secretary to the Treasury, just hours after the chancellor, Kwasi Kwarteng, announced he was scrapping the highest rate of tax, paid by those earning more than £150,000 a year. Mr Kwarteng was accused of betting on trickle-down economics after he unveiled a total of £45bn worth of tax cuts alongside massively...
INCOME TAX・34 MINUTES AGO
The Independent

Labour deputy leader Angela Rayner has revealed the contents of a mysterious note she was handed in the House of Commons on the day Queen Elizabeth II died.The note, handed over to Ms Rayner and prime minister Liz Truss during an intense debate on the energy crisis in the parliament, grabbed everyone’s attention. It was widely suspected that it communicated something about the Queen’s health. Moments after TV cameras and journalists caught wind of the note, the country learned that the UK’s longest-reigning monarch was under medical supervision at Balmoral.Now, the Labour leader has broken her silence on the...
POLITICS・1 HOUR AGO

Voices: How fascinating – Tory Corbynism is likely to be as successful as the Labour version

Benjamin Zander, the conductor, taught his students not to swear when they made a mistake, but to say: “How fascinating.” This is good advice for political commentators too. I didn’t think Liz Truss would win the Conservative leadership election, and I didn’t think that, having won it, she would stick in government to her policy of tax cuts for the rich.She didn’t just stick to it, though, she went further. In the closing stages of the leadership campaign she dismissed a chart showing that the better-off would gain most from cutting national insurance contributions by saying she was just...
ELECTIONS・4 HOURS AGO
Insider

Prince Harry and Prince William walked side by side at the Queen's funeral on Monday. The decision wasn't a PR stunt, according to King Charles' former butler Grant Harrold. Harrold said the brothers showed they were "a united family" leading up to the funeral.
CELEBRITIES・1 DAY AGO
The Independent

The Prince and Princess of Wales did not cancel or rearrange their family skiing holiday to accommodate the return of Prince Harry and Meghan to the UK in September, a new book claims. In the forthcoming book The New Royals: Queen Elizabeth’s Legacy and the Future of the Crown, it...
CELEBRITIES・2 DAYS AGO
The Independent

The Duke of Sussex was determined to make an impact before Prince George turned 18 as he worried he would become “irrelevant” after that, a new book has claimed. A forthcoming book by The Times’ royal correspondent Valentine Low claims that Prince Harry was frustrated that his advisers “were holding him back” when he wanted to get involved in the same areas as his brother, the Prince of Wales.
CELEBRITIES・6 HOURS AGO

The Duke of York allegedly “lobbied very hard” to try and stop King Charles III from becoming the monarch after Queen Elizabeth II died, it has been claimed. An explosive new book delving into the life of Camilla, Queen Consort, by royal commentator and biographer Angela Levin, alleges that Prince Andrew tried to convince his late mother to make Prince William king instead.
U.K.・1 DAY AGO
The Independent

Author Hilary Mantel has died “suddenly yet peacefully” aged 70, her publisher Harper Collins said on Friday 23 September. Fans and peers of the prolific British writer are paying tribute to her many critically adored works, including the Wolf Hall trilogy set during the Tudor period. As well as writing about historical royal figures, Mantel was also known for her observations about the current British royal family. Read The Independent’s tribute to Hilary Mantel.In September last year, she said that she did not believe that Prince George, the eldest son of the Prince and Princess of Wales, would ever...
BOOKS & LITERATURE・1 DAY AGO
The Independent

A ministerial body intended to accelerate scientific research in the UK appears to have been scrapped barely a year after it was set up.The National Science and Technology Council (NSTC) was established by Boris Johnson in June 2021 as a cabinet committee that the then-prime minister said would help cement the UK’s position as a “global science superpower”.But less than three weeks after taking office, Liz Truss seems to have abolished the council, which does not appear on the list of cabinet committees published on Friday.In August 2022, a House of Lords committee said the NSTC had met only three...
SCIENCE・1 HOUR AGO
The Independent

England’s fracking ban has been lifted as Liz Truss’s Government vowed to explore all avenues to improve energy security, setting Downing Street on a collision course with environmental campaigners.Business and Energy Secretary Jacob Rees-Mogg said the impact of Vladimir Putin’s invasion of Ukraine means securing domestic energy supplies is vital as he defended lifting the moratorium on fracking, which has been in place since 2019 after a series of tremors caused by the process.Mr Rees-Mogg suggested limits on acceptable levels of seismic activity are too restrictive and said the Government is determined to “realise any potential sources of domestic gas”.Fracking...
ENERGY INDUSTRY・2 DAYS AGO

The Scottish Government will continue to pursue a “fairer and more progressive approach to taxation”, one of Nicola Sturgeon’s ministers has said.Richard Lochhead spoke out as Tories in Scotland urged SNP ministers in Holyrood to follow the UK Government’s example and reduce taxes.While policies announced in Friday’s mini budget saw Prime Minister Liz Truss branded a “Margaret Thatcher tribute act” by the Scottish Labour leader, Anas Sarwar; Conservatives north of the border hailed the “extraordinarily ambitious measures”.Scottish Tory leader Douglas Ross called on the Scottish Government to follow the example of UK Chancellor Kwasi Kwarteng, after he axed the top rate...
INCOME TAX・3 HOURS AGO
The Independent

Government dismisses criticism of tax cuts as ‘politics of envy’

The Government is not concerned about the “politics of envy”, a Treasury minister said as its raft of tax cuts came under fire for disproportionately benefiting the rich.Labour accused Prime Minister Liz Truss and Chancellor Kwasi Kwarteng of gambling with people’s finances in “casino economics” and said their “trickle-down” approach will leave the next generation worse off.Using more than £70 billion of increased borrowing, Mr Kwarteng on Friday unveiled the biggest programme of tax cuts for 50 years, including abolishing the top rate of income tax for the highest earners.Tory casino economics is gambling the mortgages and finances of every...
POLITICS・2 HOURS AGO
The Independent

Voices: Time’s up for the Tories: Labour doesn’t just have a vision for this country – we have a plan

Britain is at a crossroads. We are at a moment of decision about what future we want and what our country could be.The scars of the pandemic remain etched on our public services. War has returned to Europe once again. And we face a cost of living crisis leaving millions with the agonising decision of heating or eating. The stakes couldn’t be higher.But at this moment, what does the new prime minister have to say to working people?When she could be bringing people together, Liz Truss has chosen to line the pockets of energy executives and big bankers rather...
POLITICS・4 HOURS AGO
The Independent

Lewis Capaldi left Naga Munchetty red-faced when he got into a rude word mix-up during a BBC Breakfast interview.The singer told co-host Charlie Stayt he had “great hair” when the pair got into a back-and-forth of complimenting each other.“Would you like a room?” Munchetty said jokingly, with a confused-looking Capaldi asking: “Would I what?”After she repeated the question, Capaldi added: “I thought you said a rim.”Munchetty immediately moved on, citing that she'd be having 'a word' with him.Click here to sign up for our newsletters. Read More Culture secretary hints at scrapping BBC license fee68 pairs of twins hit the runway for Gucci at Milan Fashion WeekParis Hilton shocks fans by closing the Versace show at Milan Fashion Week
CELEBRITIES・3 HOURS AGO
The Independent

One of Queen Elizabeth II’s pallbearers kept his role in the late monarch’s funeral so quiet, even his mother did not know he was involved until the last minute.David Sanderson was one of the eight soldiers from the 1st Battalion Grenadier Guards who was selected to carry the Queen’s coffin during the state funeral on Monday (19 September).But his family did not know about his important role in the ceremony until they saw pictures of the rehearsal online.Sanderson’s mother, Carolyn, told MailOnline that she had “no idea” because “it was all private to the army”.It wasn’t until they were...
U.K.・2 HOURS AGO