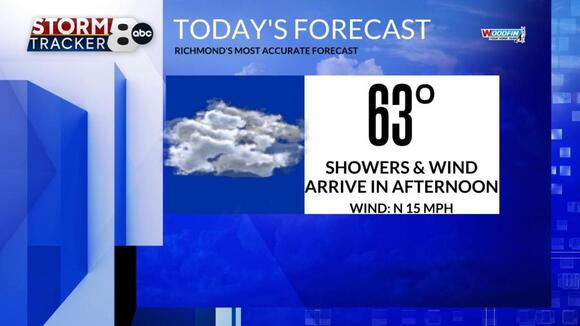 RICHMOND, Va. (WRIC) – Yesterday turned out pretty nice! We got rid of the morning showers and just as expected, we largely stayed dry. In fact, some even saw the sun!

The remnants of Ian currently in West Virginia will move kind of East then a bit Southeast, bringing us rain again today and increase our winds. Rain will move into the area from North to South today, with activity increasing in the afternoon. Rain will be light with no threat for severe weather.

However, we will be seeing the winds increasing as the rain arrives. Winds will be out of the north and while quiet in the morning, will increase to 15-25mph this afternoon, with a few gusts higher than that possible.

Today’s rainfall will only amount to a few tenths of an inch for most; though if you live in Ashland or areas north, you will be seeing 1/4-1/2″ through about 10pm.

Winds do not let up overnight. In fact, they may increase a tough. Clouds and a few showers stick around overnight with a low of 49.

Monday and Tuesday’s forecast will be HIGHLY dependent on where you live. The remnants of Ian moving through Virginia today will merge with a coastal low and park right off the coast for Monday and Tuesday. The extent of the rain will depend on where it settles. Even a few days out, models differ on where it decides to stay. If it hangs out just off the coast, it will be pretty wet for both Monday and Tuesday for most of the area. However, if it shifts a bit farther east and sits there, we will be seeing a whole lot less rain, particularly for areas East of I-95. Right now I think both are too extreme–it won’t be a washout for everyone those days, but it also won’t be mainly dry.

I think a good bet for Monday and Tuesday will be to expect scattered showers for most of the area, turning heavier on Tuesday as the system exits. Areas east of I-95 will see quite a bit more rain than areas west. It’s also going to be windy during this entire period, with winds still out of the north at 10-25mph. On top of that, it’s going to be seasonably cool with highs only in the 50s–a cool, breezy, and wet start to our week! Below is the rainfall TOTAL forecast from this morning through Tuesday at 8am (and more rain is expected Tuesday).

High pressure builds in beginning on Wednesday, finally starting a dry period. Temperatures will rebound to closer to average. Wednesday we’ll see clouds moving out and a high in the lower 70s. Thursday and Friday will be mostly sunny with mid and upper 70s.

A cold front moves through Friday into Saturday. It won’t have enough forcing to bring much cloud cover and it’s looking to move through dry too, but it will drop temperatures heading into next week. Expect sunshine and low to middle 60s next Saturday and Sunday.

Still just that one area to watch that is off the western coast of Africa. It has a 20% chance of further development in 2 days; 70% chance in 5 days.

Jesus said before His great return He would mix up the seasons, floods, and all sorts of back to back weather in places never seen before throughout the world. Look, isnt that what is happening and more to come. Im not religious but I believe in His every word. Get ready ppl.

Rain chances will increase today into this evening. It will be much cooler Monday & Tuesday with highs in the 50s.
RICHMOND, VA・9 HOURS AGO
WRIC - ABC 8News

Northern Neck ferries not running as storms continue throughout Virginia

The Virginia Department of Transportation has suspended service on both ferries on the Northern Neck, including the Merry Point Ferry, due to inclement weather expected for the rest of the weekend.
LANCASTER COUNTY, VA・1 DAY AGO
WAVY News 10

Weather Blog: What to expect overnight and into the weekend from Ian

The rain from Ian arrived into Hampton Roads Friday morning and continues to fall Friday evening. We expect to see periods of rain overnight with rain eventually tapering off after midnight.
ENVIRONMENT・1 DAY AGO
WRIC - ABC 8News

Richmond soldiers on in spite of stormy weather

Hurricane Ian may have been downgraded to a "Post-tropical Cyclone," but that hasn't meant Richmonders aren't still weathering a serious storm.
RICHMOND, VA・1 DAY AGO

According to the NWS, major flooding is forecasted in the Hampton Roads and Eastern Shore areas, Richmond is expected to reach near-flooding levels in the next several days.
RICHMOND, VA・1 HOUR AGO
Newsradio WRVA

Rain will turn more scattered during the day Saturday. Rain chances will ramp back up again for Sunday.
2 DAYS AGO

ROANOKE, Va. – It’s a combination that doesn’t sound right. A hurricane one minute, and snowflakes falling the next. The weather world in our corner of the world started buzzing Friday evening with reports of snow and sleet mixing in with the rain associated with Ian. How...
VIRGINIA STATE・1 DAY AGO
Newsradio WRVA

RICHMOND, VA (September 29, 2022) – All eyes should be on the forecast as Ian marches out into the Atlantic to re-intensify before moving back ashore in The Carolinas and then moving inland. Hurricane Ian roared ashore in southwest Florida yesterday as a Category 4, causing widespread damage in that part of the state. Even though the storm will have weakened substantially by the time it reaches many parts of Virginia, it will still be packing plenty of rain.
RICHMOND, VA・2 DAYS AGO
WVNT-TV

As Ian begins to enter Virginia, storms are expected in many counties and cities throughout the commonwealth. As of 1 p.m. on Friday, Sept. 30, Tornado watches have now been issued for three Southeast Virginia counties.
VIRGINIA STATE・2 DAYS AGO
WRIC - ABC 8News

The Virginia Department of Transportation’s Richmond District crews are prepared to respond to any severe weather emergencies throughout the weekend as the remainder of Tropical Storm Ian reaches Virginia.
VIRGINIA STATE・23 HOURS AGO
WRIC - ABC 8News

WASHINGTON (Nexstar) — As part of the efforts to collect scientific data on hurricanes, and accurately forecast the path and strength of the storms, hurricane hunters from NOAA fly directly into storms. One of those hunters, Nick Underwood, flew into the strongest part of Hurricane Ian on Wednesday. He said it was the most intense […]
ENVIRONMENT・2 DAYS AGO
BlueRidgeLife

Winds From Ian To Affect Area : Wind Advisory For Parts Of Blue Ridge

Hundreds of customers will remain without power across SW Virginia

(WDBJ) - UPDATE: Danville Utilities’ says they will be unable to restore service to all customer tonight. One of the areas they won’t get restored on Saturday is the Hunting Hills Road and Golf Club Road areas. Crews tried to complete the repair of poles damaged from a fallen tree on Route 41, but weren’t able to finish.
VIRGINIA STATE・1 DAY AGO
WBOY 12 News

Virginians prepare for change of plans, event cancelations due to severe weather from Ian